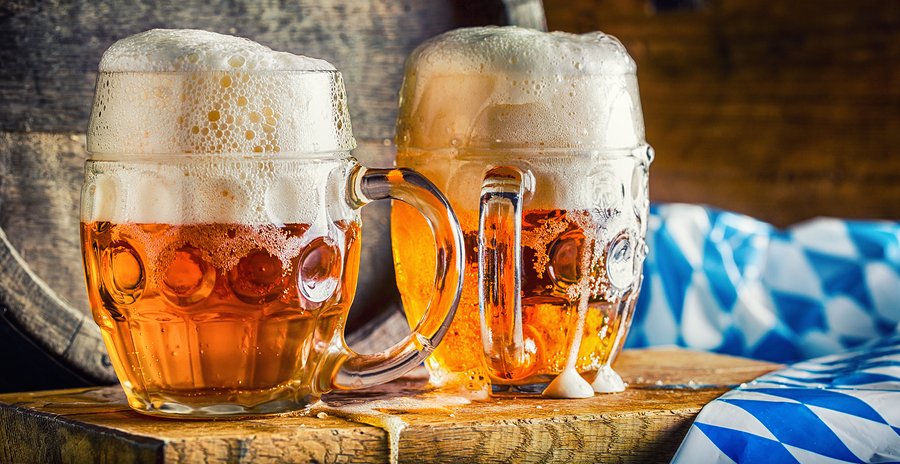 When desire stalks us, we humans seek a way to prove that our craving is justified. This certainly is evident in the food world where one study after another sets out to discover the health benefits of fun treats like chocolate, coffee, and wine. And so it’s no surprise that beer also has been investigated in an effort to find its healing virtues. Sure enough, there’s plenty of research proving that beer is great for health, including a new study that should tickle those who right now are sitting down with a can of Bud in hand.

The new research, out of the University Hospital of Basel in Switzerland, concluded, in essence, that beer makes you cheerier all around.1 Dallas, Mary Elizabeth. “Cheers! Beer makes people happier, maybe even sexier.” 20 September 2016. CBS News. 23 September 2016. http://www.cbsnews.com/news/drinking-beer-makes-people-happier-maybe-sexier/ This was discovered after sixty subjects agreed to drink enough beer to make them slightly tipsy for the good of science. Half of the participants were slipped nonalcoholic beer, while the other half got the real thing—enough to raise their blood alcohol level to 0.4 grams per liter. This is the legal limit for drivers in Lithuania. In Sweden and Poland, the legal guidelines are stricter at 0.2, but in wine-happy countries like Italy and Spain, it’s 0.5, and for those who really like to tie one on, the US, Ireland, and the UK will tolerate up to 0.8.2 http://ec.europa.eu/transport/road_safety/specialist/knowledge/pdf/alcohol.pdf In other words, at 0.4, the subjects got just the tiniest bit tipsy.

After imbibing, each group was invited to perform a series of tasks. First, the participants reviewed photos of faces and identified the moods expressed. They also took tests to evaluate their levels of empathy and sexual arousal.  Then, after they had sobered up, the participants got yet another drink, but this time, the substances were switched, with the nonalcoholic beer group getting the real thing, and vice versa. Sure enough, after drinking the real beer, the subjects recognized happy faces faster.3 “Drinking beer helps us see happy faces faster.” 18 September 2016. Science Daily. 23 September 2016. http://www.sciencedaily.com/releases/2016/09/160918214439.htm They also displayed more empathy and a stronger desire to connect with others socially. Plus, they were more tolerant of sexual imagery. According to lead researcher Matthias Liechti, these effects were considerably stronger in women than in men and also (not surprisingly) in those who were uptight to start with.

Numerous articles in the news announced the results with headlines like, “Drinking Beer Makes People Happier, Even Sexier” (CBS), and “Surprise! Beer Makes You Happier, Friendlier” (BioSpace). But the results are questionable for several big reasons. First, noticing happy faces doesn’t mean a person actually feels happier, and tolerating sexual imagery doesn’t mean the person is sexier. In fact, the study found that in spite of that tolerance to sexual imagery, the subjects were not in a state of greater sexual arousal.

In any event, it may not be beer per se that makes people “happier” and “sexier,” as the media trumpets. Rather, it might be that a very mild level of inebriation does the trick no matter whether it’s a beer or a margarita. And it also might be that as the level of inebriation increases, the negatives far overwhelm whatever positives a single drink confers, in terms of mood, cognition, and health. It’s an important distinction, because otherwise, those inclined to drink heavily might use the study to justify a potentially health-destroying habit, and the beer industry will attempt to sell more beer by spinning the results.

And yet, there are advantages to light beer drinking according to not just this study, but other studies as well, particularly for brain health. One study in 2014, for instance, concluded that when people over the age of 60 who don’t already have dementia drink alcohol (not just beer) in moderate amounts, they improve their ability to recall past events.4 “If you’re over 60, drink up: Alcohol associated with better memory.” 23 October 2013. Science Daily. 23 September 2016. http://www.sciencedaily.com/releases/2014/10/141023092031.htm Drinking also seems to be associated with developing a larger hippocampus, which is the part of the brain associated with long-term memory and spatial navigation—and the part of the brain affected first in cases of Alzheimer’s and dementia. 5 Mandal, Ananya, MD. “What is the Hippocampus?” News Medical Life Sciences. 25 September 2016. http://www.news-medical.net/health/Hippocampus-What-is-the-Hippocampus.aspx
Likewise, previous studies on animals found that drinking moderate amounts of alcohol increased the number of nerve cells in the hippocampus and instigated the release of cells dealing with information processing.

While these studies didn’t specify that beer offered any advantage over other alcoholic beverages, one study did. Research just a few months ago compared the effects of beer, wine, and liquor consumption to see how much β-amyloid accumulated in the brain after imbibing each beverage. (β-amyloid build-up is associated with dementia and Alzheimer’s.)6 Research Society on Alcoholism. “Is beer good for the brain?” 1 June 2016. Science Daily.  25 September 2016. http://www.sciencedaily.com/releases/2016/06/160601132001.htm And guess what? Only beer seemed to make a difference. Those who drank beer had less accumulation of β-amyloid than normal, while those drinking other beverages had average amounts. The researchers concluded that beer, and beer alone, must have some sort of protective impact. And so the implication is, if you look at all the evidence taken together, then drinking beer, at least in the “golden years,” might be one way to stave off Alzheimer’s.

Also, aside from its impact on brain health, beer is high in antioxidants, like wine, and the studies say it promotes heart-health. In fact, according to one study, beer drinkers have a 42 percent lower risk of heart disease compared to abstainers, as long as consumption is limited to one pint. 7 Domonell, Kristen. “10 Reasons to Have a Beer Right Now.” 27 December 2015. Men’s Health. 26 September 2016. http://www.menshealth.com/health/have-a-beer  Research also has found that drinking beer (as opposed to wine and other drinks) may prevent hypertension, protect the kidneys, fight off infection, improve bone density, and prevent cataracts and diabetes. But again, the proviso here is that the positive effects are only reaped when consumption is quite limited. As the warning on the label says, drink too much and bad things may follow, from developing cancer to getting fat to getting arrested for being just a little too “happy” in public.