Walking Yourself with the Dog 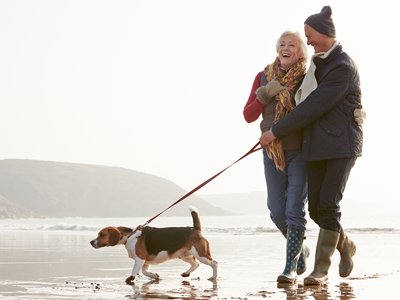 Advertisements for dog products are full of fit looking canines running around with their equally trim owners. But the reality is often quite different. According to the Association for Pet Obesity Prevention, 53 percent of adult dogs have been deemed overweight or obese by their veterinarian. However, in this news there exists a silver lining of sorts. New research suggests that owners who are made aware of the health dangers of their dog’s weight appear more motivated to exercise alongside their pet.

The study, which took place at the Uniformed Services University of the Health Sciences in Bethesda, Maryland, found that a veterinary warning to pet owners expressing concern over the excess pounds on their dog prompted the people to become more physically active with their pets.1 Reynolds, Gretchen. “Exercising a Fat Dog (and Yourself).” New York Times. 10 December 2014. Accessed 17 December 2014. http://well.blogs.nytimes.com/2014/12/10/pet-weight-gain/?_r=1 The subjects were 32 adults who brought their pet dogs to a veterinary clinic in Maryland. Both the humans and the dogs were weighed and all of the dogs (along with many of the humans) were either overweight or obese. Most of the dogs were reported to be fairly inactive.

The participants were randomly divided in half into two groups. One group was informed by a veterinarian that their dog was too heavy and they needed to be more careful about restricting its diet and keeping an eye its health. To the other group, a veterinarian stated that the dog was carrying excess weight and an increase in exercise was essential. This group was also provided with a recommended exercise regimen for the dog that typically included taking the dog for walks for a minimum of 30 minutes per day.

A follow-up appointment was made for all of the volunteers and their canine pals three months afterward that included a weigh-in for both people and pets. Not surprisingly, those in the group told to walk their dogs lost weight along with their animals. The less expected outcome was that the group told only to watch their dogs’ weight also took up physical activity and shed extra pounds with their pets. Their concern for the health of their dogs led them to take walks much more frequently than they had prior to the first appointment.

While this study is included only a small number of subjects, it is pretty well known that dog owners are in general a population very dedicated to their pets. In fact, a 2013 study at the University of Vienna in Austria found that the bond between people and their dogs is very similar to that of a parent-child bond.2 Horn, Lisa; et al. “The Importance of the Secure Base Effect for Domestic Dogs–Evidence from a Manipulative Problem-Solving Task.” PLoS ONE. 29 May 2013. Accessed 18 December 2014. http://www.plosone.org/article/info%3Adoi%2F10.1371%2Fjournal.pone.0065296 So it’s not much of a leap to say it is likely that the results in the current research would be replicated in a larger trial.

If we care so much about our dogs, why let them get heavy in the first place? Aside from the fact that we could say the same about ourselves or our children in many cases, it appears that dog owners are typically split between two extremes. A large segment of them tend to be very active and spend a lot of time outside with their four-legged friends. A 2011 study at Michigan State University in East Lansing showed that of 5902 respondents 41% owned a dog, and of these, 12% walked their dogs for 10 minutes or less, 61% walked their dog for at least 10 minutes at a time, a 27% walked their dog at least 150 minutes per week (the amount of moderate exercise recommended by the American Heart Association).3 Reeves, Mathew; et al. “The Impact of Dog Walking on Leisure-Time Physical Activity: Results From a Population-Based Survey of Michigan Adults.” Journal of Physical Activity & Health. March 2011. Accessed 18 December 2014. http://journals.humankinetics.com/jpah-back-issues/jpah-volume-8-issue-3-march/the-impact-of-dog-walking-on-leisure-time-physical-activity-results-from-a-population-based-survey-of-michigan-adults But more significantly, dog walking was associated with a significant increase in owner walking and leisure time physical activity (LPTA). Compared to non-dog owners, the odds of obtaining at least 150 minutes per week of total walking were 34% higher for dog walkers, and the odds of doing any LTPA were 69% higher.

If you’re one of the sedentary owners who spends most of her quality time with their dog just lazing about together on the couch–the moment has come for you to both get moving. Like the participants in the Maryland study, you may not have much motivation to improve your own physical fitness, but you probably love your dog enough to do it for her. Overweight dogs are at higher risk for joint problems, diabetes, high blood pressure, and respiratory issues. So if you want to keep your pup healthy and around for as long as possible, initiate a program of long daily walks and outdoor exercise for a good cardiovascular workout. And if your kids are couch potatoes in the cold weather, get them in on the routine to improve their fitness as well.