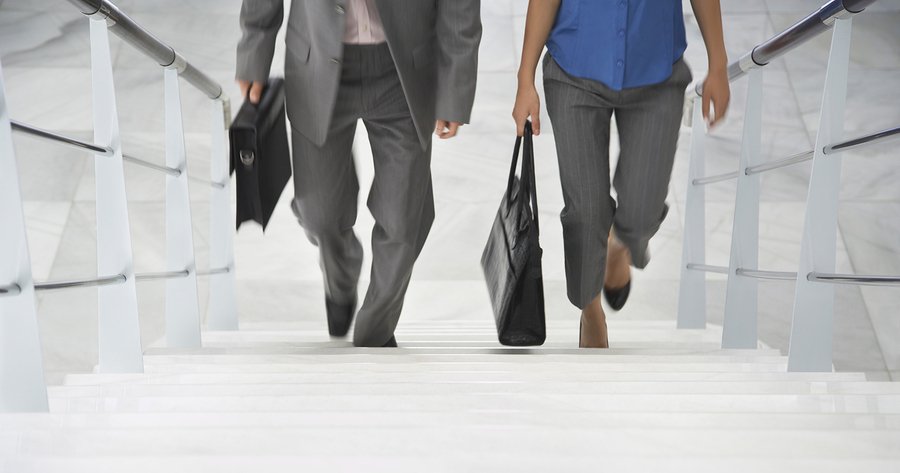 One of the most common excuses made for not exercising regularly is lack of time. But what if you could work out during your day at the office or immediately before…or after? Wouldn’t that make it easier to have exercise become an important–and enjoyable–part of your routine? And what if there were added incentives from your employer? Would that provide an even greater motivation? In fact, new research suggests that by adding a few appealing motivational factors, companies can entice many more employees to join their walking groups.

The study, which was conducted through Independence Blue Cross Insurance in Pennsylvania, found that the use of promotions and rewards can greatly increase involvement in workplace wellness programs.1 Smith-McLallen, Aaron; et al. “Comparative Effectiveness of Two Walking Interventions on Participation, Step Counts, and Health.” American Journal of Health Promotion. 24 June 2016. Accessed 11 July 2016. http://ahp.sagepub.com/content/early/2016/06/24/0890117116658012 The subjects were 474 employees at several businesses taking part in a fitness-oriented plan created by the insurance company. There were 13 groupings of employees based at six different workplaces, with an age range spanning from 19 to 77.

All of these participants were randomly placed in either a standard walking program or an “enhanced” program. The standard program entailed providing volunteers with pedometers to use for keeping count of their daily steps and access to a website to input and track that data weekly. In addition, promotional flyers and posters were dispersed around the office and management was given reference materials aimed at boosting employee involvement. Those in the enhanced wellness program received the same preparation along with coaching, feedback, competitive challenges, monthly workshops on wellness themes, and various rewards to recognize employee participation.

The trial lasted for a period of nine months. Two weeks prior to the start, every subject received a physical examination and completed questionnaires focused on their general health, stress levels, and mood. The physicals and surveys were repeated again at the three, six, and nine-month marks of the program. As the scientists analyzed the data, they found that involvement in either version of the program was healthy, but the program with incentives was more beneficial overall.

Participants in both the standard and enhanced groups were shown to have a substantial increase in their daily number of steps throughout the first 10 weeks of the program. However, at that point the differences began to appear between the groups. Beyond the 10-week mark, the number of steps taken started dropping off in those involved in the standard program. By the end of the nine months, those who took part in the enhanced version had an average total of 726 more steps each day and much more frequently met the goal number of at least 10,000 daily steps versus their peers in the standard program.

Among male volunteers in both programs, those who increased their steps by 1,000 a day or more compared to their rate at the start shed 3.8 pounds on average. The women who achieved the same 1,000-step increase were slightly less successful, but still reached an average loss of 2.1 pounds. And in both sexes, this greater daily step count was associated with reports of improvement in energy levels, better moods, and an overall healthier feeling.

While it might be helpful for human resource managers to understand which aspects of the incentives might have been most effective, the study was not designed to provide that information. But quite honestly, that is not the main point here. Any type of incentive that can get employees interested in exercising and maybe even joining together to work out is a great success. From a business point of view, you have workers with a higher level of energy and good mood coming in every day, not to mention that if they are keeping fit, they will also be less likely to get sick. A 2010 study at Appalachian State University in Boone, North Carolina found that taking a moderately-paced walk for 30 to 45 minutes daily increases immunity to the common cold.2 Nieman, David C.; et al. “Upper respiratory tract infection is reduced in physically fit and active adults.” British Journal of Sports Medicine. 1 November 2010. Accessed 12 July 2016. http://bjsm.bmj.com/content/early/2010/09/30/bjsm.2010.077875.abstract?sid=fe62a8c5-430b-4506-b854-20b62e8a5e9e

So as an employee, take advantage of any incentive program your company offers. But whether you get some sort of reward or not, find a way to motivate yourself. Learn new things about health and wellness, or even just make new friends who are also interested in becoming active, and you will get a lot out of it. The benefits of daily exercise to your mental and physical health are well worth the small time commitment.