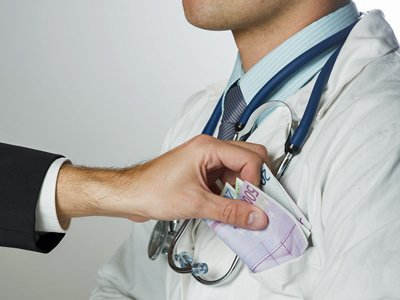 It’s no secret that many physicians accept “bribes” from drug companies in return for prescribing certain pharmaceutical products and medical devices. A few years back, we wrote that “pharmaceutical corruption drives companies to lavish gifts, lunches, research grants, samples, discounts, contributions, club memberships, and more to physicians in order to sway them to prescribe their products and speak on their behalf. Twenty-five percent of all physicians accept cash gifts from drug companies and 75 percent routinely accept in-kind gifts for meals, entertainment, and the like.” According to a 2007 study, it’s actually a full 83% of physicians who report having accepted gifts. The in-kind gifts can include such goodies as all-expense-paid trips to exotic destinations and educational benefits. Meanwhile, teaching hospitals routinely accept large endowments for “sponsored research.”

In that same article, we mentioned the then-pending “Sunshine Act,” a provision of the 2010 Affordable Care Act, intended to create transparency so the public would have access to the nitty-gritty facts about physician payoffs, including which doctors and hospitals took payoffs in excess of $10, and in what amounts. That Act is now in place and the first report just hit the presses.

One striking fact to emerge from the report is that the amount of money drug companies and medical device manufacturers have been paying to health care providers to snag their allegiance is almost unthinkable. In the five-month period from August through December of last year alone, pharmaceutical companies paid at least $3.5 billion to physicians and teaching hospitals in the United States.1 Terhune, Chad. And Levey, Noam N. “Government reveals $3.5 billion in industry ties to doctors, hospitals.” 30 September 2014. LA Times. 30 September 2014. http://www.latimes.com/business/healthcare/la-fi-physician-payments-sunshine-20140930-story.html That’s more than the annual gross national product of Fiji and Bhutan combined.2 http://www.studentsoftheworld.info/infopays/rank/PNB2.html And remember, we’re talking about less than half a year’s worth of payouts. If the bribery remained at the same level for the entire year, the amount expended would exceed the entire GDP of countries like Afghanistan, Nepal, or Paraguay.

To make the extent of the problem even clearer, note that the report counts 4.4 million payments made in the five-month period covered. Those payments went out to 546,000 physicians and 1,360 teaching hospitals. Some doctors made in excess of half a million just in sponsored speaking fees. As shocking as the figures are, though, they probably don’t show the full extent of pharmaceutical payouts, as they no doubt exclude questionable payouts that don’t require disclosure, such as payments to support continuing education for doctors. You can bet that there’s a huge chunk of cash streaming into the non-disclosure categories, and that’s especially true because the pharmaceutical companies knew that their payout records were about to go public with the Sunshine Act, and not being stupid, they most likely redirected funds.

The problem, of course, is that it’s hard for physicians not to have loyalty, or at least a sense of obligation, to whoever pays their bill, and that affects patient safety. Studies have shown that doctors tend to prescribe more expensive and potentially inappropriate drugs or devices when they have financial relationships with manufacturers.3 Thomas, Katie et al. “Detailing Financial Links of Doctors and Drug Makers.” 30 September 2014. The New York Times.” 2 October 2014. http://www.nytimes.com/2014/10/01/business/Database-of-payments-to-doctors-by-drug-and-medical-device-makers.html

As Dr. Michael Carome, Director of Public Citizen’s Health Research Group, said, “When you look at why do drug companies and device companies make gifts and offer consulting payments and honoraria to physicians, the main goal is to influence prescribing practices. The interest of those companies is to improve their financial bottom line, and not necessarily represent the best interest of patients.”

Although the Sunshine Act is supposed to lead to increased transparency so that medical practitioners think twice before accepting goodies from drug company representatives, the current level of revelation is actually more akin to shades of gray. The government website that houses all the juicy data is virtually incomprehensible and unusable.4 http://www.cms.gov/OpenPayments/Explore-the-Data/Dataset-Downloads.html Naïve users who visit the site certainly will be discouraged by the oblique instructions. If they manage to figure out how to download data, they’ll be warned that the file size of the data is so large that it might cause system instability.

And then there’s the issue of missing data. It turns out that almost half of the reported payouts (40%) include no associated physician name. That’s in spite of the fact that the release of data is one year late in coming.5 Loftus, Peter. “Doctors Net Billions from Drug Firms.” 30 September 2014. Wall Street Journal. 1 October 2014. http://online.wsj.com/articles/u-s-agency-reveals-drug-makers-payments-to-doctors-1412100323?tesla=y&mg=reno64-wsj&url=http://online.wsj.com/article/SB12430173822434973597404580186061936677820.html The people at Medicaid and Medicare Services who compile the data for the database say they’re still trying to confirm accuracy before letting the names go public. And don’t forget about the 200,000 records that are not included in the reporting because they’re under dispute or somehow exempt. (Payments related to proprietary research are still being withheld, for instance. Also, payments made to research new products or even to find new uses for old products don’t have to be reported for four years.) And remember, any payments made prior to August won’t show up.

It also turns out that nurse practitioners (NPs) and physician’s assistants (PAs) don’t need to report gifts or cash they’ve received.6 Ornstein, Charles. “Database Flaws Cloud Sunshine on Industry Payments to Doctors.” 30 September 2014. NPR Shots. 2 October 2014. http://www.npr.org/blogs/health/2014/09/30/352725703/database-flaws-cloud-sunshine-on-industry-payments-to-doctors Given that at least 53% of primary care now is provided by NPs or PAs instead of by physicians, the omission leaves out a huge chunk of the medical community-especially those who may directly impact your healthcare.7 Hing, Esther and Hsiao, Chun-Ju. “State Variability in Supply of Office-Based Primary Care Providers: United States, 2012.” Number 151, May 2014. CDC. 2 October 2014. http://www.cdc.gov/nchs/data/databriefs/db151.htm

Supposedly, next year’s report will correct these omissions, but that’s a full year down the IV tube. In the meantime, if your doctor is taking handouts from drug companies, there’s a good chance you won’t be able to find out about it from the government website. The good news is that NPR has a website8 http://www.propublica.org/ that’s much easier to search, and while not quite as comprehensive as the government website intends to be, it nevertheless contains eye-opening and useful data about the relationship between drug companies and individual doctors nationwide.