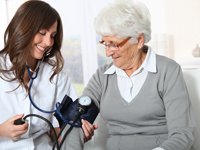 In the US, it’s almost as common to have high-blood pressure as it is to have in-laws. More than one in every three adults has been diagnosed with hypertension, and another third have what’s known as prehypertension–or blood pressure that runs high-ish, although it isn’t yet in the red zone.1 Szabo, Liz. “Advice would put fewer Americans on blood pressure meds.” 18 December 2013. USA Today. 19 December 2013. http://www.usatoday.com/story/news/nation/2013/12/18/new-guidelines-on-blood-pressure/4077085/ If you fall into either of these categories–hypertensive or pre-hypertensive–chances are good that you’ve been given a prescription for at least one medication to lower your numbers.

Now, though, the recommendations for hypertension treatment have been questioned by a committee of scientists who just completed a five-year study of the guidelines currently in use. The committee just published its findings in the Journal of the American Medical Association, and they suggest some significant changes. In essence, the new guidelines would change the threshold for treating high-blood pressure, particularly for those over the age of 60.

Currently, the accepted recommendations say that any reading above 140/90 constitutes hypertension in adults. The recommended ideal remains 120/80, with anything up to 140/90 considered ‘pre-hypertension.’ The medical community has, in the past, interpreted these figures to mean that if your systolic pressure (which refers to the top number and represents the pressure when your heart beats and blood is forcefully expelled from your heart) is above 140 and/or your diastolic pressure (the lower number–the pressure between heartbeats) is above 90, you should take blood pressure medication to force your numbers below those markers. Since a single prescription often doesn’t lower the number enough to go below that recommended threshold, many people take multiple drugs (a tough call for those pursuing natural heart health), and they take high enough dosages to nudge the numbers down.

The new guidelines, in contrast, say that if you’re over the age of 60, you only need medication if your blood pressure tops 150/90. And, if it is higher than that figure, you only need enough medication to bring both numbers below that threshold.

The study points to randomized controlled trials that show reducing blood pressure below 150/90 in this age group reduces stroke, heart failure, and heart disease. But according to research director Paul James, head of the Medicine School at the University of Iowa, “We really couldn’t see additional health benefits by driving blood pressure lower than 150 in people over 60 years of age. It was very clear that 150 was the best number.”

“We have this notion that if we can get blood pressure to normal, we will have the most health benefits,” he said. “That’s not necessarily true.”

What does this mean? It appears that there’s no evidence to support the value of lowering the systolic (again, the top value) in the blood pressure reading to below 140 in younger adults. The value of the recommendation to keep the systolic pressure below 140 seems to be based on opinion, according to the report, rather than on scientific facts showing that 140 is indeed the magic number. In other words, doctors should continue to prescribe medication for those under the age of 60 if they have readings above 140, despite lack of solid evidence that it will help.3 Willingham, Val. “So you have high blood pressure? New guidelines suggest maybe you don’t.” 18 December 2013. CNN Health. 20 December 2013. http://www.cnn.com/2013/12/18/health/new-guidelines-high-blood-pressure

The report also modifies advice for those under age 60 who have diabetes or kidney disease. Previously, the standard advice was to medicate if blood pressure went above 130 in this subgroup, but the new standards call for these patients to receive the same treatment as a healthy population. In other words, they only get medicated if their readings exceed the 140/90 threshold.

The report essentially says that at a certain point, the problems incurred by the medications outweigh the benefits they confer. For instance, the authors note that, “We were particularly concerned about medication side effects in the elderly population like light-headedness and dizziness, which increases the risk of falling and broken bones.” Given that hypertensive medicines net so much cash for their manufacturers–$26 billion in 2009 (worldwide) — it’s not surprising that there’s already been backlash to the report.4 “Hypertension drug market to decline by $3 billion in 2019.” 29 September 2010. News/Medical. 20 December 2013.  http://www.news-medical.net/news/20100929/Hypertension-drug-market-to-decline-by-243-billion-in-2019-Decision-Resources.aspx Among the critics is the American Heart Association, which says that the report is based on too many short-term studies, whereas the effects of high-blood pressure tend to show up over the long-term.

In any event, Jon Barron has often spoken about the side effects of blood pressure medications. Depending on the class of drugs prescribed, the effects can range from merely annoying–like depression, sweating, itching, and sexual dysfunction–to life-threatening, including increased risk of stroke and cancer. Your best bet to combat high blood pressure is to change your lifestyle, clean up your diet, increase your fitness and exercise routines, and reduce stress. There are also some natural formulations that incorporate things like hawthorn berry, garlic, grape seed extract, and natural ACE (angiotensin converting enzyme) inhibitors that might help. And, of course, cardiovascular exercise can certainly help at any age. For more insight, listen to Jon Barron’s podcast on the subject.