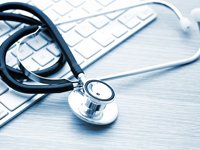 There are plenty of reasons to fear going to the doctor: a scary diagnosis, high bills, endless waits, contagious patients in the waiting room. One not-so-obvious thing to add to the list is the fact that the sanitary-looking facility might harbor a plethora of germs in unexpected places. For instance, according to a new report, stethoscopes often play host to infectious agents, including MRSA–a form of staph infection that can kill you.

The report, just published in The Mayo Clinic Proceedings, reveals that at a major teaching hospital in Geneva, Switzerland, stethoscopes carried more MRSA and other germs than the palms of the doctor’s hands.1 Longtin, Yves, MD, et al. “Contamination of Stethoscopes and Physician’s Hands After an Examination.” March 2014. Mayo Clinic Proceedings. 1 March 2014. http://www.mayoclinicproceedings.org/article/S0025-6196%2813%2901084-7/fulltext The study focused on 83 patients and the doctors treating them. In the case of 12 of the patients, there was no significant contamination after the exam, but the other 71 patients did shed bacteria. After these patients were examined, the researchers took samples from four regions of the attending doctor’s hands as well as from the stethoscope diaphragm and tube.

Although medical schools ostensibly urge students to both wash their hands and wipe off stethoscopes between patients, the study reports that whereas many do the former (more on that in a bit), few do the latter. “Most surveys,” it says, “… reveal that 70% to 90% of the physicians do not disinfect systematically their stethoscope after every patient contact.” In fact, the report asserts that the typical stethoscope gets disinfected only once a month.2 Schimelpfening, Nancy. “Stethoscopes Hold More Germs Than Doctor’s Hands, Study Says.” 27 February 2014.  Liberty Voice. 1 March 2014. http://guardianlv.com/2014/02/stethoscopes-hold-more-germs-than-doctors-hands-study-says/ You might want to remember that fact the next time the doctor approaches you with a stethoscope, particularly if you’re in a hospital setting. The experts suggest that you shouldn’t be afraid to ask the doctor to give the stethoscope a wipe-down before using it on you.

“We encourage them to douse their stethoscopes between patients, but some days when you’re moving quickly between patients, you sometimes can forget,” said Dr. Daniel Spogen of the University of Nevada School of Medicine.3 Thompson, Dennis. “Germ-Laden Stethoscopes May Spread Nasty Bacteria.” 27 February 2014. WebMD. 1 March 2014. http://www.webmd.com/news/20140227/doctors-germ-laden-stethoscope-may-spread-nasty-bacteria

The problem is, experts say, that there are no standards in place for stethoscope disinfection. Also, there aren’t any studies linking equipment contamination to the spread of MRSA or other infections. According to Dr. Gonzolo Bearman, an epidemiologist at Virginia Commonwealth University quoted by NPR, “One of the major knowledge gaps of infection control is the degree to which the inanimate environment … actually drives the hospital infection process…[But] common sense should dictate that reusable equipment should be wiped down after each use.”4 Boon, Linda. “Stethoscopes Do as Much Dirty Work as Hands in Spreading Germs.”27 February 2014. NPR. 4 March 2014. http://www.npr.org/blogs/health/2014/02/27/283439909/stethoscopes-do-as-much-dirty-work-as-hands-in-spreading-germs

If physicians would only make some effort to disinfect the stethoscopes they use, it would be an improvement over completely bypassing that step, but the fact remains that getting rid of MRSA contamination isn’t simply a matter of a quick “douse.” The correct MRSA cleaning protocol suggests that gloves should be worn, the right disinfecting solution needs to be applied and left on the surface for at least a minute, and then all cleaning cloths should be discarded.5 “Staphylococcus aureus including MRSA Cleaning and Disinfection Protocol.” Virox Technologies. 4 March 2014. http://www.mga.edu/risk-management/docs/environmental-services/MRSA-Staph_Infection_Cleaning_Protocol.pdf It’s a bit of a fussy procedure for sleep-deprived doctors who have patients backed up, particularly in emergency situations–a procedure that will likely be skipped from time to time at best, even with reminders. Plus, the experts say they aren’t yet certain which disinfecting protocol works best with stethoscopes. Some suggest that patients with MRSA should be assigned their own stethoscopes. It also makes sense to use disposable covers for the stethoscope–and these are cheap, easy to find, and readily available.

Of course, a clean stethoscope will do you little good if your doctor touches you with dirty hands. Although there are existing guidelines mandating that doctors wash between patients, and in fact, physicians get deluged with literature reminding them to do so, studies show that only about 40 percent of doctors in US hospitals consistently comply.6 O’Connor, Anahad. “Getting Doctors to Wash Their Hands.” 1 September 2011. New York Times. 4 March 2014. http://well.blogs.nytimes.com/2011/09/01/getting-doctors-to-wash-their-hands Considering that research confirms that increasing hand hygiene lowers infection rates, it certainly makes sense to also remind your doctor to wash her hands or put on a pair of gloves like most dentists now do before touching you. Of course, she might suggest you need an antipsychotic for obsessive-compulsive disorder, but at least you’ll be protected from any bacterial agents she may be carrying.