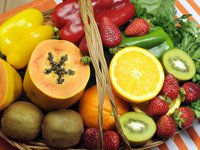 Vitamin C is probably best known to the public as a healthy nutrient found in citrus fruits that might have some merit as a natural way to prevent the common cold.  Of course, it is also a powerful antioxidant that can stop the damage caused by free radicals.  And now, there may be another advantage to add to vitamin C’s list.  New research has found that vitamin C just might help protect us from a deadly form of stroke.

The study, which took place at Pontchaillou University Hospital in Rennes, France, discovered that people with depleted levels of vitamin C appear to have a higher risk for developing a hemorrhagic stroke, the kind of stroke caused by bleeding in the brain.1 Reinberg, Steven. “Can Vitamin C Ward Off Stroke?” WebMD. 14 February 2014. Accessed 26 February 2014. http://www.webmd.com/stroke/news/20140214/can-vitamin-c-ward-off-stroke   The subjects were 130 individuals, half of whom had experienced a hemorrhagic stroke and half of whom were healthy. Blood tests were performed to measure each volunteer’s level of vitamin C.  The vitamin C levels of those who had suffered from a hemorrhagic stroke were found to be substantially lower overall than in those who had not had a stroke.

Of the total number of participants, 41 percent were determined to have vitamin C levels in the normal range, 45 percent had depleted levels, and 14 percent were deficient in vitamin C. The recommended daily allowance (RDA) of vitamin C is 90 mg per day for men and 75 mg per day for women.  The healthy subjects were much more likely to have sufficient levels of vitamin C, while the subjects who had brain bleeds were much more likely to have depleted or deficient levels of the vitamin.  In addition, the researchers found that those with lower levels of vitamin C generally experienced longer hospitalizations after their stroke than did their counterparts with higher levels of vitamin C.  However, they did not find an association between depleted vitamin C levels and an increased risk of mortality.

These findings were obviously based on a very small experiment using a limited population sampling, so further research is necessary to back up the evidence.  The study was also not designed to prove cause and effect.  But it is certainly an intriguing possibility that vitamin C could play such an important role in protecting the brain.  Hemorrhagic strokes are much less common than ischemic strokes, which are caused by clots that block the flow of blood to the brain, and they account for only about 13 percent of strokes according to the American Heart Association.  However, that still translates to more than 100,000 hemorrhagic strokes per year in the United States alone, and hemorrhagic strokes typically have a higher mortality rate.

Vitamin C is known to help lower blood pressure levels and help the body produce collagen, which is important to maintain healthy blood vessels.  High blood pressure is one of the major risk factors for hemorrhagic stroke, along with heavy alcohol consumption and being overweight. A deficiency in vitamin C can also cause scurvy, which, even though it may make you think of pirates, is actually a very serious disease that can decrease the body’s ability to fight infections.  Symptoms of vitamin C deficiency include gingivitis and bleeding gums, bruising, slow wound healing, and nosebleeds,2 “Vitamin C (Ascorbic acid).” University of Maryland Medical Center. 20 June 2013. Accessed 28 Februrary 2014. http://umm.edu/health/medical/altmed/supplement/vitamin-c-ascorbic-acid all of which involve blood vessels.  Therefore, it doesn’t seem to be too far a reach to suggest that low levels of vitamin C could cause damage to delicate blood vessels in the brain and produce bleeding there as well.

Therefore, it really couldn’t hurt to stock up on good sources of vitamin C, especially since it is found in a wide variety of fruits and vegetables that offer lots of nutrients.  Some of the most vitamin C-rich options are peppers, guavas, kale, kiwi, broccoli, strawberries, rose hips, oranges–and camu camu, the richest source of all. Eating a few servings of produce containing copious amounts of vitamin C will not only serve to keep your levels in the healthy range, but may also help you lose a little weight if you are substituting them for junk food as a snack or as a side dish in lieu of French fries.

And keep in mind, we’ve only discussed keeping your vitamin C levels up to RDI levels. There is a whole school of thought, first promoted by Linus Pauling, that mega-dosing with vitamin C can produce even more profound results.3 Hilary Roberts. “Vitamin C, Linus Pauling was right all along. A doctor’s opinion.” 17 August 2004. Medical News Today. (Accessed 28 Feb 2014.) http://www.medicalnewstoday.com/releases/12154.php