TV Shows That Make You Fat 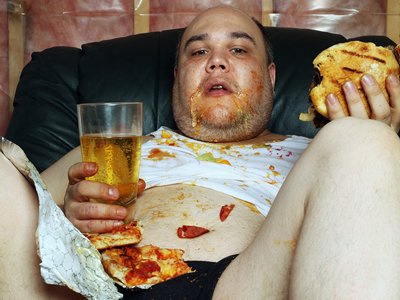 Do you prefer action flicks and fast-paced, exciting TV shows? Lots of people do, judging by the box office success of such movies as Captain America and the popularity of television dramas like 24. But you might want to rethink some of your viewing choices if you don’t want to pack on extra pounds. According to new research, watching action-oriented films and programs is linked with a greater consumption of snack foods.

The study, which took place at Cornell University in Ithaca, New York, found that people tend to eat a significantly higher quantity of food if they are watching something fast-paced and exciting than they do while watching something with no action scenes.1 Preidt, Robert. “Action-Packed TV a Threat to Your Waistline?” WebMD. 1 September 2014. Accessed 10 September 2014. http://www.webmd.com/diet/news/20140901/action-packed-tv-a-threat-to-your-waistline The subjects were 94 male and female undergraduate students at the university. They were seated in front of a television for 20 minutes of viewing time and provided with a range of snacks that included cookies, M&M chocolate candies, grapes, and carrots.

Incredibly, the group who got the full experience of The Island with sound ate a whopping 98 percent more of the food–just about twice as much!–as those shown The Charlie Rose Show. And that was after only 20 minutes of viewing time. Imagine the quantities that might be consumed during a full-length two-hour movie! Hearing the associated musical crescendos, anxious conversations, and other related noises apparently adds to the effect, as the action movie viewers with the volume on were by far the biggest snack consumers. However, even without sound, the group watching The Island still managed to eat 36 percent more than the talk show viewers.

While it’s not clear exactly why we tend to shovel a lot more food into our mouths as we watch an action movie than we do with a show that is more slow paced, the researchers theorized that it may have to do with the rapid fire changes in scenes and nonstop rush of activity that keep us glued to the screen. This may lead to some level of detachment and distraction from what is going on around us, including our eating. Then again, it could be something as simple as watching stressful things makes you feel stressed, which raises cortisol levels, and studies have shown that cortisol increases the desire for sugary, fatty foods.2 Roberts CJ, Campbell IC, Troop N. “Increases in weight during chronic stress are partially associated with a switch in food choice towards increased carbohydrate and saturated fat intake.” Eur Eat Disord Rev. 2014 Jan;22(1):77-82. http://www.ncbi.nlm.nih.gov/pubmed/24123563

This is hardly the first evidence that watching TV helps us pile on the pounds, but it is more specific as to what types of programs are the worst for our waistlines. And many of the earlier studies focused on children’s viewing habits, such as a 2014 trial at Dartmouth College in Hanover, New Hampshire, which determined that kids who have a television in their bedrooms are likely to be heavier.3 Gilbert-Diamond, Diane; et al. “Association of a Television in the Bedroom With Increased Adiposity Gain in a Nationally Representative Sample of Children and Adolescents.” JAMA Pediatrics. May 2014. Accessed 12 September 2014. http://archpedi.jamanetwork.com/article.aspx?articleid=1838347&resultClick=3. On the other hand, it should be noted that the current research only used a small population sample and the volunteers were likely not very diverse in age as they were all undergraduates. However, the results were convincing enough that it might be worth your while to take a pass on the action fare and give a good drama or romantic comedy a try instead. If that is simply not your taste and you need that adrenaline rush when you watch, try to adjust your eating habits while watching action shows to prevent overindulging on junk food.

Then again, you could simply self-impose a ban on snacking during your television time or, if that’s not realistic, carefully choose what foods you make available to yourself when watching. Instead of going back and forth to the fridge to take whatever strikes your fancy, prepare your snacks ahead of time so there’s no temptation to add additional items or consider more fattening options. Since the findings showed that people tend to eat more of every item offered during an action movie, cut up veggies or prepare a big fruit bowl and then indulge to your racing heart’s content.