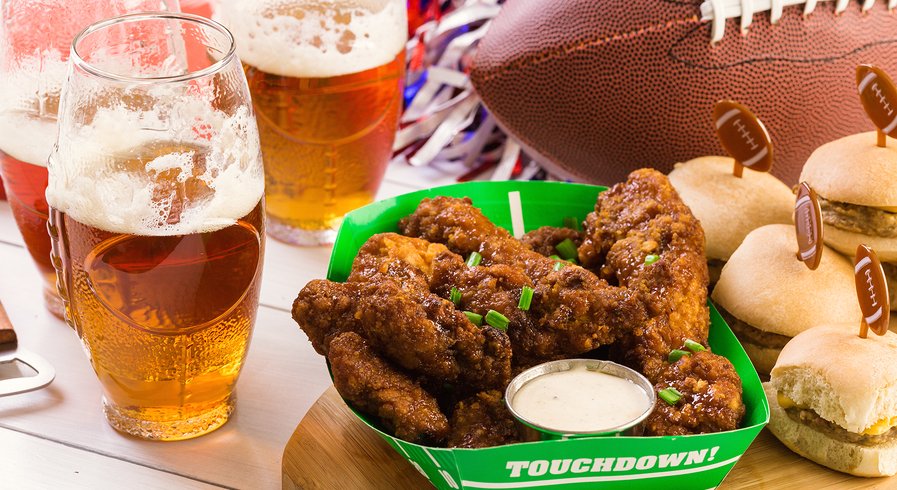 The biggest sporting event in the United States is rapidly approaching. Even if your team didn’t make it to the Super Bowl—and let’s face it, even if you don’t know a tight end from a nose tackle, you are probably doing something that involves someone you know watching the big game. And for everyone from the most avid fans to those just interested in checking out the commercials and half-time show, it also typically means hours on end of nonstop eating and drinking.

A 2014 study at the Cornell University Food and Brand Lab in Ithaca, New York, found that household food purchases have the highest number calories per serving during the week of the Super Bowl.1 Pope, Lizzy; et al. “New Year’s Res-Illusions: Food Shopping in the New Year Competes with Healthy Intentions.” PLoS One. 16 December 2014. Accessed 18 January 2017. http://journals.plos.org/plosone/article/file?id=10.1371/journal.pone.0110561&type=printable. Yes, that’s correct, we buy more for Super Bowl consumption than for Thanksgiving, coming in at a tally of…wait for it…more than 6,000 calories per serving.

But this doesn’t have to mean diet disaster for you. You can enjoy your Super Bowl party without undoing all the healthiness of the rest of your routine. Just plan ahead with a few simple do’s and don’ts.

1.  Do Keep Up Your Exercise Routine

The Super Bowl may be a busy day, especially if you’re hosting a party. But make sure you find time to get in your regular workout, or even a little extra. Chances are that even if you’re really good about not overeating for four hours straight, you will be consuming more calories than usual during the game. But it won’t be nearly as damaging if you can offset those calories with a healthy expenditure of calories earlier in the day.

Eat your typical, nutritious meals earlier in the day. If you try to cut calories to save them all for the evening, you’ll be starving and less likely to give a lot of thought to what you’re choosing. You’re much better off arriving after having a healthy snack that leaves you somewhat satiated and therefore able to avoid diving into the wings and pizza as kickoff begins.

3.  Do Prepare a Few Dishes Yourself

Whether you like to watch the Super Bowl in your own home or go to someone else’s party every year, you have more control over what you’re eating if you cook a couple of items. This ensures you will have at least one or two things you know are healthy and you really like so you don’t feel totally left out of all the indulgences. A few good options are vegetables with hummus, guacamole with whole-grain crackers, and platters of cut fruit.

4.  Don’t Stay in the Grazing Area

If food is left out buffet style, take the smallest plate you can find and put a taste of several items on it. In fact, if you know it’s going to be a buffet with paper plates, bring a couple of small paper plates with you—just to be sure. After all, a 2012 study at the Cornell University Food and Brand Lab in Ithaca, New York showed that replacing larger plates with smaller ones reduces your chance of overserving yourself.2 Van Ittersum, Koert and Wansink, Brian. “Plate Size and Color Suggestibility: The Delboeuf Illusion’s Bias on Serving and Eating Behavior.” Journal of Consumer Research. August 2012. Accessed 19 January 2017. http://www.jstor.org/stable/10.1086/662615#fndtn-full_text_tab_contents.
With a small plate, if you decide to indulge in chicken wings, it will only be a couple, or if you go for the pizza, it will have to be a small piece, or even a half slice. In any case, once the smaller plate is full, walk away and choose a seat in the area farthest from the food. If you don’t see it, you may not be nearly so tempted for seconds or thirds. Enjoy the game and conversations with those sitting nearby so the food isn’t your only focus.

Throughout the day of the Super Bowl, make sure you are drinking enough water to stay adequately hydrated. Many of the foods served at these parties are very high in sodium, and alcohol is dehydrating so it pays to have a good amount of water ahead of time. You’ll probably have some beer or another alcoholic beverage during the game, but make sure you stop early and switch back to water, especially if you’re going to be driving.

6. Don’t Eat Like It’s Super Bowl Sunday the Rest of the Week

You’re not going to be doing your healthiest eating during the Super Bowl. Accept that fact and move on. A couple of chicken wings and a half slice of pizza aren’t going to kill you. On the other hand, a plate full of wings and three or four large slices just might. Try to make as many adjustments as you can so you don’t end up with a 4,000-calorie meal, but don’t beat yourself up over one bad night of eating. And don’t take any of the leftovers home with you! Get back on track Monday morning and you’ll quickly recover over the next couple of days.