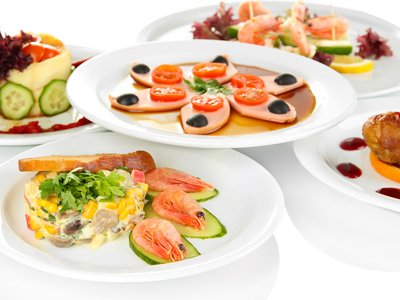 Many people swear by eating smaller, more frequent meals throughout the day, rather than three squares, as a painless, easy weight loss tool. The theory suggests that by consuming five or six mini meals, you will boost your metabolism and stave off the hunger that often causes you to make bad food choices. Ideally, this would result in helping you shed some extra pounds. However, new research analyzed how grazing might affect our ability to lose weight, and it was found to be no different than eating on a more traditional meal schedule…possibly.

The study, which took place at University Hospital Coventry and the University of Warwick in Coventry, United Kingdom, determined that eating small meals every few hours did not have any substantial effect on weight loss and offered absolutely no benefit over eating larger meals twice a day.1 Doheny, Kathleen. “‘Grazing’ versus regular meals: Dieters weigh the evidence.” CBS News. 28 March 2014. Accessed 31 March 2014. http://www.cbsnews.com/news/is-grazing-on-small-meals-better-for-diet-weight-loss-than-standard-meals The subjects were 24 women, with one group in the normal weight range and another group that was obese. Among the women at healthy weights, the average age was 34, while the obese women had an average age of 42.

On one day of the experiment, the participants were provided with two substantial meals to eat, and on the other day of the experiment, they were given five mini meals with the same number of total calories offered both days. The scientists then tested each woman to calculate how many calories were burned and compared the results for each subject at the end of the two days. Regardless of whether the volunteer was at a normal weight or obese, they burned almost exactly the same number of calories over the course of 24 hours having eaten two meals or five.

The researchers collected blood samples from the participants twice on each day of testing. They were analyzing the blood for markers of inflammation such as endotoxins. Endotoxins are found in bacteria in the body, and they can trigger the immune system to produce inflammation. And over time, inflammation can damage the tissues and organs, increasing the risk of many conditions including diabetes and cardiovascular disease. Interestingly, the normal-weight subjects did not have increased levels of endotoxins either day of the trial, but the obese subjects were found to have a greater concentration of endotoxins when they consumed five smaller meals. This would suggest that grazing throughout the day might actually be worse for the body than eating fewer meals.

That being said, all of the findings must be considered preliminary at this point. The results gleaned from such a tiny population sample–and of women only–with evidence collected in just two days isn’t concrete proof of anything. But this does appear to confirm the findings of a 2013 study at the Institute for Clinical and Experimental Medicine in Prague, Czech Republic, which showed that eating two large meals a day for 12 weeks resulted in greater weight loss than did eating the same number of calories spread across six mini meals in subjects with type 2 diabetes.2 http://www.abstractsonline.com/Plan/ViewAbstract.aspx?sKey=5729427a-bf50-4c5b-b77b-59c1b0029843&cKey=efbbe9b6-4c3e-484f-bdc8-129af1de2f02&mKey=%7b89918D6D-3018-4EA9-9D4F-711F98A7AE5D%7d Plus, in the current study, the daily caloric intake was tightly controlled, but when left to their own devices, many people start forgetting about portion size and their “small” frequent meals become larger and larger. This would obviously cause quite a calorie bump and subsequent weight gain eventually.

Perhaps the most important thing to take from this experiment is simply the reminder that what matters most in our attempts to reach or maintain a healthy weight is our overall calorie count. While we are certainly best off getting our daily dose of calories through fresh, low-fat, low-sugar foods, the bottom line is that if we take in the same number of calories that we expend each day, our weight will tend to remain steady, and if we consume fewer calories than we expend, we will tend to lose some weight. So become more mindful of what you are choosing to eat, keep track of the calories you are eating, restrict portion size, and exercise daily to help expend more of those calories. If you are not eating more calories than you are using, you will not be gaining excess weight no matter how many meals you consume.