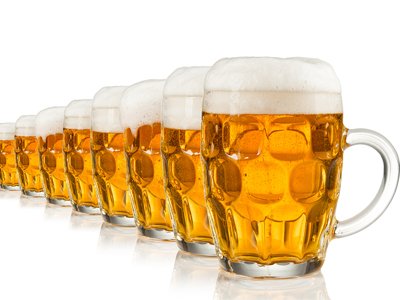 In a still shaky economy, all of us with full-time jobs know we are lucky to be gainfully employed. To make sure we keep those steady paychecks coming, many people are willing to work long hours to impress their bosses and get things accomplished. But while that may make you feel like you have a little more job security, there is a definite downside to taking on extra work. We already know that overwork can lead to heart attacks, stroke, and depression. But new research adds another problem to the list; it tells us that spending more time at work may result in drinking more alcohol afterwards.

The study, which was conducted at the Finnish Institute of Occupational Health in Helsinki, found that individuals who work long hours on a regular basis appear to be more likely to engage in risky drinking behaviors.1 Neighmond, Patti. “Working Longer Hours Can Mean Drinking More.” NPR. 14 January 2015. Accessed 21 January 2015. http://www.npr.org/blogs/health/2015/01/14/377002003/working-longer-hours-can-mean-drinking-more. The subjects were 333,693 men and women residing in 14 different countries. The scientists completed an analysis of 61 various lifestyle studies in which each of these subjects had taken part, focusing on both work habits and alcohol consumption.

By comparing the typical number of hours worked in a week and the quantity of drinks imbibed in an average week, they were able to draw a firm parallel between a heavy workload and heavy drinking. The data showed that the participants who logged more than 48 hours a week at work were 13 percent more likely to drink excessively than were their peers who spent between 35 and 40 hours a week on the job.

What constitutes drinking to excess? That’s where it gets even more interesting. After all, the definition of risky drinking behavior varies in different parts of the world. Since the research took place in Europe, the scientists incorporated their continent’s model, which places the threshold at more than 14 drinks a week for women and more than 21 drinks a week for men. So their findings uncovered a greater chance that those men working at least 48 hours per week were either consuming more than three drinks every night or, if they weren’t drinking nightly, binging on five, six, or even more alcoholic beverages a few times a week.

In the U.S., in contrast, a risky level of drinking is more moderately defined as more than 7 drinks a week for women and more than 14 drinks a week for men. According to the standards here–if the same outcome were to be found among American subjects–the numbers would be considered a sign of a serious problem for many adults. It would be fascinating to see if the results were the same in the U.S. or if the relatively freer attitude about alcohol across Europe is a factor.

However, it seems probable that Americans are not far behind in their drinking habits from their European counterparts. According to 2012 research at the Centers for Disease Control and Prevention in Atlanta, one in six American adults binge drinks more than four times per month.2 “Vital Signs: Binge Drinking Prevalence, Frequency, and Intensity Among Adults–United States, 2010.” Centers for Disease Control and Prevention. 13 January 2012. Accessed 22 January 2015. http://www.cdc.gov/mmwr/preview/mmwrhtml/mm6101a4.htm?s_cid=mm6101a4_w None of this bodes well for the hardworking men and women everywhere who arrive on the job early in the morning and leave late at night. In fact, with a 2014 Gallup poll showing that nearly 40 percent of full-time American employees report logging more than 50 hours a week at work,3 Saad, Lydia. “The ’40-Hour’ Workweek Is Actually Longer–by Seven Hours.” Gallup. 29 August 2014. Accessed 22 January 2015. http://www.gallup.com/poll/175286/hour-workweek-actually-longer-seven-hours.aspx the current study suggests a potentially major problem with alcohol consumption. Is it any wonder that 22% of Americans feel that they sometimes drink too much?4 Saad, Lydia. “Majority in U.S. Drink Alcohol, Averaging Four Drinks a Week.” Gallup. (Accessed 22 Jan 2015.) http://www.gallup.com/poll/156770/Majority-Drink-Alcohol-Averaging-Four-Drinks-Week.aspx

Whether the copious drinking is an outlet for stress relief, a celebration of finally getting out of the office, or some other form of coping, we know that drinking too much takes a heavy toll on health. A 2002 study at the CDC determined that excessive alcohol intake appears to reduce lifespan by approximately 30 years for one in ten people in the U.S. Heavy drinking has been associated with a higher risk of developing liver disease, heart damage, cancer, and stroke. It also harms us emotionally and can destroy the fabric of personal relationships and, ironically, impact performance on the very job that causes the alcohol use in the first place.