Getting Your Meat from a Lab 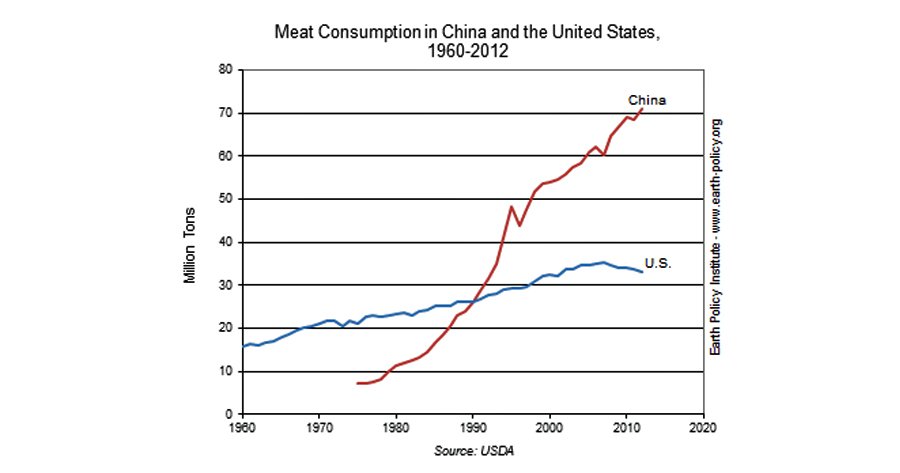 While a diet free of meat or low in consumption of meat is considered a healthier choice, the reality is that most people in the United States still have not taken meat off of our menus–and the rest of the world is working hard to catch up. In fact, Americans’ appetite for meat seems to be increasing. According to the USDA, Americans ate an average of 195.2 pounds of meat annually in 2000, a whopping 57 pounds more than the typical consumption in the 1950s.1 “Profiling Food Consumption in America.” USDA. Accessed 27 March 2016. http://www.usda.gov/factbook/chapter2.pdf Incidentally, meat consumption in China now dwarfs that of the United States–not necessarily per person, but overall. In any case, to address the concerns of the growing demand for meat around the world, a team of scientists has successfully created the first laboratory-produced burgers that taste remarkably similar to traditional burgers.2 Ferdman, Roberto A. “This is the future of meat.” Washington Post. 20 May 2015. Accessed 27 March 2016. http://www.washingtonpost.com/news/wonk/wp/2015/05/20/meet-the-future-of-meat-a-10-lab-grown-hamburger-that-tastes-as-good-as-the-real-thing/

This major breakthrough took place at Maastricht University in the Netherlands, where the researchers have been focused on replicating cow muscle tissue. That’s right, the meat they are producing is not a protein substitute, but made of animal tissue that originated with cells from a cow. Without harming the animal at all, a small sample of muscle tissue is taken from the cow. In the lab, the sample is cut up so that muscle fibers are separated from cells and the individual cells are isolated into a culture in order to start the process of cell multiplication.

These cells form fibers known as myotubes, which grow around gel hubs and eventually become a ring of tissue. Strands develop in the tissue and there may be more than a trillion cells in each. Eventually the strands are placed together in layers and made into a patty of meat that resembles and tastes like a hamburger. The scientists were able to create the first one of its kind in 2013, and the five-ounce product was difficult to distinguish from those sold in supermarkets.

One major difference, however, was the price at that time. In those early days, a lab-grown burger cost $350,000 to produce–just a little too pricey for most of us for dinner. But as the process was refined, the cost has been reduced significantly since then. In fact, the team believes they are close to realizing their goal of producing a burger that could sell for less than $10, making it a much more realistic purchase for consumers.

Why would anyone want to eat a lab-created meat product rather than the real thing? One important consideration is protecting animals from not only slaughter, but also the inhumane treatment many receive when they are looked upon as sides of beef. They are kept in overcrowded cages or pens and are often genetically altered to increase their size unnaturally. If all we need to create hamburgers is a little sampling of their tissue, none of these terrible conditions would exist.

In addition, the desire to reduce the price of meat and increase profit margins has led to unsafe practices including injecting the animals with growth hormones and antibiotics in order to make them grow faster and prevent disease in their filthy quarters. This is not only bad for the livestock, but also bad for us when we eat their meat. We are consuming the antibiotic-laden tissues, which destroy the beneficial bacterial in our bodies. While these practices may help bring down the cost of meat in the supermarket, which makes it really appealing to lots of us looking to offer our families a source of protein at a reasonable price, the potential health effects are scary. Consuming hormone-laden meat has been associated in a 2011 study at the Harvard School of Public Health in Boston with an increased risk of developing type 2 diabetes3 Pan, A.; et al. “Red meat consumption and risk of type 2 diabetes: 3 cohorts of US adults and an updated meta-analysis.” American Journal of Clinical Nutrition. October 2011. Accessed 28 March 2016. http://www.ncbi.nlm.nih.gov/pubmed/21831992 and a 2007 study at the National Cancer Institute with a greater chance of a cancer diagnosis.4 Cross, Amanda J.; et al. “A Prospective Study of Red Processed Meat Intake in Relation to Cancer Risk.” PLoS Medicine. 11 December 2007. Accessed 28 March 2016. http://journals.plos.org/plosmedicine/article?id=10.1371/journal.pmed.0040325

Then, of course, there are the environmental factors. Cattle eat large amounts of food that needs to be grown somewhere. In fact, about 70% of Amazon deforestation is the result of cattle farming. (Incidentally, the rainforest is disappearing at a rate equivalent to six Rhode Islands a year.) In addition, animal waste is toxic and often ends up leaching into water supplies. Livestock, along with fossil fuels, are the two main sources of methane emissions, which are 70-100 times more potent than carbon dioxide when it comes to global climate change.

Of course, according to many experts, hamburgers are not exactly the healthiest option for a meal anyway, and manmade hamburger can help here as well. Since the cultures are only creating muscle protein, the entire fat content of the burger is added for flavor and texture. This allows for precise control of how much fat–and exactly what kind of fat the burgers contain. In any case, at least until the synthetic burgers come down in price, you’d be better off eliminating or at least cutting way back on your meat consumption and only choosing organic, hormone-free, grass fed meats when you do.