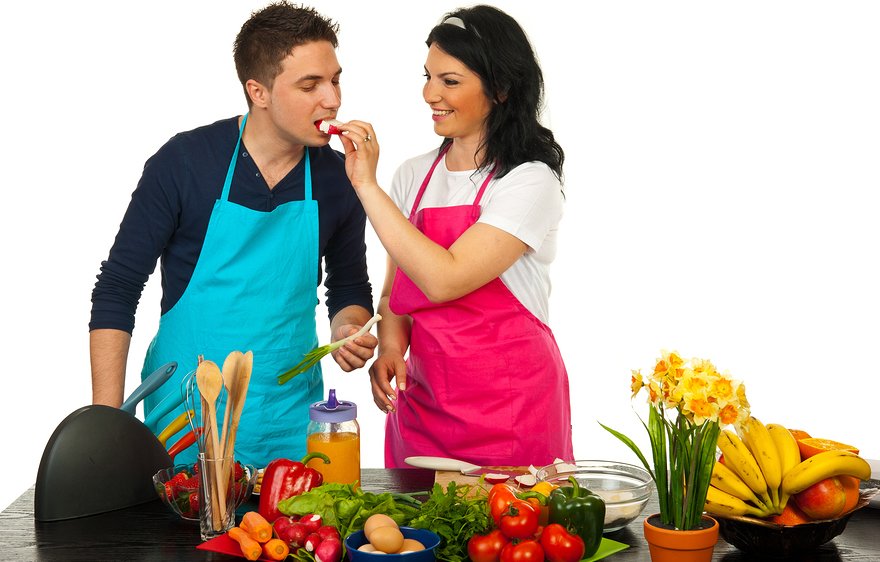 There are lots of qualities you may consider when choosing a love interest. Kindness, generosity, a great sense of humor, solid values…the list goes on and on. You might not, however, give too much thought to their eating habits. But perhaps you should start giving more weight to the types of foods a potential mate prefers to eat, for the sake of your own health. According to new research, couples begin to develop similar tastes in food over time, so you don’t necessarily want to choose a long-term partner whose idea of fine dining is a bacon double cheeseburger and fries.

The study, which was conducted at the University of Wroclaw in Poland, found that romantically involved partners begin to share similar food preferences as their relationship continues over the years.1 Groyecka, Agata; et al. “Similarities in smell and taste preferences in couples increase with relationship duration.” Appetite. 31 August 2017. Accessed 26 September 2017. http://www.sciencedirect.com/science/article/pii/S0195666317307948#bib43. These results were based on an analysis of 100 couples between the ages of 18 and 68 who had been together for some length of time ranging from three months to 45 years.

Each subject’s taste and smell preferences were assessed through a series of tests. They were asked to sniff dozens of scents, including peach, cinnamon, lavender, tomato puree, white chocolate, smoked meat, butter, coffee, and onion, then asked to rate each for its appeal. Flavors such as sweet, salty, bitter, sour, and umami were also lightly sprayed directly onto each participant’s tongue to be rated for preference.

A comparison of the ratings outcomes showed that the longer two people had been a couple, the greater the likelihood that they favored the same tastes and smells. But surprisingly, whether their relationship was happy or unsatisfactory did not have any bearing on sharing similar tastes—that completely hinged on duration.

Why would a lengthy relationship influence both of the individuals to begin liking more of the same flavors and foods? The answer is not clear from the design of this research, but the investigators do have some theories. In longer relationships, people tend to live together or, at the very least, spend quite a bit of time with one another. That would result in shared meals, probably several times a day. Adjustments may be made to cooking to satisfy both people’s palates, possibly causing a picky eater to mildly experiment and find new foods they like or someone who prefers bland food to meet their significant other with the spicy preferences somewhere in the middle. Over time, they each become accustomed to these changes and start to slowly shift their taste in food.

So, the environment in which you are eating likely plays a part, but it’s possible that nature has some effect on this as well. A 2015 study at the University of Alaska Fairbanks found that there is a distinct evolutionary purpose to the evolution of smell and our identification of pleasing and unpleasing scents.2 Hoover, Kara C.; et al. “Global Survey of Variation in a Human Olfactory Receptor Gene Reveals Signatures of Non-Neutral Evolution.” Chemical Senses. 13 June 2015. Accessed 27 September 2017. http://academic.oup.com/chemse/article-lookup/doi/10.1093/chemse/bjv030 Therefore, it could be that when two people have similar senses of smell and olfactory preferences they might be more biologically wired toward compatibility in general.

While this may not be the most conclusive research since it focused on a relatively small population sample, it does make an interesting connection. And it also brings up a good point to ponder: If you take your diet fairly seriously and try to eat nutritiously most of the time, what do you do if you go on a few dates with someone who is clearly a junk food junkie?

Assuming you seem to be well suited for each other in most other areas, you might not need to give up on the possibility of a good relationship with this person. After all, the research did not suggest that the couples tended to sink to the lowest common denominator of food choices, only that they tended to share preferences. Therefore, you might be able to do pretty well improving this potential mate’s taste for healthier fare over time, building a life together based on good (or at least moderately not so bad) choices all around.