One Way Your Couch is Making You Dumber 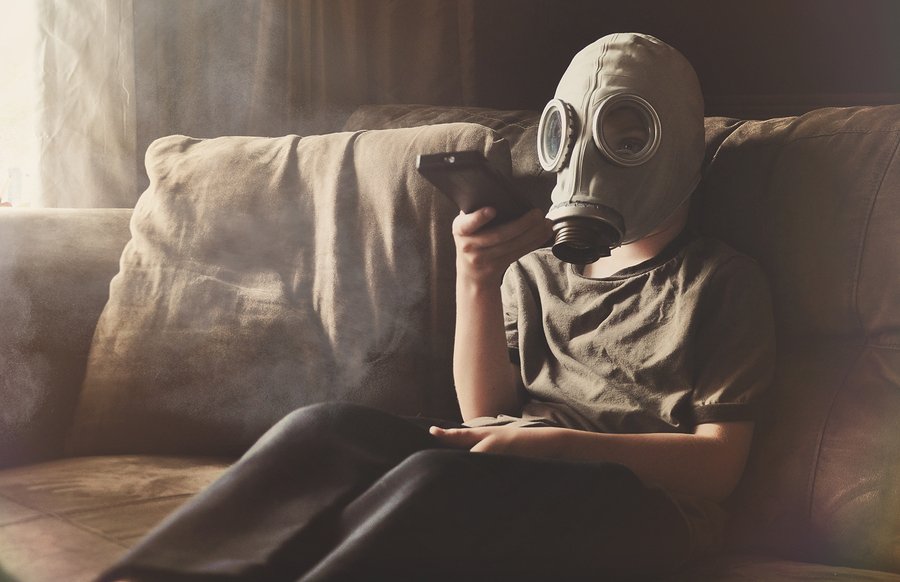 A recent news item announced that flame-retardant chemicals called PBDEs (polybrominated diphenyl ethers) cause Americans to lose about 11 million IQ points a year.1 Rapaport, Lisa. “Toxic chemicals tied to $340 billion in US health costs and lost wages.” 17 October 2016. Reuters. 17 October 2016. http://www.reuters.com/article/us-health-chemicals-environment-idUSKBN12H2KB?feedType=RSS&feedName=healthNews&utm_source=feedburner&utm_medium=feed&utm_campaign=Feed%3A+reuters%2FhealthNews+%28Reuters+Health+News%29 PBDEs were phased out in the US by the end of 2012 due to health concerns, but prior to that time, most couches were slathered with the stuff, meaning that if your couch is more than a few years old, you’ve probably been losing a few brain cells every time you snuggle into the cushions. PBDEs have other profound health impacts beyond making people dumber, but given that 20 percent of Americans think the sun revolves around the earth and that only 51 percent can identify New York on a map, any injury to intelligence is worrisome.2 Lang, Nico. “14 Surprising Things Americans Don’t Know, According to Poll Numbers.” 7 October 2013. Thought Catalog. 18 October 2016. http://thoughtcatalog.com/nico-lang/2013/10/14-surprising-things-americans-dont-know-according-to-poll-numbers/ Who can afford to fritter away smart cells?

PBDEs are so omnipresent in the environment that it’s highly likely you’ve already had a heaping dose, and you might continue to get one every time you relax in your living room, depending on the age of your furniture.  A 2012 study found that 94 percent of all couches manufactured after 2005 contained flame retardants, so it’s highly likely that you have a couch laden with some version of the stuff.3 Israel, Brett. “Toxic couches: Flame retardants on rise in furniture, study finds.” 28 November 2012. Environmental Health News. 18 October 2016. http://www.environmentalhealthnews.org/ehs/news/2012/toxic-couches That same study found a variation in concentration, with some sofas sporting “only” four to five percent flame retardant by weight, but others as much as 11 percent.

What about if you have a smacking new couch? Unfortunately, PBDEs have been replaced with newer chemicals, and at least some of these chemicals still being used are nasty.  For instance, one chemical commonly found in flame retardants now used on newer couches is chlorinated tris, or TDCPP.4 “Why are Toxic Flame Retardants Still All Around Us?” 2016. Environmental Defense Fund. 20 October 2016. http://www.edf.org/health/dangers-of-toxic-chemicals-flame-retardants It’s a suspected carcinogen, and in fact, a similar chemical was banned from children’s clothing back in the 1970’s after health concerns surfaced. Plus, there are plenty of other chemicals used in the next-generation flame retardants that we know very little about. They could be better than PBDEs; they could be much worse.

But back to the study at hand. Can sitting on your couch really undermine your smarts? Sure can, according to a study just published in The Lancet Diabetes and Endocrinology. The study found, in addition to the above-cited IQ shocker, that PBDEs alone cause 43,000 cases of intellectual disability in the US annually. In Europe, where PBDEs have been banned from furniture since 2008 and were less omnipresent even back then, there are only 3200 cases a year. Likewise, across all of Europe, only 873,000 IQ points are lost a year due to PBDEs, less than a tenth of the US total in spite of the fact that the population of Europe exceeds that of the US by 425 million, once again reinforcing the fact that the chemicals do, indeed, affect the brain. No wonder those European kids smoke the Americans in standardized tests.

The kicker is that given all the havoc wreaked by PBDEs and other flame retardants (again, to say nothing of the physical problems caused), the chemicals don’t seem to do the job they’re supposed to.  According to Linda Birnbaum, Director of the National Institute of Environmental Health Sciences, “There is growing evidence that at the concentrations used in products, they are not protective against fires.”

The good news is that in 2014, California passed a new law that allowed couches to be sold without flame retardants provided they pass a “smolder test” proving that they aren’t flammable.6 Webb, Irina. “TB 117-2013: What Does it Mean For You?” I Read Labels for You. 20 October 2016. http://ireadlabelsforyou.com/tb-117-2013-what-does-t-mean/ Fifteen other states caught the inspiration and have similar laws in the works. Unfortunately, California’s legislation got held up by lawsuits filed by flame retardant companies, but resolution will hopefully come soon. Also, the law still allows the use of the chemicals, but some manufacturers are taking the hint and creating safer furniture.

If you’re undecided about whether it’s worth trading in your comfy sofa, you might want to watch the film Toxic Hot Seatdirected by James Redford.
http://youtu.be/_hWwfcsJXHM

Should that convince you to avoid the chemicals, you can buy non-toxic furniture from stores like Ikea or Pottery Barn, or check out the list of “safe” sofa manufacturers at the Environmental Working Group website.7 Safe Sofa Guide.” September 2016. Gimme the Good Stuff. 19 October 2016. http://gimmethegoodstuff.org/safe-product-guides/sofa/ Choose furniture labeled with a TB117-2013 tag, which means the furniture was manufactured after the California law was enacted, and ask the manufacturer if the piece was  treated with fire retardant just to be sure. If you just can’t part with the couch you’re already sitting on, know that it’s important to keep the covering on the cushions if there’s foam underneath, because the foam is where the bad stuff is.