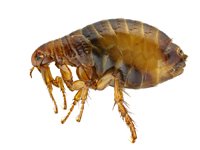 A Bug’s Story might make fleas look like darling little critters, but anyone who has suffered flea bites might have a less benevolent view. Fleas can provoke pacifists to use whatever aggressive method of destruction the experts recommend–from poisonous insecticides to bombs. You can’t just ignore fleas, because unless you do something fast, a few on your dog’s back will multiply into a thick swarm in a matter of days. Fleas usually enter people’s lives via their pets. Cats and dogs pick them up from other animals or from the outdoors, and then they bring them inside.

Here’s the math: Each flea produces 40 to 50 eggs per day, up to 2000 per lifetime.1 Lee, Justine DVM. “Flea Proof Your Pets. Prevention. 18 August 2013. http://www.prevention.com/health/healthy-living/keep-your-pet-free-fleas Three fleas left alone for five days could produce 750 young ‘uns, and each of those newborns also would breed. So in a week, if you do nothing, your house would host tens of thousands of fleas. They get into rugs, crevices, and bedding, where they can hunker down and survive for almost two years until a warm-blooded host comes along to bite.

Flea bites not only itch like crazy, but they also can cause significant problems. Many pets are allergic to the bites and develop dermatitis and hair loss from scratching. Fleas spread tapeworm. The little buggers can consume up to 15 times their body weight in blood (that fact alone makes P.T. Flea2 http://www.youtube.com/watch?v=frwMOhgwGHE a lot less endearing), which means that a pet infested with enough of them can develop anemia and even die from blood loss. And, like many bugs, fleas can carry nasty diseases. For instance, they’re the prime source of bubonic plague in the US–and yes, the plague does still infect people in some of the Western States, particularly in northern New Mexico, Arizona, and southern Colorado.3 “Plague.” Centers for Disease Control and Prevention. 18 August 2013. http://www.cdc.gov/plague/maps/

The first line of defense really is prevention, because fleas are breathtakingly hardy and it takes work to be rid of them once an infestation begins. You can’t trap them, shoot them, or drown them. Although they’re tinier than ants, they can jump up to a few feet at a time, up to 10,000 times in a row, making them nearly impossible to catch. fn] “Fleas.” ASPCA. 18 August 2013. http://www.aspca.org/pet-care/dog-care/fleas [/fn]  They can survive immersion in water, which rules out bathing as a fix. So again, prevention is the easiest curative, but how do you prevent fleas?

Almost all veterinarians recommend several products that have come onto the market since about 2000.  First, there are the topical, spot-on preventative liquids that you apply between your pet’s shoulder blades and along a few spots on the back, where your pet can’t lick it off. Once applied, the liquid travels through the oils on the pet’s skin to cover the entire body. The top brands include Advantage and Frontline Plus, usually distributed at the vet’s office, although Costco now stocks the stuff and even has its own brand. These preparations kill fleas and flea eggs on contact. As fleas hop from your carpet to your dog, they die, so eventually, they will get rid of the fleas in your home, too. These products can work well to eradicate fleas, but they do contain insecticides.

No worries, say the experts. The products purportedly are far safer for pets than the sprays and flea collars that had been the standard in the past, because they supposedly remain on the oily layer of the animal’s skin without ever entering the bloodstream. The manufacturers claim that if applied correctly, most pets have no adverse reactions. Pet owners are cautioned to avoid petting the area where the pesticide got applied until it dries, but of course, people do forget, or the kids don’t know, and there you have your first problem with the product.

The second problem is that the products do contain ugly pesticides such as midacloprid, fipronil, permethrin, methoprene, and pyriproxyfen, and there’s mounting evidence, despite the experts’ assurances, that those pesticides can indeed enter the pet’s bloodstream. In fact, pets can manifest a range of worrisome reactions to topical treatment including rashes, diarrhea, breathing problems, vomiting, and seizures.4 Cone, Marla. “Pet flea treatments can be dangerous, more safety steps in the works, EPA says.” 18 March 2010. Environmental Health News. 19 July 2013. http://www.environmentalhealthnews.org/ehs/news/pet-pesticides In 2008 alone, there were 600 pet deaths reported as a direct consequence of treatment with Frontline or Advantage. The number of reported adverse health reactions spiked that year, increasing from 28,895 in 2007 to 44,263 in 2008. This prompted the Environmental Protection Agency to conduct investigations, and after a year of study, the Agency concluded that small dogs in particular are extremely vulnerable to problems with the spot-on treatments.

EPA Assistant Director Steve Owens said, “These are poisons that we are applying to our pets. Pet owners should exercise caution.” In studies conducted by the EPA, it was found that the pesticides from Frontline did, in fact, cross the oil barrier potentially causing thyroid toxicity and nervous system damage, with the potential to induce thyroid cancer, damage to the liver and kidneys, and reduce fertility.5 “The Dangers of Flea and Tick Products.” Natural Pet. 19 July 2013. http://www.dogsnaturallymagazine.com/the-dangers-of-flea-and-tick-products/ Advantage tests showed that the active ingredient, Imidacoprid, increased cholesterol levels in dogs, caused thyroid lesions, created liver toxicity, and could harm the liver, heart, lungs, spleen, adrenals, brain, and gonads. And those were just short-term effects. The long-term effects of these products have not been studied, and that’s probably of greater concern since most pets will have treatment with these products regularly over the course of their lifetime. The accumulation of these chemicals makes a full body detox for a pet almost impossible.

And yet, pet owners can purchase Frontline in Walmart and Costco, and as mentioned earlier, most veterinarians give out the stuff like physicians give out Tylenol, with little concern. Those who are “concerned” may recommend another class of products to pet owners–oral tablets. These vary in how they work, but all have the advantage of keeping whatever poisons they contain out of the reach of humans. Instead, the poison goes right into the pet. Capstar, the new darling in the industry, contains Nitenpyram, an insecticide that acts as a neurotoxin for fleas but supposedly passes out of the pet’s system fast, without causing damage.6 http://en.wikipedia.org/wiki/Nitenpyram It only kills the adult fleas that reside on the pet at the time of ingestion, with no residual effects, so it isn’t great for long-term prevention.

Program, another popular favorite, says on its website that it contains “lufenuron, a benzoylphenyl urea (BPU) derivative.7 “Controlling and Preventing Fleas in Dogs.” WebMD. 19 July 2013. http://pets.webmd.com/dogs/guide/dog-flea-control-prevention BPU’s have been tested since the 1970s for their activity on insects. All BPU’s, including lufenuron, are classified as Insect Development Inhibitors (IDI’s).”  In other words, Program prevents flea eggs from hatching, so eventually the flea population dwindles. Although the stuff is touted as being safe for pets, the Vet Info site lists side effects including diarrhea, vomiting, lethargy, depression, hyperactivity, hives, loss of appetite, skin conditions, and difficulty breathing. Because Program only kills flea eggs and Capstar only kills adults, vets often recommend that pets receive a combination of both treatments–doubling the pesticide dose.

The reality is that most pets can tolerate these treatments without any “obvious” problems, and to an owner faced with a flea infestation, whatever kind of flea poison works may seem like a godsend. But before resorting to the convenient pill or drops, you might want to ask yourself if you’d have your kids swallow pesticide tabs to keep bugs away or have a healthy immune system, even if the doc said it was fine. If the answer is no and you love your pets, you might want to think twice before squirting the tube or giving the pill.8 Dudley, Kathleen. “Are ‘Spot On’ Flea Killers Safe?” 19 July 2013. http://www.apnm.org/publications/resources/fleachemfin.pdf

To keep fleas away without bringing poison into the picture, you can try vacuuming your floors every day until the problem subsides, washing all surfaces the pet sits on, bathing the pet every few days with a natural shampoo that has flea deterrents such as cedar oil, pennyroyal, citronella, wormwood, and rosemary oil, and applying food-grade diatomaceous earth to the pet’s coat. Also, fleas don’t like the taste of garlic or brewer’s yeast, so add a teaspoon or so to your pet’s food to make him less tasty to the bugs. It’s a lot of work, but you will get on top of the fleas if you do these things, and in the end you may save on vet bills incurred from “mystery” illnesses and tumors induced by the topical and ingested poisons.

Gallery image with caption: Roundup: a Crack in the Wall

Gallery image with caption: Chemical Buildup on Your Toothbrush