We stand today at a crossroads: One path leads to despair and utter hopelessness. The other leads to total extinction. Let us hope we have the wisdom to make the right choice. —Woody Allen

As if most of us in the United States don’t have enough problems to worry about already, the upcoming presidential election just seems to be one more thing to add to the list. In fact, a recent national poll suggests that more than half of all Americans are feeling some serious strain regarding the current election season.

The online survey, which was conducted by the American Psychological Association (APA) in August, included the responses of more than 3,500 United States residents 18 or older, and the results show that many people are not finding the ubiquitous barrage of political talk that the election is stirring up particularly enjoyable.1 “APA Survey Reveals 2016 Presidential Election Source of Significant Stress for More Than Half of Americans.” American Psychological Association. 13 October 2016. Accessed 16 October 2016. http://www.apa.org/news/press/releases/2016/10/presidential-election-stress.aspx. In fact, 52 percent of all the citizens polled reported that the election is a somewhat or very significant source of stress. And affiliation with a political party really didn’t alleviate their worries: 55 percent of those experiencing stress were registered Democrats and 59 percent were registered Republicans.

Interestingly, gender does not appear to play a role in these politically induced worries. Both men and women reported feeling similar levels of stress throughout the months of presidential campaigning. Age, on the other hand, seems to have a much greater influence. The most election-related stress—59 percent—was found among those deemed “matures,” who were born prior to 1946. That’s somewhat surprising since we might expect that those over the age of 70 would be less likely than younger people to be on the internet or social media sites where heated political talk is a regular feature.

But, as it turns out, many younger members of society, who are probably visiting social media sites much more frequently than their older counterparts, are experiencing only slightly less stress about the impending election. In descending order of reported election-related stress, there was 56 percent among millenials (born between 1982 and 2004), 50 percent among baby boomers (born between 1946 and 1964), and 45 percent among those of generation X (born between 1965 and 1981).

In other words, although age is a factor in the percentages, it still turns out that most of us are going through at least a little agitation over politics at the moment. And it’s difficult to escape even if you power down your laptop and leave your smart phone in another room. Thanks to the mainstream media, you’d have to flip past all of the news coverage on television, go straight to the sports section in the daily paper, and probably even avoid the water cooler at work if you want to avoid exposure.

This brings us to the takeaway from all of this information: try not to overdo on anything—politics or otherwise—that is bringing you stress. Whether you love one candidate and hate the other or just don’t like the way political discourse tends to become very negative very quickly, it’s better to check in now and then on your news sources for any updates rather than getting a steady stream of election chatter in which you are bound to come across something upsetting.

And if you do start feeling overwhelmed with information or frustrated over a particular turn of events, use the same strategies that you would in any other situation to relieve the stress. Go for a walk outside on a beautiful fall day, get in a good workout, meditate for a little while, or unroll your yoga mat and strike some poses. Be healthy; release your tension; and move on to other thoughts because stressing over the outcome isn’t going to do you or your candidate any good. 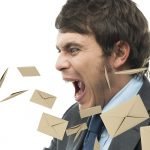