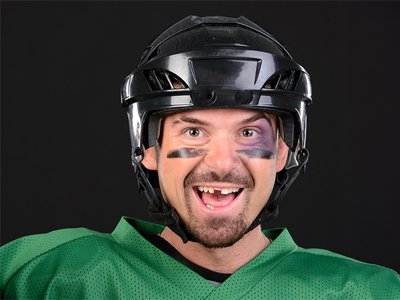 Elite athletes who are at the top of their game, often playing professionally or competing in world-class events, are typically in fabulous physical health. To play at such a high level in most sports, you need to be incredibly fit. Imagine racing up and down a soccer pitch for 90 minutes, chased by some of the world’s fittest athletes while trying to maneuver a ball past defenders, or skating at full throttle across the ice in search of a hurtling puck if you are out of shape and huffing and puffing. Unthinkable! But there is new evidence that there may be one area in which elite athletes might not be so healthy, and it may be bad enough to have an impact on their sports performance.

The study, which was conducted at the University College London in the United Kingdom, found that tooth decay and gum disease are surprisingly common among top athletes and, at times, can be so detrimental that they can’t play to their potential.1 “Bad teeth may hurt elite athletes’ performances, specialists warn.” New York Daily News. 14 October 2014. Accessed 19 October 2014. http://www.nydailynews.com/life-style/health/poor-oral-health-mar-athletes-dreams-specialists-warn-article-1.1973995. And the problems might be at least partially caused by certain foods and drinks consumed as part of their training regimen. The researchers analyzed data compiled from 39 different studies that focused on oral health among both male and female elite athletes.

There was quite a bit of variation in the findings, but none of it was good news for the subjects. Tooth decay, which results in cavities and sometimes toothaches and infection, was present in anywhere from 15 to 75 percent of the participants. Eroded tooth enamel, causing cracks and painfully sensitive teeth, affected between 36 and 85 percent of the athletes. And up to 15 percent of them had periodontal disease, diagnosed as moderate to severe, which can lead to the formation of pockets between teeth and gums and even tooth loss.

And for those of you thinking, “Yes, but people in the United Kingdom are famous for having bad teeth,” the problem turns out to be worldwide. A 2012 study at the University College London that focused on nearly 300 Olympic athletes participating in a wide variety of sports and hailing from several different continents found that not only were oral health issues commonplace, but the athletes reported them as bothersome and even impacting their ability to compete in 18 percent of cases.2 Needleman, I.; et al. “Oral health and impact on performance of athletes participating in the London 2012 Olympic Games: a cross-sectional study.” British Journal of Sports Medicine. 24 September 2013. Accessed 20 October 2014. http://bjsm.bmj.com/content/early/2013/09/24/bjsports-2013-092891.abstract In addition, there has been quite a bit of research linking dental problems with other health issues such as heart disease, diabetes, and rheumatoid arthritis.

So, when these athletes train hard and work at optimizing their health to be among the best in their sport, how is it that these difficulties appear to be cropping up? A big part of the problem seems to be the sports drinks that they often consume in an effort to rehydrate after a tough workout and replenish their electrolytes. However, most of these drinks also offer a lot of sugar, which coats the teeth. If the teeth aren’t brushed right after downing these drinks, the sugars and acids in these “performance” formulas begin doing damage daily.

Another issue is the high carbohydrate diet that many elite athletes stick with prior to intense exercise. While this provides energy for the body to get through the workout, and the calories may well all be burned off, simple carbohydrates quickly break down into sugars. Traces of these sugars will remain in the mouth and stuck to the teeth and build up into damaging plaque.

Even though the research concentrated only on elite athletes, it’s a good bet that many regular exercisers and weekend warriors suffer a similar fate. After all, these same drinks are marketed to them too. In fact, these people are the primary market. Think about the times you allowed yourself a big pasta dinner if you knew you were going on a long run the next morning to make sure you’d have stamina, or guzzled a large Gatorade after finishing a grueling boot camp class. Or simply downed an energy drink or sports drink merely to get through any exercise you were doing.

On the plus side, many of these dental problems are preventable if people just make a few changes and concentrate a little more on oral health. Despite their fabulous marketing campaigns, sports drinks are completely unnecessary. A much better solution is maintaining hydration with plenty of water. For electrolyte balance, you need a little sodium, such as a handful of nuts, and some potassium, which can be found in a banana or oranges. And unless you’re running a marathon, there’s no reason to carbo load if you are eating a nutritionally rich diet that includes sources of complex carbohydrates, vegetables, and beans. Making time to visit the dentist for preventive care and cleanings will benefit your teeth and gums, as will flossing and brushing throughout the day every day.