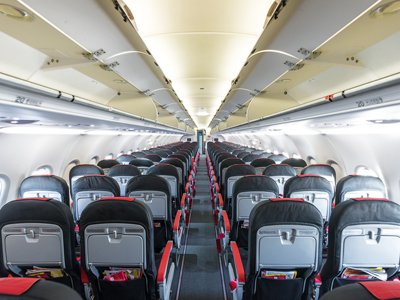 Now that summer is upon us, many people will be planning a vacation. The kids are out of school, lots of businesses have a slow period, and everyone is ready for a getaway. But preparing for your trip might entail doing more than just scouting out an ideal location and researching the best deals on hotels. You might want to take some precautions to protect your health too if you will be flying to your destination, since new research has found that bacteria can live for days on the surfaces we touch in airplanes. Then again, this shouldn’t be much of a surprise as our blogs have previously covered some of the surprising places germs love to hang out.

The study, which was conducted at Auburn University in Alabama, determined that two potentially dangerous types of germs may linger within a plane long after the human carrier who deposited them there has gone.1 Woerner, Amanda. “E. coli, MRSA can linger on airplane surfaces for days, study shows.” Fox News. 20 May 2014. Accessed 25 May 2014. http://www.foxnews.com/health/2014/05/20/ecoli-mrsa-can-linger-on-airplane-surfaces-for-days-study-shows The focus of the experiment was on methicillin-resistant staphylococcus (MRSA) and E. coli 0157: H7. Using six actual surfaces provided by an airline, the researchers exposed every one to both kinds of bacteria and placed them in a controlled environment that simulated that of an airplane cabin. Each item–a plastic tray table, armrest, window shade, metal toilet button, fabric from a seat-back pocket, and leather trim–was then tested repeatedly for the presence of MRSA and E. coli 0157:H7.

MRSA had the longest survival rate on the cloth of the seat pocket, lasting an incredible 168 hours–in other words, a full week! E. coli did not make it quite so long, but still managed to persevere for 96 hours–four full days–on an armrest surface. The scientists reason that these items are more likely to harbor traces of the bacteria because of their porous nature. The tiny openings in the materials provide hiding places for the germs that may not easily be reached by any attempt at cleaning. In contrast, the pathogens died off on the smoother surfaces such as the window shade, tray table, or toilet button more quickly because there was nothing for them to blend into.

While both germs are fairly common, MRSA is the far more hazardous of the two. MRSA is a superbug created by widespread overuse of antibiotics. It is difficult to treat because it has adapted through the years to develop resistance to a range of pharmaceutical medications. Widespread in hospitals, health clubs, schools, and numerous other settings, MRSA produces infections that are increasingly difficult to treat. According to Pew Health Initiatives, this pathogen is responsible for more than 11,000 deaths and 80,000 infections annually in the United States alone.2 “MRSA: A Deadly Pathogen with Fewer and Fewer Treatment Options.” Pew Health Initiatives. 3 April 2012. Accessed 27 May 2014. http://www.pewhealth.org/reports-analysis/issue-briefs/mrsa-a-deadly-pathogen-with-fewer-and-fewer-treatment-options-85899380134

E. coli is a bacterium commonly found in the intestinal tract, but variations such as E. coli 0157:H7 can cause stomach pain, cramping, vomiting, and diarrhea. While those symptoms are certainly uncomfortable, the problem is that infection with E. coli 0157:H7 can truly cause serious problems, including kidney failure, for very young children, the elderly, and anyone with a compromised immune system.

So, while these findings may make you never want to fly the friendly skies again–or at least not touch anything while on the plane–the researchers did point out that there are not many forms of germs that can exist for long in the atmosphere of a jet. The same extremely low humidity in the air of the cabin that can dry your skin makes it a very difficult climate for most bacteria to survive.

Probably the best way to plan for an airplane flight is to treat it the same way you would going to the mall during cold and flu season. The fewer things you touch, the better; wash your hands with soap and water (not antibacterial formulations) pretty frequently; and try not to place your fingers near your eyes, nose, or mouth where you will easily transfer bacteria. And it never hurts to boost your immune system and take natural antipathogens every day during your travels.