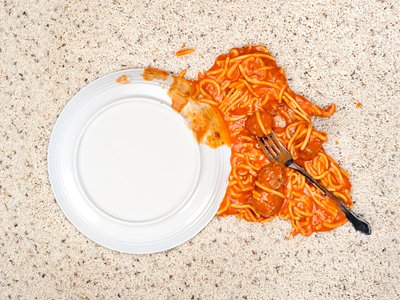 Most everyone is familiar with the five-second rule: the understanding that any food that has fallen on the floor is acceptable to consume as long as you pick it up within five seconds. Plenty of us grew up living by that rule and still firmly believe that food that touched the floor is fine to eat when the contact is so brief. Others, of course, are a little more skeptical and would never consider ingesting anything that has been exposed to germs on a floor, even for a single second. So which camp is right? According to new research, it appears that the five-second rule adherents are basically on the right track, with a few caveats of course.

The study, which was conducted at Aston University in Birmingham, United Kingdom, found that the legendary five-second rule might actually be valid…to a certain extent.1 Git, Aliah. “Is the mythical ‘five-second rule’ actually real?” CBS News. 14 March 2014. Accessed 19 March 2014. http://www.cbsnews.com/news/the-5-second-rule-is-real-study-finds The scientists dropped a variety of edible items on the floor and then tested each of them for the presence of E. coli and Staphylococcus bacteria. The four foods they included were cookies, toast, pasta, and a sticky type of candy. Needless to say, the more damp or tacky the item was, the greater the likelihood that germs were picked up.

But it was not only the kind of food that made a difference in safety after an encounter with the floor. Another important aspect was the amount of time it had remained on the floor–hence the value of the five-second rule. The researchers varied the length of floor time from three to 30 seconds and found that the longer the item had been left on the floor, the higher the bacteria levels it contained. A third aspect that was considered was the type of flooring on which the food landed. The foods that fell on laminate or tile floors and remained there for five seconds or longer showed greater amounts of bacteria than the same foods dropped on carpeted floors.

Part of the experiment included a small survey questioning people as to whether or not they personally observe the five-second rule. Of those they interviewed, a whopping 87 percent admitted to having consumed food that had landed on the floor. And, perhaps more surprisingly, 55 percent of these individuals were women.

So, it would appear that for the most part, it might be safe to eat fallen food as long as you stick to the five-second rule. It seems that a couple of seconds on the floor might not give bacteria much of a chance to transfer to the food. However, common sense obviously has to play a major part in this decision. If a cookie falls on your own recently cleaned kitchen floor, remains there for two seconds before being picked up, and looks clean, chances are it will be okay to eat. However, if any of these variables changes–such as it’s been a while since the floor has seen a mop, the cookie has been lying on the floor for a while, or there is a dust bunny attached to it–you might want to toss it in the garbage pail instead of your mouth. And it probably goes without saying that you should skip eating anything that has fallen on a heavily trafficked public floor, such as that of a restaurant or mall food court…or the floor of your local movie theater.

Most of us know at least one person who will seemingly eat anything, no matter how potentially sketchy it may look to the rest of us. But the risks are definitely not worth it. Bacteria such as Staph and E. coli are among the most common causes of food poisoning. They can lead to fever, cramps, nausea, vomiting, diarrhea, dehydration and more.2 “Food poisoning.” Medline Plus. 22 January 2013. Accessed 21 March 2014. http://www.nlm.nih.gov/medlineplus/ency/article/001652.htm And as bacteria are ever mutating, they become more potentially dangerous to us and can even be deadly.

However, if you are a firm believer in the five-second rule and now feel validated after the findings of this study, you might want to do what you can to maximize your immunity and cleanse your colon regularly. In addition, when food does drop, make sure you don’t get too liberal with your five-second countdown. The longer your food has been on the floor and exposed to germs, the greater the likelihood that you will be sickened in the end.

Gallery image with caption: Your Kitchen May Not Be as Clean as You Think