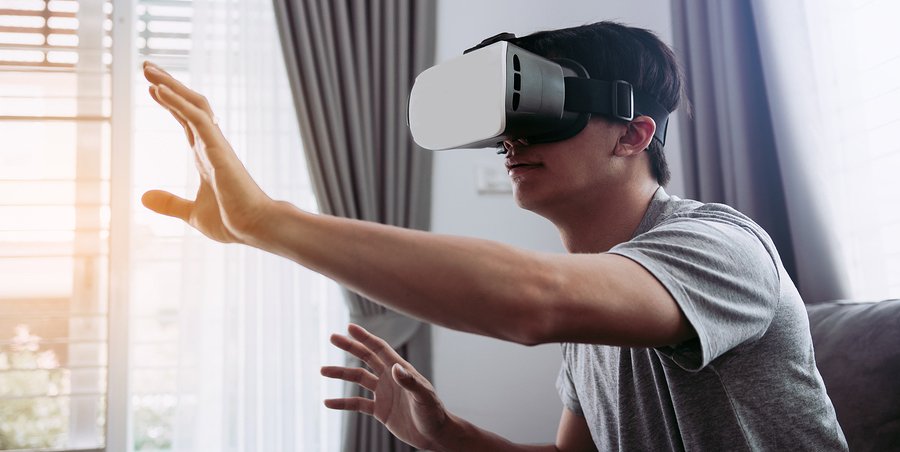 Research on VR and Pain Relief

When you end up in the hospital due to a health problem, one thing is almost certain: you will experience some level of pain. And we know that opioids and many other pharmaceutical drugs used for pain relief are addictive as well as linked to a serious range of side effects. But there is some very encouraging news on the pain management front. New research suggests that the virtual reality (VR) devices that you probably associate with video games or sci-fi movies could offer significant pain reduction.

The study, which took place at Cedars-Sinai Medical Center in Los Angeles, California, found that VR technology may be an effective treatment for pain from a variety of sources, including cancer and orthopedic problems.1Spiegel, Brennan; et al. “Virtual reality for management of pain in hospitalized patients: A randomized comparative effectiveness trial.” PLoS One. 14 August 2019. Accessed 17 August 2019. http://journals.plos.org/plosone/article?id=10.1371/journal.pone.0219115. These results are based on an investigation that included 120 men and women who were hospitalized and in pain. They were randomly divided into two groups, with the first group engaging in their choice of 21 different VR programs and the second group watching health-related videos on television.

All the subjects rated their pain from zero to 10, with zero indicating no pain at all and 10 indicating extreme pain. The participants assigned to the VR, which was recommended for three daily 10-minute sessions plus whenever they were experiencing additional pain, reported an average pain score that was reduced by two points. In contrast, those watching TV reported an average drop in pain score of just half a point. What’s more, among those patients in the most severe pain, the VR therapy was associated with three-point lower scores, while the TV watching was only linked to a drop of close to one point.

How Could Virtual Reality Affect Our Perception of Pain?

VR technology is designed to be an immersive experience, transporting your mind to another place. It is on a completely different level of engagement than watching television, which requires little focus and allows your mind to wander. VR is more closely aligned to pain management techniques such as cognitive behavioral therapy, which involves altering your thoughts about pain and learning coping strategies, and mindful meditation. As we’ve discussed previously, mindful meditation has been shown in studies to achieve long-lasting, drug-free pain relief.

This is all very much in line with what Jon Barron has been saying for years: positive thinking is critical to health, and negative thinking does physical damage. When we are in the hospital, we can spend time dwelling on the pain and becoming depressed, or we can choose to focus our attention on something that takes our mind off the pain and mentally carries us somewhere more enjoyable.

The Downside to VR Pain Therapy

Employing VR technology as a form of pain management may be a step in the right direction, but it is not a perfect form of treatment. In the current research, it moved the pain needle down by a maximum of three points—a huge improvement, but still far from alleviating all pain. And, of course, VR devices for pain treatment are not exactly widely available in hospitals at this point. Then again, they are now easily available for use with programs on your smartphone.

Another potential problem is that use of VR technology can induce cyber sickness in some people. Similar to motion sickness, cybersickness generally produces symptoms like headaches, dizziness, and nausea when wearing a VR headset. It typically resolves on its own after VR use discontinues, but it might render this form of pain treatment unviable for certain individuals. That said, this side effect is still considerably better than those that often crop up when using pain relief drugs, which include addiction, drowsiness, confusion, vomiting, and constipation.