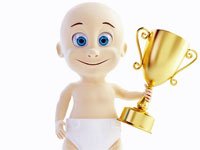 All parents want their children to be happy and self-confident people.  To that end, many moms and dads will try to be enthusiastic and positive about even the smallest accomplishments made by their child.  In the case of kids who are suffering from low self-esteem, a parent will often bend over backwards to try to inflate the child’s ego a little, perhaps hoping that if they hear enough gushing praise the message will begin to stick.  But new research suggests these parents may be undermining their efforts to this end because the exaggerated flattery is affecting their children’s health and causing kids to back away from leaving their safety zone.

The study, which was conducted through Ohio State University in Columbus, found that children who were lacking in confidence did not benefit from overstated parental compliments and in fact would not attempt more complicated tasks after hearing them.1 Briggs, Bill. “Parents sinking some kids with their puffed-up praise, study finds.” NBC News. 3 January 2014. Accessed 5 January 2014. http://www.nbcnews.com/health/parents-sinking-some-kids-their-puffed-praise-study-finds-2D11850594   The subjects were approximately 500 children between the ages of eight and 12 and their parents, approximately 1,000 adults, living in the Netherlands.  The scientists videotaped interactions between the parents and their children in their homes during five-minute encounters in which the children answered questions.

They kept count of the parents’ reactions that included comments the researchers deemed inflated, such as “Super good!” and “You answered very fast!”  It was the mothers and fathers of the kids who had reported themselves as lacking in confidence who were more likely to provide this type of superlative-laden response to their offspring.  These parents offered praise an average of six times in five minutes, with 25 percent of the kudos featuring a pumped up statement that included an adverb such as “incredibly.”

A second portion of the experiment entailed the children viewing a Vincent van Gogh painting and then drawing it themselves.  Afterward, each child was given a note from a person identified as a professional painter.  The messages fell into one of three categories: praise without overenthusiastic wording, exaggerated praise, or no praise at all.  Then, the kids were instructed to work on drawing a picture of their choice, either simple or elaborate.  Interestingly, those with lower self-esteem selected the less demanding drawing more often if their note contained puffed-up praise.  And the kids who had healthy levels of self-esteem were more likely to select the more challenging option if they received effusive flattery.

No one is suggesting that parents, teachers, and other adults involved in children’s lives should forgo giving them accolades.  However, this is not the first evidence that unwarranted praise can actually be undermining and affect children’s health.  A 1998 study at Columbia University in New York, New York, found that while children enjoyed being the recipients of kudos for their intelligence, they tended to give up more easily and not perform as well once they experienced failure as compared to their peers who had been praised for their effort level instead of abilities.2 Mueller, Claudia M. and Dweck, Carol S. “Praise for intelligence can undermine children’s motivation and performance.” Journal of Personality and Social Psychology. July 1998. Accessed 6 January 2014. http://psycnet.apa.org/index.cfm?fa=search.displayRecord&id=6A5B3BBD-DDC4-BC27-36DD-59CD90360A4B&resultID=10&page=1&dbTab=pa&search=true

Many debates have raged in recent years over the merits of praising children regardless of how well they performed at a particular task. A few decades ago, only children who truly excelled in a certain skill were singled out and acclaimed for their talent. But some time in the 1970s, a movement began toward trying to build our children up with the excessive flattery used in the current research. It was based in the belief that it would help all kids feel good about themselves and confident.  But from a very young age, children are aware of who has talents in a particular activity and who does not and telling them how amazingly awesome they did quickly rings false. In fact, most parents can tell you that praise is accepted by their children up through ages 5-6, but after that children know the score. They know when praise is warranted for their achievements and when it’s bogus.

So maybe it is high time we began moving back toward a more reality-based scenario in which children are praised for the effort they put forth rather than for skills that they know they do not have.  To this end, some kids’ sports clubs have stopped providing trophies to every single child who participates.  And for those parents who believe that every child should be recognized regardless of ability or achievement, there are plenty of leagues that still exist to satisfy them.

Gallery image with caption: Lower Anxiety in Kids with Dogs