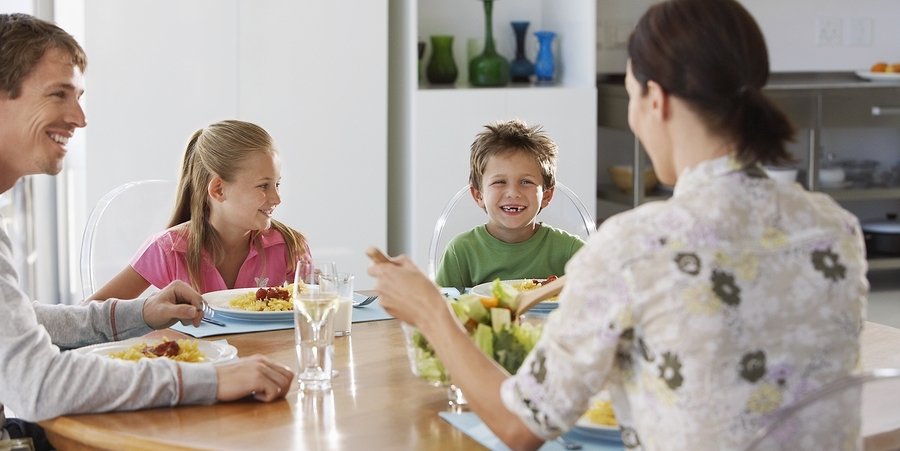 Even if you are sheltering in place, the idea of everyone sitting down to eat dinner together might seem more than a little unrealistic many evenings. But if you can pull it off, even just a few nights a week, it may be very much worth your while. According to new research, it can benefit children greatly when their family dines together often.

The study, which took place at the University of Montreal in Quebec, Canada, found that when a family regularly eats their meals together, the children seem to develop better social skills and have higher fitness levels than their peers who do not often dine with their families.1 Harbec, Marie-Josee and Pagani, Linda S. “Associations Between Early Family Meal Environment Quality and Later Well-Being in School-Age Children.” Journal of Developmental & Behavioral Pediatrics. 5 December 2017. Accessed 17 December 2017. http://journals.lww.com/jrnldbp/Abstract/publishahead/Associations_Between_Early_Family_Meal_Environment.99338.aspx. These results are based on an analysis of data from the Quebec Longitudinal Study of Child Development, which tracked subjects beginning when they were five months old.

All of the 1,492 children who were focused upon for the investigation were born in 1997 or 1998. When they were six years old, their parents began reporting to the researchers on the structure of typical family meals. A few years later when they were 10, the investigators asked questions of the parents, the children, and the children’s teachers that related to various aspects of each child’s behavior, lifestyle, and general well-being.

The kids who frequently dined with their families at the age of six were in a better position at the age of 10 in several areas examined. Those who typically ate family meals tended to have higher levels of physical fitness, greater social skills, and consumed fewer soft drinks compared to their peers who rarely ate meals as a family. In addition, the family-meal eaters were less likely to exhibit behavioral problems including physical aggression, delinquency, hostility, and defiance.

While the study did not explore why children might benefit so much from dining with other family members, there may be several influential factors contributing to these positive effects. Provided televisions are off and cell phones and handheld video games are not allowed at the table, there will be no distractions, which—let’s face it—is a rare occurrence these days. This can allow your family to really talk and listen to each other, find out about each person’s day, discuss something happening in your neighborhood or another part of the world, or talk about literally any topic of interest. A 2010 study at Kyung Hee University in Seoul, Korea showed that parent-child communication and social support can provide children with greater self-esteem and better social interactions with others.2 Sok, SR and Shin, SH. “Comparison of the factors influencing children’s self-esteem between two parent families and single parent families.” Journal of Korean Academy of Nursing. June 2010. Accessed 18 December 2017. http://www.ncbi.nlm.nih.gov/pubmed/20634628.

Why Family Dining May Help Children

Children regularly eating meals with their parents and siblings likely feel more involved in their family units, and have a chance to discuss anything negative that they are experiencing. This could potentially help nip certain problems in the bud, giving the child a chance to get parental input about how to handle something that’s bothering them rather than using their own limited judgment and making a bad choice or acting out to seek the attention of their parents or other adults.

It also makes sense that parents who carve out time for family involvement are more cautious about what their children are consuming, limiting unhealthy items such as soft drinks. This goes hand in hand with fitness levels as well. Families who dine together probably take the time to cook, leading to more nutritious meals and avoiding the fast food route most of the time.

Therefore, these parents become good role models in the kitchen and modeling healthy behavior may also extend to taking the time to plan family activities that are a little more active. Any family time spent together is wonderful, even if it’s watching a movie or sitting around the table playing games. But exercise-oriented outings can be so much fun, like a family hike or bike ride, and can offer long-lasting memories and help your kids establish good habits that carry through to the future.