How To Get Kids to Drink More Water | Children's Health Blog

Getting Kids to Drink More Water 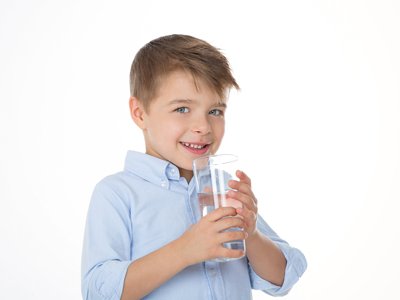 We all know that most children consume a lot of junky beverages every day. Whether it’s sports drinks, sodas, fruit punch, or something similar, what they all typically have in common are a high sugar content and tons of empty calories. So how can we get our kids to instead drink natural, calorie-free water? And no, I’m not talking about using artificially sweetened, squirtable water flavorings such as Mio. In fact, the answer, according to new research, may be as simple as making water more accessible.

The study, which was conducted at the New York University School of Medicine in New York, New York, found that increasing the availability of fresh water at lunchtime in school significantly elevated the amount of water the children drank.1 Neumann, Janice. “Easy access may boost kids’ water consumption.” Reuters. 24 December 2014. Accessed 25 December 2014. http://www.reuters.com/article/2014/12/24/us-health-children-water-intake-idUSKBN0K20YV20141224 The researchers analyzed water consumption among children in 10 New York City public schools prior to the installation of specialized water jets near the cafeterias in these buildings to provide free water to students. Follow-up assessments were performed at all of the schools three months and again 10 months after the arrival of the jets. The water jets involved in the study were large clear plastic jugs that dispensed cool, aerated water, “similar to slushy machines found in convenience stores.”

To comprehensively gather information on the beverage consumption habits of the subjects, the scientists spent time in the schools to take note of how frequently the kids chose water or milk at lunch and the cafeteria managers were interviewed about this as well. The children also answered questionnaires that pertained to the quantity of water they had consumed the previous day, what beverage they typically chose to drink with lunch, and what they thought of the taste of tap water.

Prior to the installation of the water jets, approximately 10 children out of every 100 consumed water at lunchtime. However, that number more than tripled after the jets increased water availability to approximately 34 children in every 100. This was not a short-term, novelty sort of reaction, either. The later follow-up visits found that the boost in water intake remained steady even 10 months later. In contrast, the control students at the schools with no jets drank water at a rate of approximately seven per 100 kids in the pre-2010 testing and less than nine per 100 in the later tests.

One aspect in which the experiment fell short was in its lack of information on whether water would be selected if there were beverages other than milk available. The researchers did note that even with the increase in water consumption, the students’ consumption of milk only went down slightly, suggesting that some children might be opting to have both drinks. But if soda and other kid favorites were equally available, as they likely are to most children after school and on weekends, the percentage of water drinkers might very well drop substantially.

However, schools do have kids for seven hours a day, five days a week, and that is a lot of time to make a difference in developing some healthy habits. If they start drinking water every day, they may adjust to its less flavorful taste. In addition, particularly if they are taught about water’s health benefits, they may begin to consume it more when they’re out of school as well.

And speaking of drinking more water, the schools would be better off providing access to the water jets throughout the day rather than just at lunchtime. First of all, to achieve a decent intake of water we need to consume it on a regular basis and not just at meals. In fact, it is much less healthy to have a great deal of water–or any beverage, for that matter–during a meal. As Jon Barron explains in Your Stomach, Part 3, drinking too much liquid with meals dilutes your digestive juices, which triggers the stomach to produce ever more acid to compensate. In the long term, it messes up the digestive process.

So, whether your child’s school offers special water jets or not, all schools likely have water fountains. They might not be as much fun to use, but will suffice for access. Sending kids to school with a reusable water bottle and reminding them to refill throughout the day can help them develop good habits and possibly even cut lots of needless calories.