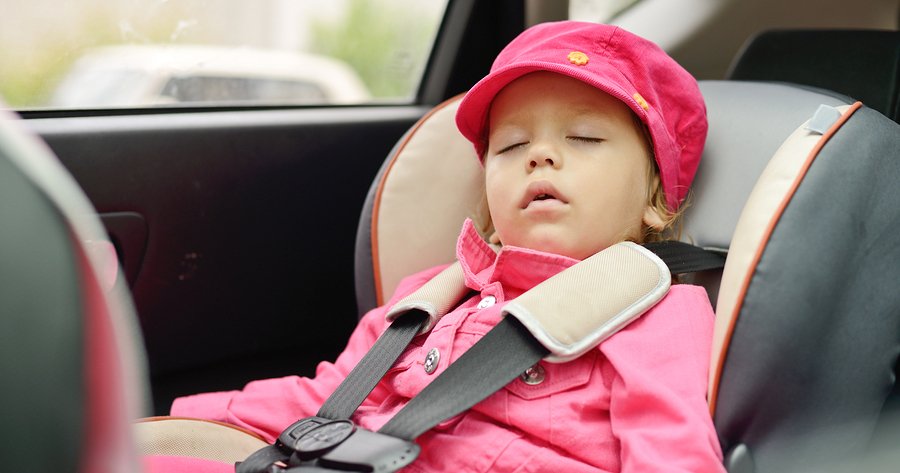 One tried-and-true trick for exhausted parents who can’t get their baby to take a nap is plopping the kid into the car seat and going for a ride. The vibration helps them fall asleep. (In fact, you can buy devices such as the Sleep Tight Infant Soother that simulate that vibration that attach to your baby’s crib.1 http://sleeptightinfantsoother.com/ ) Once the little one is soundly slumbering, you can usually drive back home, pop the car seat out and leave the baby sleeping in the seat on the floor while you take a well-deserved rest on the couch. But now, new research suggests that this may not be the best course of action for the safety of your child. In fact, leaving a baby sleeping in a car seat might be downright dangerous.

The study, which was conducted at the Penn State Milton S. Hershey Medical Center in Hershey, Pennsylvania, found that putting young children to sleep in any type of sitting device, including a car seat, may actually put them at risk of death.2 Blaszczak Boxe, Agata. “Letting babies nap in car seats could be deadly, experts warn.” Fox News. 24 April 2015. Accessed 29 April 2015. http://www.foxnews.com/health/2015/04/24/letting-babies-nap-in-car-seats-could-be-deadly-experts-warn/ The focus of the investigation was 47 instances of mortality in children under two years old that occurred while they were in some sort of carrier or seat.

The majority of the cases–approximately two-thirds, in fact–that were analyzed involved the use of a car seat. For the remaining one-third, the baby had been in a carrying sling, bouncer seat, swing, or stroller. The children were mostly reported to be in these devices to encourage them to sleep. Babies are often soothed by the light motion these various accessories can provide, which helps them doze off.

Unfortunately, nearly all of the fatalities that were studied in this research were the result of suffocation or strangulation while the child was seated in a device. The babies simply could not breathe in a sufficient amount of air. This was either due to some sort of strap or harness, such as a car seat buckle, strangling the child or to a shift in the child’s body positioning that cut off the air flow. These deaths are all the more tragic because they were completely preventable.

On the chance that you are now shaking your head and thinking that this is an example of negligent parenting or care giving, with the baby likely left alone for hours, that was not necessarily the case. Some of the babies had only been unsupervised for a matter of minutes. The time range of the period between which a care giver left the child and returned to check on her or him varied widely from a mere four minutes to 11 hours, which presumably was not a nap but an overnight sleep instead. And yes, it certainly might be questionable judgment to leave a baby in a car seat or stroller overnight.

The study did not gather evidence as to how frequently these types of deaths might occur. But a 2013 report from the U.S. Consumer Product Safety Commission found that the total number of deaths among children younger than five in infant carriers or car seats (not including motor vehicle accidents) was 36 between 2008 and 2010, or an average of 12 per year.3 Chowdhury, Risana T. “Injuries and Deaths Associated with Nursery Products Among Children Younger than Age Five.” Consumer Product Safety Commission. December 2013. Accessed 30 April 2015. http://www.cpsc.gov//Global/Research-and-Statistics/Injury-Statistics/Toys/nurseryproductsinjuries121313FINAL.pdf Even if mortality in a car seat or another seating device is relatively rare, all parents, grandparents, babysitters, and just about anyone who ever has responsibility for a young child should be aware of these risks.

So what can you do if your baby is a fussy type who screams and screams when placed in his or her crib for a nap? It is definitely worthwhile to find a way to make crib napping work, especially if your child is willing to sleep there at night. You may just have to check in every few minutes while the baby cries to let your little one know you are there with some soft words, but remain firm about not taking your child out until a nap has been achieved. And if only a car ride will do, you can always try the Sleep Tight Infant Soother, which simulates your car’s vibration.

Of course, other times you may need to be out during naptime and it’s unrealistic to think you can always get baby back to the crib. In those cases, it’s essential not to rush and to be vigilant when securing baby’s straps and placement in any kind of seat–to make sure they are secure and at no risk of slipping into strangulation. Check on your child regularly to make sure that nothing has gone wrong. You don’t need to become overly anxious, but a good dose of concern when the baby is sleeping anywhere other than a crib can go a long way toward keeping your child safe.