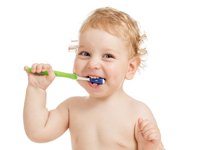 If it’s unhealthy but profitable, commerce seems to find a way to make sure the questionable product finds its way into every household in the US. Take fluoride, for instance. We’ve written several times in the past about the fact that fluoride poses serious health risks. In spite of its dangers, our regulating agencies have given fluoride the big thumbs up, pointing to its ability to ostensibly prevent cavities. It’s worrisome enough that we find added fluoride in our municipal water supplies and in many commercial toothpastes, but now the love affair with fluoride has gone one step beyond.

The American Dental Association (ADA) announced last week its recommendation that as soon as babies cut their first tooth, they should start brushing with fluoride toothpaste.1 Saint Louis, Catherine. “Dental Group Advises Flouride Toothpaste Before Age 2.” 12 February 2014. The New York Times. 16 February 2014 The recommendation calls for toddlers aged six months and up to start the brushing regimen. According to Dr. Truelove of the ADA, “Approximately 25 percent of children have or had cavities before entering kindergarten, so it’s important to provide guidance to caregivers on the appropriate use of fluoride toothpaste to help prevent their children from developing cavities.”fn] Baulkman, Jaleesa. “ADA Recommends Flouride Toothpaste as Soon as First Tooth Comes In.” 13 February 2014. University Herald. 16 February 2014. http://www.universityherald.com/articles/7497/20140213/ada-recommends-fluoride-toothpaste-as-soon-as-first-tooth-comes-in.htm [/fn]

The agency says that babies should receive just a small smear of toothpaste since they tend to ingest it. Swallowing toothpaste before the age of eight can trigger a condition called “fluorosis,” which leads to spotting, pitting, and discoloration of the teeth.  Apparently, the ADA’s only concern in terms of health risks is that brushing with fluoride could lead to fluorosis.

“We want to minimize the amount of fluoride consumption to reduce the risk of fluorosis while simultaneously adding a preventive tool for kids 2 and under that we haven’t recommended previously,” said Dr. Jonathan Shenkin, a pediatric dentist from Augusta, Maine, and ADA spokesman.

In spite of that risk (to say nothing about more serious risks, but we’ll get to those in a moment), the ADA says “By starting earlier, we can effectively reduce a lifetime of disease for a lot of kids.” (Considering that baby teeth start falling out around age 6, it’s a bit difficult to understand what “lifetime of disease” they’re referring to.) Their recommendation is based on a recently completed review of 17 studies that found fluoride does indeed reduce tooth decay.” The studies, however, focused on older children and admittedly neglected kids under age two. It should also be pointed out that at least that many other studies contradict their conclusion. No matter: the recommendation stands.

It’s interesting and somewhat shocking that the announcement to start brushing baby teeth came without much notice of some of the potential risks associated with fluoride. While the scientific community remains steadfast in its claim that fluoride is perfectly safe in dental applications, the fact remains that fluoride is a poison. It’s a common ingredient in pesticides and rodenticides, used to kill rats.  It’s true that the dental dose is far smaller than the rat killing dose, but not everyone is convinced that it’s safe at the tiny doses found in toothpaste, particularly because of its cumulative effects. And plenty of research has found that those cumulative effects can lead to serious health consequences.

For instance, numerous studies have linked fluoride with various forms of brain damage.2 FlourideAlert.org. http://fluoridealert.org/issues/health/brain/ A review conducted by the National Research Council in 2006 concluded, “Studies of populations exposed to different concentrations of fluoride should be undertaken to evaluate neurochemical changes that may be associated with dementia. Consideration should be given to assessing effects from chronic exposure, effects that might be delayed or occur late-in-life, and individual susceptibility.”

More recently, in 2012, researchers from Harvard University analyzed 27 studies reviewing the relationship between IQ and fluoride exposure. In nearly every case, they found that fluoride exposure reduces intelligence–which, when you think about it, should make it easier to get people to follow the ADA’s new recommendations. One of the study authors, Dr. Phillipe Grandjean wrote, “Fluoride seems to fit in with lead, mercury, and other poisons that cause chemical brain drain.”

Also, more than 30 studies have found that early exposure to excess fluoride can lead to neurological problems in children.

If you’re not worried about the effects on the brain, note that other health conditions associated with fluoride exposure include cancer, arthritis, diabetes, increased risk of fracture, kidney disease, thyroid disease, cardiovascular problems and endocrine damage. And babies are far more vulnerable to the potential damage than are adults.3 FlourideAlert.org http://fluoridealert.org/issues/infant-exposure/ The kidneys in babies aren’t developed enough to excrete fluoride as efficiently as adults can, and so the toxin builds up in the developing body. Plus, the blood brain-barrier still isn’t fully developed in infants, so that fluoride more easily passes to the brain, allowing it to cause developmental problems.

Jon Barron has written in the past about the outcry to stop water fluoridation, and yet, 70 percent of the water supply in the US contains fluoride. It seems that our regulating agencies are hell bent on ignoring evidence that fluoride might do harm, in favor of blessing children with cavity-free (but potentially mottled) teeth.  The ADA justifies its recommendation by citing the fact that 16 million kids in the United States have cavities and that the number of pre-schoolers with cavities is on the rise.

Certainly juvenile cavities and dental problems are serious business, but might not a wiser approach to reversing the trend toward dental decay be to work toward controlling junk food consumption by children so that they don’t get as many cavities in the first place? Countries like Austria, Belgium, China, Czech Republic, Denmark, Finland, France, Germany, Hungary, India, Israel, Japan, Luxembourg, Netherlands, Northern Ireland, Norway, Scotland, Sweden, and Switzerland seem to think so. They all refuse to fluoridate their water supplies. Makes you wonder what the ADA is thinking.