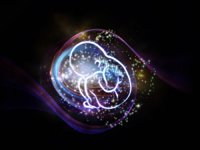 With one in every 88 children in the United States diagnosed with autism now, parents are rightfully concerned about this incurable disorder.1 “Facts about Autism.” Autism Speaks. Accessed 3 May 2013. http://www.autismspeaks.org/what-autism/facts-about-autism   But the signs of autism are often not clear until language delays, difficulties interacting with others, and repetitive actions become evident, which may not happen until a child is at least three years old.  Now, however, parents may not need to wait so long.  There is new research suggesting that anomalies present in the placenta at birth may help determine a higher risk of autism diagnosis in babies.

The study, which took place at the Yale School of Medicine in New Haven, Connecticut, found abnormal folds and creases that may be indicative of a much greater chance of autism in that child.2 “Abnormal Placentas At Birth Reveal Increased Risk For Autism.” Medical News Today. 27 April 2013. Accessed 1 May 2013. http://www.medicalnewstoday.com/releases/259653.php  The researchers analyzed the placentas of 117 babies deemed at a higher risk because of a child or children in their immediate family with autism.  They also analyzed the placentas of 100 births from the same geographic region that came from families with no known family history of autism.

If these trophoblast inclusions truly are markers of an elevated autism risk, this research may prove very beneficial for helping autistic children at a much younger age.  Early intervention therapies that take place before a child is three years old have been shown to make a difference.  A 2012 study at the Yale School of Medicine found that early intervention can improve brain function, communication skills, and modify behavior in autistic children.3 Kearney, Christine. “Early Intervention For Autism Shows Major Brain Changes.” Medical News Today. 7 November 2012. Accessed 3 May 2013. http://www.medicalnewstoday.com/articles/252463.php

What we don’t know, however, is just how often the appearance of these trophoblast inclusions will actually turn out to be a case of autism and not just a risk.  Not everyone with an increased risk of any type of condition develops it.  At the moment, anyone’s best guess of which babies will end up with autism is mainly based on family history.  Scientists estimate that having one child with autism raises a couple’s risk of having another autistic child nine-fold.  A better system would be wonderful, especially for couples who have no children yet, but this study is not conclusive enough to begin any new protocols.

There still seem to be many more questions about autism than answers.  After all, one new study that took place at the Icahn School of Medicine at Mount Sinai in New York, found that autism is influenced by the age of the baby’s grandfather.4 Bakalar, Nicholas. “Grandfathers’ Age Linked to Autism.” New York Times. 29 March 2013. Accessed 3 May 2013. http://well.blogs.nytimes.com/2013/03/29/grandfathers-age-linked-to-autism    In that research, the risk was increased for the infants of expectant grandfathers who had their children (one of the baby’s parents) when they were older.

Other recent research at Aarhus University Hospital in Denmark, established a link to use of the anti-seizure medication valproate during pregnancy.  The babies of mothers who took the drug had twice the rate of autism as opposed to those born to women who had not used valproate.5 Healy, Melissa. “Epilepsy drug in pregnancy linked to baby’s higher autism risk.” Los Angeles Times. 24 April 2013. Accessed 3 May 2013   Still another study, this one out of the Mount Sinai Medical School in New York City, found a connection to 10 common chemicals and autism as well as other learning disabilities.  These chemicals include lead, mercury (the reason so many mothers are concerned about the use of childhood immunization shots that contain mercury), certain pesticides, PCBs, hormone disruptors, and more.6 Zerbe, Leah. “The Cause of Autism?” Prevention. April 2012. Accessed 3 May 2013. http://www.prevention.com/health/health-concerns/10-chemicals-linked-autism   And other research from various laboratories and facilities throughout the world over the past few years has tied autism to everything from overweight mothers to vitamin D deficiency to closely occurring pregnancies.7 Hansen, Lauren. “13 things ‘linked’ to autism.” The Week. 17 January 2013. Accessed 3 May 2013. http://theweek.com/article/index/238898/13-things-linked-to-autism

In other words, it would appear that nearly everything we eat, breathe, and come into contact with is potentially a cause of autism.  It may very well be that the rates of autism have skyrocketed not only because of better diagnosis, but because of many external influences having to do with the way we live today.  Perhaps the best any of us can do as we consider parenthood is try to maintain as healthy and natural a lifestyle as possible both before and during pregnancy…and do a full body detox before pregnancy.