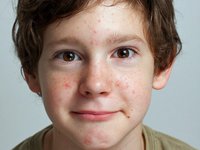 Growing up can be tough, long before kids even hit their teenage years.  Dealing with playground bullies, finding their way socially at school, and mastering new subjects along with plenty of homework are just a few of the trials and tribulations for elementary school children.  Now, on top of that, they may have to potentially handle a distinctly adolescent issue: the development of acne.  According to pediatric dermatologists, acne has begun to strike younger and younger kids.

The problem is already so pervasive that the topic was addressed and recommended new treatment guidelines were presented this summer at an American Academy of Dermatology meeting.1 Dahl, Melissa. “Acne in elementary school? Pimples are starting younger, dermatologists say.” NBC News. 2 August 2013. Accessed 13 August 2013. http://www.nbcnews.com/health/acne-elementary-school-pimples-are-starting-younger-dermatologists-say-6C10824617   This response is due to evidence pointed out by dermatologists all over the United States, who have in recent years been treating children well before they become teenagers for breakouts on their skin.  While the acne seen in most younger kids isn’t typically severe, it is appearing in some cases in children who are only 7 or 8 years old.  They are developing the open and closed comedones–better known as blackheads and whiteheads–in the T-zone of the forehead, nose, and chin that are normally not common until teenage years.

Pediatric acne is a tough children’s health issue because it becomes one more potential stressor to cope with.  It can quickly escalate into something for other children to tease about, leading to a nosedive in self-esteem.  Plus, early breakouts are often a precursor to considerably worse forms of acne such as nodules and cysts, which involve skin inflammation and the potential for permanent scarring, as the child gets older.

So what’s causing this trend toward skin problems in kids who may still be playing with dolls or have training wheels on their bikes?  Doctors are pinning the blame on the earlier onset of puberty that has increasingly become the norm over the past few decades.  This theory makes sense, as acne is often triggered by hormones known as adrenal androgens.  These male hormones that naturally occur in both genders play a significant role in the production of excess sebum in the oil glands.  Adrenal androgens also increase the rate of skin cell shedding, which combined with the sebum results in the clogged follicles that appear as acne.

And we know for a fact that puberty is starting sooner in many kids. A 2010 study at Cincinnati Children’s Hospital in Ohio found that more than 10 percent of white seven-year-old female subjects in the mid-2000s had begun puberty, whereas that number was only five percent in the early 1990s, and among black seven-year-old subjects, 23 percent had begun puberty versus 15 percent in the early 1990s.2 Biro, Frank M.; et al. “Pubertal Assessment Method and Baseline Characteristics in a Mixed Longitudinal Study of Girls.” Pediatrics. 3 September 2010. Accessed 14 August 2013. http://pediatrics.aappublications.org/content/126/3/e583.abstract?sid=38b0e3d6-d5ec-4a55-a2a2-ea9dd6926755   Boys still do not typically begin showing signs of puberty as early as girls, but their timetable has moved up as well.  A 2012 study at the University of North Carolina Chapel Hill determined that boys are beginning to enter puberty anywhere from six months to two years earlier than what has long been the standard age of 11 1/2 years old.3 Herman-Giddens, Marcia E.; et al. “Secondary Sexual Characteristics in Boys: Data From the Pediatric Research in Office Settings Network.” Pediatrics. 20 October 2012. Accessed 14 August 2013. http://pediatrics.aappublications.org/content/130/5/e1058.abstract?sid=bca5f9b9-385f-4cab-afaf-6c4c2c413997 But if you go back even further, the trend is even more obvious; statistics show that the average age for the onset of puberty in girls in the early 1900s was 15 (17 for boys). By the 1960s, that figure had dropped to 12 (14 for boys), and by the 1990s, it had dropped to 10 (12 for boys).

This is an important issue to call attention to, but as usual, the medical establishment’s response is to find ways to treat the problem on the surface (making the pimples go away) as opposed to finding a solution to the cause or preventing the adolescent acne in the first place.  There is nothing wrong with using an over-the-counter benzoyl peroxide product to clear up a few stray pimples, but if you could slow down the mechanisms that set the puberty–and therefore the breakouts–in motion, wouldn’t that be much better?  Not to mention the fact that if the topical creams the dermatologist suggests aren’t doing the trick, your doctor will most likely turn to antibiotics, which are already ridiculously overused with serious consequences like the creation of superbugs, or retinoids, which may result in irritation, sensitivity to the sun, and skin blistering.

A far better option is to remove all of the hormone-laden foods from your child’s balanced diet by choosing only organic, hormone-free meats and dairy products since we are likely increasing the concentrations of the hormones in their bodies with these items. And, as Jon Barron has stated repeatedly, soy milk is simply not an appropriate drink for children. The phytoestrogen levels are simply too high.  Make sure your children are maintaining a healthy weight and get them exercising too because excess fat has been found to raise estrogen levels.  Ideally, you can get them leading a more natural lifestyle long before any puberty or acne begins, but if not, changes you make in the right direction may help to slow the process. 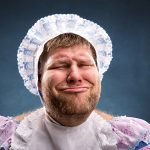