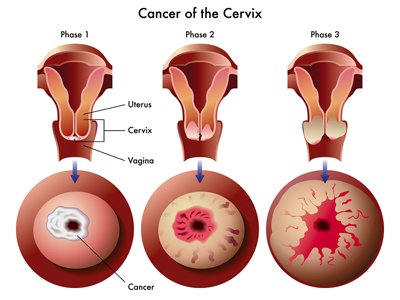 A recent study, conducted at Mount Sinai Hospital in New York, discovered that the rate of cervical cancer in the United States is considerably higher than any other estimates reached before.

Many women are concerned about developing breast cancer. They have good reason, as it is very common, with more than 200,000 new cases diagnosed in the United States each year. Most of us know more than one woman who has had the disease, and that helps us to remember to perform self-exams and schedule those mammogram appointments…for whatever they’re worth. But we probably don’t spend as much time thinking about cervical cancer, and maybe we should. While it is not as common as breast cancer, cervical cancer is actually more deadly. According to the National Cancer Institute, the five-year survival rate for cervical cancer is only about 68 percent (versus 89 percent for breast cancer). And now, new research has found that cervical cancer may be much more widespread than we previously believed.

The study, which was conducted at Mount Sinai Hospital in New York, New York, discovered that the rate of cervical cancer in the United States is considerably higher than any other estimates reached before.1 Cochran, Amanda. “Cervical cancer rate in U.S. higher than previously thought, study says.” CBS News. 12 May 2014. Accessed 21 May 2014. http://www.cbsnews.com/news/cervical-cancer-rate-in-us-higher-than-previously-thought-study-says The researchers looked at the number of cases per 100,000 women but discarded from the analysis all of those women who had undergone a hysterectomy. This population had always been included in previous cervical cancer estimates, which is misleading since total hysterectomies involve the removal of the cervix, making cervical cancer an extremely rare development in women who have undergone the procedure.

Once these women were taken out of the equation, the statistics changed drastically. Overall, the cervical cancer rate was found to increase by 55 percent among women. When the data was broken down by specific age and ethnicity parameters, certain populations were determined to be in even more jeopardy. Older women, specifically those between the ages of 65 and 69, were found to have an 85 percent increase over the former estimates of cervical cancer rates. And African-American women fared worst of all, with a whopping jump in cervical cancer rates of 126 percent.

The main factor responsible for influencing these vast increases for African-American women is a relatively high proportion of them who have had a hysterectomy, often as the result of developing fibroids, which a 2013 study at the Mayo Clinic and Mayo Medical School in Rochester, Minnesota found to be nearly three times more common in African-American women than they are in white women with similar overall health and backgrounds.2 Stewart, Elizabeth A.; et al. “The Burden of Uterine Fibroids for African-American Women: Results of a National Survey.” Journal of Women’s Health. 30 September 2013. Accessed 22 May 2014. http://online.liebertpub.com/doi/abs/10.1089/jwh.2013.4334?journalCode=jwh (Fibroids are usually caused by estrogen dominance.) Age also was found to be an important indicator of cervical cancer risk, with a major rise occurring between the ages of 50 and 65, and a second jump after the age of 70.

All of this is bad news, as cervical cancer is a very dangerous disease. It is diagnosed by the Pap test, which is considered very reliable and recommended for all women between the ages of 21 and 65. But many women stop visiting the gynecologist regularly and taking part in screenings after they are done having children, and this can put them at greater risk. Cervical cancer is primarily caused by infection from the human papilloma virus (HPV). This sexually transmitted disease is the single most common sexually transmitted disease in the U.S. today. But estrogen dominance caused by exposure to chemical estrogens and synthetic hormones in birth control pills may also play a significant role.

HPV is detected through an HPV test, which is only recommended for women over the age of 30 and not recommended for men, making it that much more difficult to determine whether your sexual partner has a clean bill of health. That’s a serious concern, since a 2011 study at the H. Lee Moffitt Cancer Center and Research Institute in Tampa, Florida, determined that approximately half of all adult men are infected with HPV.3 Giuliano, AR; et al. “Incidence and clearance of genital human papillomavirus infection in men (HIM): a cohort study.” Lancet. 12 March 2011. Accessed 22 May 2014. http://www.ncbi.nlm.nih.gov/pubmed/21367446 And, rather than developing better, more complete testing methods, the pharmaceutical companies instead come to the “rescue” with Gardasil, an HPV vaccine they promote for both girls and boys starting at 11 or 12. Not only is there little data proving its long-lasting effectiveness, but this vaccine has been associated with serious reactions such as fainting, blood clots, and even death. The bottom line is that while Garasil may help, it is hardly a panacea, and it’s far from perfectly safe.

We need to take responsibility for ourselves and make sure to be tested for both HPV and cervical cancer regularly. We are much better off increasing the odds of preventing or finding the disease at a very early stage. And if you are HPV-free, try to stay that way by practicing safe sex with condom usage and limiting the number of sexual partners you keep. More than ever, your health may depend on it.