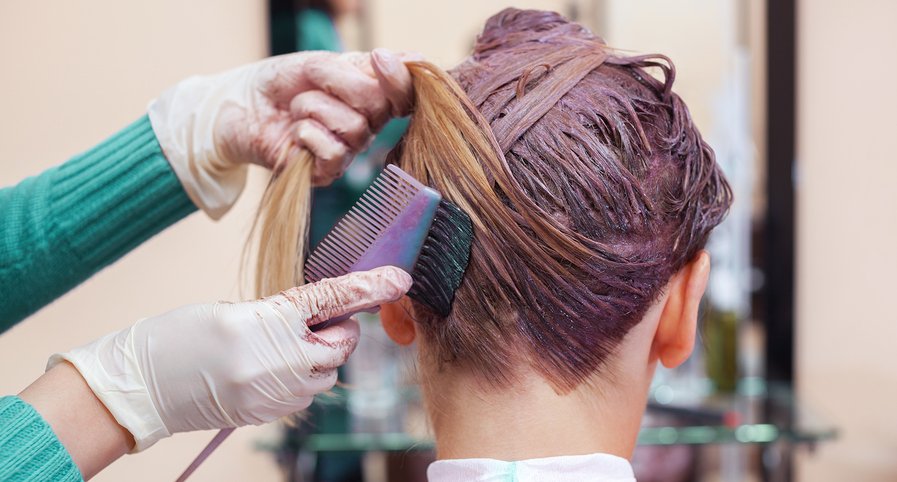 Sometimes referred to as her “crowning glory,” a woman’s hair is one of the first things others may notice. Perhaps that’s why so many ladies subject themselves to hours in a salon for processes like overall color, root touchups, and chemical relaxers to straighten curls and reduce frizz. But the beauty it helps you achieve could be coming at a high price. According to new research, certain hair products might raise a woman’s cancer risk.

The study, which took place at the Rutgers School of Public Health and Rutgers Cancer Institute of New Jersey in New Brunswick, found that using dyes and relaxers may be associated with a greater chance of developing breast cancer.1 Llanos, Adana A.M.; et al. “Hair product use and breast cancer risk among African American and White women.” Carcinogenesis. 9 June 2017. Accessed 25 June 2017. http://academic.oup.com/carcin/article-abstract/doi/10.1093/carcin/bgx060/3866007/Hair-product-use-and-breast-cancer-risk-among?redirectedFrom=fulltext.
Curiously, the risks appear to be different depending on the race of the woman.

The participants were 4,285 black and white women residing in New Jersey or New York City and ranging in age from 20 to 75. More than half of them, 2,280 of the women, were former breast cancer patients. All of the volunteers answered questions about their history of hair care product use, including coloring dyes, relaxers, and deep conditioning creams with cholesterol or placenta, which are promoted for adding moisture to dry hair and repairing hair damage, respectively.

The investigators analyzed the subjects’ reports of what hair processes they underwent against their history of breast cancer. They found disturbing links between hair-care product use and development of the disease—but, again curiously, it was related to different products in the two races. Among black women, hair dyes were the main problem, with a 51 percent greater risk of breast cancer in those who used dark brown or black dye. And the risk of developing the most common form of breast cancer, known as estrogen-receptor positive breast cancer, was even higher at 72 percent in black women. Among white women, however, it was the chemical relaxers that were the issue, with a whopping 74 percent increased risk of breast cancer in those using a relaxer.

Many earlier investigations on the safety of hair dyes have had inconsistent results, but the researchers of the current study point out that black women have not always been included in the population sampling in large numbers. And while this research was not designed to prove cause and effect, it certainly does demonstrate a strong correlation to the use of both dyes and relaxers with an increased likelihood of breast cancer diagnosis. The researchers controlled for a number of factors including age, education level, and usage of birth control pills; and the results held true.

The disparities found in which products were associated with cancer in black women versus white women may be more influenced by the different types of hair care marketed to and used by each group than to any racially based differences among the women. The chemicals in many of these products are applied right up to the roots of the hair, allowing for potential absorption into the scalp. And chemical relaxers were linked in a 2012 study at Boston University in Massachusetts to an elevated risk of uterine leiomyomata, a kind of fibroid, in black women.2 Wise, Lauren A.; et al. “Hair Relaxer Use and Risk of Uterine Leiomyomata in African-American Women.” American Journal of Epidemiology. 1 March 2012. Accessed 26 June 2017. http://www.ncbi.nlm.nih.gov/pmc/articles/PMC3282879/. Plus, the sharp jump in estrogen-receptor positive breast cancer risk noted in the current study among black women using dark brown or black hair dyes suggests that at least some of these products may contain chemicals that affect hormones such as estrogen and progesterone to influence the growth of abnormal cells.

So, what’s a woman to do if she likes her hair smooth and straight or is desperate to cover her premature grays? While a cream created to cure gray hair never materialized, some people report fewer grays when taking an antioxidant formula or supplementing with Omega-3 oils.

Coloring hasn’t been proven safe, but if you’re determined to go that route, you might want to choose methods that don’t require application all the way to the roots, such as highlights that can be painted on and covered in foil as they process to avoid the scalp area. You also might want to consider more natural coloring products that avoid harsh chemicals such as peroxide and ammonia, as well as chemical dyes. Straightening may be achieved more naturally with good, old fashioned blow drying or occasional flat ironing. Even if you can’t necessarily get it as pin straight as the relaxers do, the risks greatly outweigh the benefits.