Do Your Lightbulbs Cause Cancer? 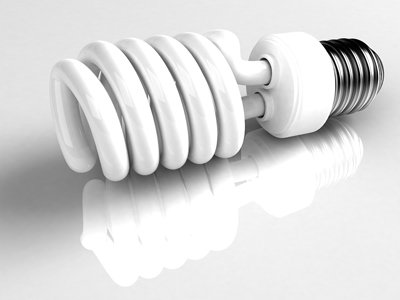 If you’ve gone shopping for lightbulbs lately, you might have noticed that old-fashioned incandescent bulbs are in short supply, or maybe even in “no supply.” That’s because, in accordance with the Energy Independence and Security Act of 2007, most varieties of incandescent bulbs are no longer being manufactured. 1 “EISA of 2007: An Overview.” Bulbs.com. 29 January 2015. http://www.bulbs.com/learning/phaseoutoverview.aspx The phase-out started in January of 2012, which saw the end of the 100-watt incandescent, and concluded in January of 2014, when industry stopped producing 40-watt incandescent bulbs. Currently, if you need to replace a bulb, your cheapest option is one of those spiral compact fluorescents (CFLs).

Given that so many of us spend the majority of our time indoors, and that we’re often under artificial lighting even during daylight hours, it’s important to know what the switch to CFL (compact fluorescent) bulbs means healthwise. We wrote a few years ago about the dangers of compact florescent bulbs, but at that time, we focused on the hazards they posed if broken since they contain mercury which releases into the air upon shattering. Now, with compact fluorescent lighting becoming as omnipresent as mosquitos in the Bayou, a few other issues bear investigation.

It turns out that that while CFLs might provide a significant environmental advantage, even with the mercury issue, they potentially do a number on our bodies. A study a few years ago out of Stony Brook University in New York found that all of the CFLs tested–and the researchers tested bulbs purchased from stores across the region–had small cracks in their protective coatings.2 “SBU Study Reveals Harmful Effects of CFL Bulbs to Skin.” 18 July 2012. Stony Brook News. 29 January 2015.  http://commcgi.cc.stonybrook.edu/am2/publish/General_University_News_2/SBU_Study_Reveals_Harmful_Effects_of_CFL_Bulbs_to_Skin.shtml   The result was that high levels of UV radiation escaped from the bulbs in the form of UVC and UVA rays. In fact, the emissions were so strong that they had the capacity to burn skin cells and ultimately, to provoke melanoma. An earlier European study came to similar conclusions.

The researchers in the Stony Brook study specifically measured how UV light emitted by CFLs affected the cells that produce collagen and keratin, key components of human skin. In the first round of testing, they measured the effects of the artificial light on skin that was free of any cosmetic products. In the second round, they looked at the impact on skin that had been exposed to Titanium Dioxide, or Ti02, a common ingredient in personal-care products. Then they repeated the tests using incandescent bulbs of the same intensity as the CFL bulbs.

According to research director Dr. Miriam Rifailovich, “Our study revealed that the response of healthy skin cells to UV emitted from CFL bulbs is consistent with damage from UV radiation. Skin cell damage was further enhanced when low dosages of Ti02 nanoparticles were introduced to the skin cells prior to exposure.” The report goes on to explain that the effect was limited to the CFL bulbs. The incandescent lights did not affect the skin cells at all, either with or without the presence of the Ti02 particles.

In an article in Men’s Magazine, Dr. Rifailovich clarifies just how extensive the potential skin danger from CFL lights may be. She explains that the American Conference of Governmental Industrial Hygienists has established a “Threshold Limit Value” which is the amount of UV radiation exposure considered safe over an eight-hour period. The bulbs she tested “far exceeded” that eight-hour threshold within a mere 42 seconds.3 Smith, Bryan. “Uncle Sam’s Not So Bright Solution.” 2 May 2013. Men’s Health. 30 January 2015. http://www.menshealth.com/health/health-risks-fluorescent-lightbulbs?fullpage=true

“That means that if you sit under that bulb for eight hours,” she says, “you’re going to get a thousand times more [UV exposure] than you can really tolerate.”

Dr. Rifailovich further explains that such exposure damages more than the skin. The eyes also may be affected, because sitting under CFL lamps is “exactly like being in the sun.”

Industry advocates dismiss the Stony Brook study as unrealistic, pointing out that CFL bulbs are encased in glass that protects consumers from intense exposure. And theoretically, the protective coating painted onto the bulbs should do just that. But in fact, shipping and handling often damage the bulbs in just the slightest way, and even a tiny crack in the coating lets the harmful rays out. Dr. Rifailovich insists that the cracks she found in CFL coatings are the norm. She also notes that industry tests for safety may, in fact, use bulbs fresh off the assembly line, bulbs that haven’t gone through the shipping and handling, and so they don’t yet have cracks.

To make matters worse, a German study found that CFL bulbs emit not just radiation, but cancer causing chemicals including phenol, naphthalene, and styrene when switched on.4 Guignet, Duncan. “CFL Bulbs Contain Harmful Chemicals, Damage Your Skin.” 14 January 2013. Natural Society. 30 January 2015. http://naturalsociety.com/energy-saving-light-bulbs-contain-cancer-causing-chemicals/ The study, out of Alab Laboratory in Berlin, advised that CFLs should be used only for short periods of time, only in well-ventilated areas, and only out of range of human heads.5 Ward, Victoria. “Energy saving lightbulbs contain cancer-causing chemicals.” 20 April 2011. The Telegraph. 1 February 2015. http://www.telegraph.co.uk/news/health/8462626/Energy-saving-light-bulbs-contain-cancer-causing-chemicals.html

Of course, there are sound reasons for the phase out the incandescent. As we noted in a previous blog, “according to the Department of Energy, if every US household replaced just one light bulb with a compact fluorescent, we’d prevent greenhouse gas emissions equal to the emissions of 800,000 cars. Plus, experts point out that incandescent bulbs actually add more mercury to the environment than do the CFLs, because the coal-fired plants that manufacture incandescent bulbs are the biggest mercury polluters on the planet.”

So a return to the old incandescent bulbs isn’t necessarily a solution. In the meantime, if you’re using CFL bulbs, make sure that your lamps have good shades on them to filter the light, to sit far away from them rather than right under them, and to study this brief on the EPA’s recommendations for cleaning up the mess if a CFL breaks so as to not risk excessive mercury exposure. And by the way, vacuuming is the wrong thing to do, in case you thought you could bypass the instructions.

Oh, and If you’re thinking that LED bulbs will solve all these problems since they contain no mercury and use even less energy than CFLs, the bad news is that LED bulbs have problems of their own, including containing lead, arsenic, and other toxic chemicals.6 “The Dark Side of LED Lightbulbs.” 15 September 2012. Scientific American. 2 February 2015. http://www.scientificamerican.com/article/led-lightbulb-concerns/ Nevertheless, when balancing all the variables, they may still be the best choice, even though they’re considerably more expensive than CFLs.