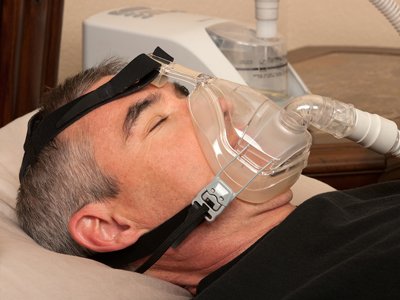 You go for a walk to try to get a little workout into your day. But as you pick up the pace or maybe start climbing a bit of an incline, you wind up huffing and puffing. You’re not considerably overweight, so what gives? Why are you feeling so unfit? The answer is that you are likely lacking in cardiovascular fitness and, according to new research, that may be due to a case of undiagnosed sleep apnea.

The study, which took place at the University of California, San Diego School of Medicine in La Jolla, found that individuals who have sleep apnea appear to suffer from decreased aerobic fitness levels compared to those without the condition.1 Preidt, Robert. “Sleep Apnea May Lower Your Aerobic Fitness.” WebMD. 3 December 2014. Accessed 10 December 2014. http://www.webmd.com/sleep-disorders/sleep-apnea/news/20141203/sleep-apnea-may-lower-your-aerobic-fitness The subjects were 34 men and women. Fifteen of them had been diagnosed with moderate to severe obstructive sleep apnea, while the remaining 19 participants had mild or no sleep apnea and served as a control group.

Each of the volunteers worked out on a stationary bicycle set to steadily increase in resistance to make the ride more challenging as it progressed. They continued pedaling until they were too exhausted to ride any longer. During the exercise, the scientists kept tabs on the subjects’ VO2 max levels, which represent the maximum quantity of oxygen the body can use during vigorous activity. They discovered that, on average, those with sleep apnea had a 14 percent lower VO2 max score than did their counterparts without sleep apnea.

This aerobic drop did not result from the people in the sleep apnea group being more overweight than those in the non-sleep apnea group, either. When the researchers compared subjects from the two groups who were approximately the same height and weight, they still found that those with sleep apnea had lower aerobic fitness levels.

The findings do not demonstrate that sleep apnea causes a reduced VO2 max measurement, only that there is a link between the two issues. And the study would have offered more compelling evidence had a larger population sample been involved. Including a more substantial grouping of participants might have also enabled the scientists to separately evaluate those at normal weights and those who were overweight or obese in order to conduct more extensive side-by-side comparisons.

At any rate, sleep apnea is a potentially dangerous condition that has already been shown to increase the risk of high blood pressure and heart disease, and, in a study earlier this year at Montefiore Medical Center in Bronx, New York, even hearing loss.2 Chopra, Amit; et al. “Sleep Apnea and Hearing Impairment In The Hispanic Community Health Study/Study Of Latinos.” ATS Journals. 20 May 2014. Accessed 12 December 2014. http://www.atsjournals.org/doi/abs/10.1164/ajrccm-conference.2014.189.1_MeetingAbstracts.A5335 And the condition is also often found in both people who are overweight and those with diabetes. So maybe it’s not such a far stretch to think sleep apnea might additionally impact the aerobic function of the body, even if we don’t understand the mechanics of it yet.

Obstructive sleep apnea, the most common variation of the disorder, involves a soft tissue blockage of an airway within the throat. Loud, persistent snoring and frequent daytime sleepiness are often symptoms of the condition. Sufferers actually stop breathing for short periods of time while sleeping, then gasp for air and typically awaken partially many times each night. This can result in broken, poor quality sleep, which carries its own potential hazards.

Now, with these new findings that sleep apnea may decrease our cardiovascular abilities added to the list of the condition’s possible complications, the long-term health prospects of sufferers become even more troubling. And it is estimated that as many as 80 percent of those with sleep apnea are undiagnosed, according to the Cleveland Clinic.3 “Commonly Undiagnosed Sleep Stealer: Sleep Apnea.” Cleveland Clinic. 16 August 2013. Accessed 12 December 2014. http://health.clevelandclinic.org/2013/08/commonly-undiagnosed-sleep-stealer-sleep-apnea-infographic So for the benefit of your overall health, if your significant other is complaining about your snoring and you are waking up regularly not feeling as if you got a sound sleep, it might be worth your while to get tested. You can use a CPAP machine to alleviate symptoms while you sleep, but there are other options if you’re not thrilled with the idea of wearing a mask hooked up to tubing every night. Simple changes such as losing weight, using special pillows, taming allergies, and wearing an oral device can address the underlying condition and reduce the risk of many of the issues to which sleep apnea may contribute. And for those of you who don’t care about money, there’s always the $8,000 Sleep Number® x12 smart bed.