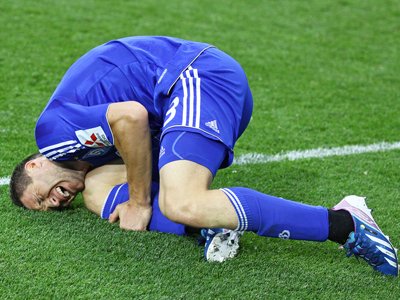 Most of us have seen at least one of those inspiring sports movies where the hero sustains an injury, but keeps playing through the pain and ends up leading the team (or himself–think Karate Kid) to victory . While such films celebrate the will to persevere in the face of physical adversity, in fact, doing so may have long-term harmful effects on the athlete. According to a new study just published in the American Journal of Sports Medicine, former college athletes are far more likely than the rest of us to end up with lifelong disabilities or chronic health conditions that interfere with daily functioning.1 Shute, Nancy. “Dunk Now, Pay Later: Elite College Players May Suffer in Middle Age.” 3 March 2014. NPR. 6 March 2014. http://www.npr.org/blogs/health/2014/03/03/285259022/dunk-now-pay-later-elite-college-players-may-suffer-in-middle-age

The study, out of Indiana University, followed 232 former Division 1 athletes who now were between the ages of 40 and 65. Forty percent of the athletes had participated in college football, while the others came from basketball, baseball, hockey, and so on. The researchers compared the health of these ex-athletes to a control group of 225 individuals from the same schools who didn’t play college sports.

You might expect that former athletes would end up strong and fit compared to the rest of us slobs, but as noted, the research team found that the opposite was true.  The athletes reported twice the incidence of health issues that limited their daily activities and that kept them from exercising compared to the non-athletes. They also had a considerably higher incidence of osteoarthritis, with 40 percent of them having been diagnosed with this condition, compared to 24 percent of the non-athletes. This makes sense given the fact that early joint injuries can trigger arthritis later in life. Also, the ex-athletes suffered considerably more fatigue, depression, and insomnia than the non-athletes.2 Simon, Janet, and Docherty, Carrie. L. “Current Health-Related Quality of Life is Lower in Former Division 1 College Athletes than in Non-Collegiate Athletes.” The American Journal of Sports Medicine. 6 December 2013. http://ajs.sagepub.com/content/42/2/423.abstract?sid=8f6d746f-d548-4b34-9ba2-a9b827f291da

The study authors say the problem is exacerbated by the fact that former athletes often feel frustrated by normal workout routines after their competition days are over.  Janet Simon of Indiana University, who directed the study, says, “A lot of athletes don’t want to work out on a treadmill. Division I players are used to playing at such a high level. If they can’t play at that level, they sometimes don’t want to do anything.”

Simon notes that while they remain in college sports, the athletes get plenty of support to help them stay fit and eat well. But, she says, “Many of the Division I sports are not lifelong sports, so it is important for the athletes to find sports and activities that can keep them active as they age. The most important thing is to stay active. You may be a former athlete, but unless you stay active your whole life, you may be decreasing your quality of life.3 Preidt, Robert. “For Many College Athletes, the Payoff is Lifelong Disability.” 5 March 2014. Medline Plus. 6 March 2014. http://www.nlm.nih.gov/medlineplus/news/fullstory_144947.html ”

The fact is, though, that most of the disabilities reported appeared linked not to inactivity, but to injuries sustained on the playing field during college.  Sixty-seven percent of the athletes said they had endured major injuries while playing college sports, and 50 percent had experienced some form of chronic injury. While injured, 70 percent of the athletes said they kept practicing and playing–a recipe for future disability.

It’s not surprising that 18- to 22-year-olds would opt to keep pushing themselves when hurt. After all, when we’re young, most of us think we’re invincible. College athletes don’t necessarily think about the long-term consequences of overdoing it, especially when they’re in the limelight. Even more, they may not realize how straining the body at an early age really can cause permanent health challenges later in life. While it’s perhaps glamorous to be a college athlete, there’s no glamour 30 years down the road when that athlete can barely move without pain. The word needs to get out to those young players so that they know it’s okay to quit when they get hurt–no matter the needs of the team or the whims of the coach.

In fact, it makes sense that the job of reigning in injured players should fall to coaches, but considering that coaches, even at the university level are paid to win, perhaps it’s no surprise that 70 percent of athletes reported that they played through injury. It appears that  very few coaches impose restrictions on their players when injuries occur. The drive to win perhaps trumps their impulse to protect their players.

At least some student athletes have seen the writing on the wall and are doing something about it. At Northwestern University, student athletes have launched a drive to unionize, asking for “better health benefits, better treatment of concussions and future medical treatment,” among other things. Given the reality that so many college athletes do end up with health issues originating at campus sporting events, granting these athletes long-term medical follow-up certainly seems justified, and it won’t be surprising if more college athletes jump on the bandwagon along with Northwestern.

If you aren’t a college athlete, by the way, the same rules apply. We’ve written several times about the dangers of overdoing exercise. While exercise absolutely is essential to maintain good health, there is a tipping point at which it can do more harm than good. For most of us, that point would involve far, far more exercise than we get, but those who run marathons, participate in endurance events, or spend hours at a time doing heavy lifting at the gym may want to research the long-term effects to make sure that the good that comes from these activities outweighs the harm.