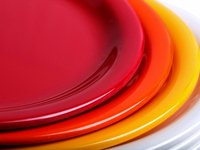 There’s already a long list of things to worry about when it comes to food choices–trans fats and additives and pesticide residues and GMOs, for example–but the list doesn’t end with the uglies affecting the food. Research shows that your dinnerware itself might also be harmful. A study recently published in The Journal of the American Medical Association found that subjects who used hard plastic dishes had elevated levels of melamine in their urine, especially if they heated those dishes in the microwave or used them to serve acidic foods that contain items such as tomatoes, fruits, vinegar, wine, and so on.1 Wu, Chia-Fang et al. “A Crossover Study of Noodle Soup Consumption in Melamine Bowls and Total Melamine Excretion in Urine.” 21 January 2013. JAMA Internal Medicine. 23 January 2013. http://archinte.jamanetwork.com/article.aspx?articleid=1558449#qundefined  If you would never deign to eat off of plastic tableware you aren’t necessarily in the clear, either, as ceramic dishes of all types, including expensive porcelain, also may leach unsafe and toxic chemicals In other words, you may be consuming toxins every time you eat, no matter how organic and pure your meal.

But first, let’s look at the melamine issue. Melamine is an organic chemical that gets combined with formaldehyde to form the resin that hard plastic tableware is made from. While melamine itself has low toxicity, according to the FDA, when combined with chemicals like formaldehyde, it becomes dangerous. Tests indicate that when it leeches into the human body, it can cause irritation to the eyes, skin, and respiratory systems; as well as cancer, kidney stones, kidney failure, and even death. In fact, melamine combined with cyanuric acid and then added to pet foods killed thousands of dogs and cats a few years ago.2 “Melamine Pet Food Recall — Frequently Asked Questions.” 7 October 2009. FDA. 23 January 2013. http://www.fda.gov/animalveterinary/safetyhealth/RecallsWithdrawals/ucm129932.htm It also sickened 300,000 babies in China in 2008, killing at least six.3 “2008 Chinese Milk Scandal.” Wikipedia. http://en.wikipedia.org/wiki/2008_Chinese_milk_scandal

Governments around the world clamped down on the amount of melamine allowed in food after these incidents (and by the way, melamine does appear in many food items in trace amounts).4 “Risk Evaluation Institute Issues Warning on Melamine.” 23 May 2011. TLC Parentables. 23 January 2013. http://parentables.howstuffworks.com/health-wellness/risk-evaluation-institute-issues-warning-melamine.html Both the World Health Organization and the European Union declared that a limit of a 0.2 mg/kg body weight was the daily tolerable intake (TDI). The US, though, saw no reason for alarm and so the FDA kept the TDI at .63 mg/kg for infant formula (three times the European limit), allowing 2.5 parts per million (ppm) in other foods. No regulation was imposed on dinnerware products since, after all, we don’t normally eat our plates. But the recent study found that participants who consumed hot noodle soup from melamine bowls had more than eight times the amount of melamine in their urine 12 hours after the meal compared to those who used ceramic bowls. Even more alarming was the fact that those who used the melamine bowls far, far exceeded the FDA daily limits (.63 mg) for safe intake, at 8.35 mg.

Not all melamine is created equal, according to the study authors, who note that, “The amount of melamine released into food and beverages from melamine tableware varies by brand, so the results of this study of one brand may not be generalized to other brands.” Nevertheless, the study sounds the alarm. Leeching of these toxic chemicals increases if the dishes are scratched or worn, or if they’re used for hot or acidic foods or heated in the microwave.

The study makes it obvious that using melamine for plastic dinnerware probably isn’t wise. But ceramic dishes also may pose a problem because glazes often contain inorganic heavy metals, particularly lead and/or cadmium that can be released into food. Inorganic lead can cause neurological problems, kidney damage, interference with bone and muscle growth, and learning disabilities as well as ADHD in children.5 “Lead and it’s Human Effects.” 24 January 2013. http://www.kingcounty.gov/healthservices/health/ehs/toxic/LeadGeneral.aspx   Cadmium can cause osteoporosis, kidney damage, cancer, and lung disease.

In 1970, the FDA began testing dinnerware to ensure its safety, which means that any dishes from after that date are more likely to be in compliance with safety standards.6 “Glazes and Decorations on Dishes.” 24 June 2003. Michigan State Extension. 24 January 2013. http://www.msue.msu.edu/objects/content_revision/download.cfm/revision_id.493632/workspace_id.-4/01500127.html The type of lead used in older dishes was more dangerous; now it’s compounded and it’s a bit less toxic. Still, most dinnerware today does contain lead and cadmium, and the FDA does allow that. In fact, an independent news station in Indiana conducted independent testing on 315 plates, bowls, and mugs from various retailers as well as some antiques.7 Segall, Bob. “13 Investigates: Lead in Your Dishes.” 11 May 2010. WTHR.com. 24 January 2013. http://www.wthr.com/story/12465018/13-investigates-lead-in-your-dishes They found that 36 percent exceeded safety standards for lead content, and one out of ten contained more than 30 times the recommended maximum. The dishes failing the safety test came from a variety of countries, including the US, and even plain white plates were among the culprits.

But the FDA says it’s not the amount of lead that matters; it’s how much leaches out. When the news station did leaching tests, it found three of the 18 plates it tested exceeding the FDA standards. By the way, the FDA standards do allow minimal amounts of heavy metal leaching from dinnerware, which might concern you if you consider that the effects are cumulative and there are plenty of other sources that you may well be exposed to. In other words, even plates that passed the leaching test may not be so safe over the long haul.

That’s particularly true once the glaze starts to break down. When you wash dishes in the dishwasher, over time the glaze starts to erode and then leaching can become significant. As with melamine, heat and acidic food also corrode the glaze. In other words, dishes that are relatively fine when you buy them may not be so safe a few years later. According to Sandy Spence, a spokeswoman for the Society of Glass and Ceramic Decorated Products, “If you have something that’s old, if you have something that has little crackles in it, if you have something that’s chipped, that could be a problem. Also, if you use a steak knife and you cut through the [plate’s] surface, there could be something that comes through that little scratch. That’s why it’s better to use things that are not marked up. Let me put it this way … if it’s chipped, I wouldn’t use it. If it’s old and you found it in your grandma’s attic, I might stay away from it.”

Note that even fine bone china may pose a risk. One of the main sources of leaching is borders and decals, including fancy gold decorations. Any dishes with raised designs should be avoided if possible.

If you’re ready to trade in your dishes, you might want to do some investigation to make sure you buy a safe brand. Some brands advertise that they’re lead and cadmium free, including Denby, Sengware, Hartstone Pottery, and Homer Laughin Fiesta. But if you don’t have the wallet right now to go for a new set, at the least avoid microwaving, dishwashing at high heat, and storing food in your dishes. Oh, and you just might want to do a heavy metal detox a couple of times a year — just to keep cleaning out anything that accumulates. 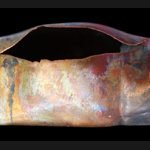 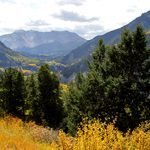 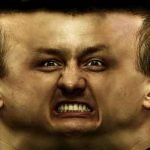