The Stress of Being in Charge 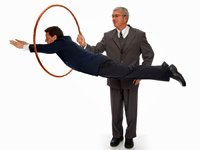 “Leadership is the art of getting someone else to do something you want done because he wants to do it.” –Dwight D. Eisenhower

When people are put in leadership positions, there is a certain amount of stress that comes along with them.  Even if, as President Eisenhower said, you can delegate some of the chores and tasks to be accomplished, you are still ultimately responsible.  That would heap the highest stress levels, right?  Not necessarily.  Depending on what aspects you focus on, leaders might even be less stressed out than their followers, according to new research from the Harvard Kennedy School in Boston.1

The subjects were a combination of 65 individuals classified as non-leaders who work in a variety of different industries and 148 individuals classified as leaders, taken from a pool of participants in a Harvard University executive program and military personnel.  Each volunteer answered a survey relating to the stress and anxiety they feel.  The scientists took saliva samples from them too, to measure how much cortisol–the hormone we over-secrete when under stress–was present.  Both the survey answers and the cortisol levels indicated lower anxiety in the leaders than the non-leaders.  In fact, the more power the leader wields, the less cortisol was measured and the less anxiety reported.

The researchers believe this is a clear indication that, although greater burdens may be placed on them, people in leadership positions don’t experience as much stress because they have more control and influence in their lives.  This lessens the amount of anxiety felt and the reactions to stress in the body, hence the lower cortisol levels.  In other words, bosses have more freedom at work than underlings do.  They can come in late or leave early, take a long lunch, and schedule meetings at their convenience.  The rest of the workforce, not so much. Plus, the salaries tend to be higher for leaders, which removes another element of stress.

However, this is not the only research that has been conducted on the stress experienced by leaders.  Other studies, in fact, are quite contradictory to these findings.  For instance, an experiment performed at Princeton University in New Jersey in 2011 discovered that, despite the plentiful perks, being an alpha male goes hand in hand with stress.2  The scientists followed a society of yellow baboons living in the wild in Kenya for nine years.  While the alpha male rules the other males, gets the choicest food, and picks a female to mate with, the stress levels of the alpha male were much higher than those of the beta males immediately below him in status.  The researchers tested the baboons’ feces and found that the alpha and beta males have similar sex hormone levels, but the alphas consistently have higher stress hormone levels.

For humans, it may work in much the same way.  The leaders often have to defend their position at the top of the heap, whether in the boardroom, at a sports match, in the political arena, or many other scenarios that require a leader to step up and take charge.  So perhaps in the current study, the leaders were in a relaxed place during the experiment, leading to low levels of cortisol production and anxiety-free responses to the questionnaire.  When they are actually participating in real life–such as a meeting in which the CEO is taking heat from the company’s shareholders (because, let’s face it, everyone has to answer to someone) for not fulfilling expectations for the quarter–the results would very likely be very different. Or perhaps, and I know this runs contrary to popular opinion, corporate executives and yellow baboons are not necessarily the same species. Perhaps executives are better able to appreciate the perks of power than baboons, thus reducing their stress and lowering their cortisol levels.

We know that when cortisol levels are increased, it eventually begins to affect the immune system, opening us up to not only lots of little illnesses that reduce our productivity, but also to obesity,3 heart disease,4 diabetes,5 and other major health problems over time.6  So, whether you are a leader or not, the end result is probably the same.  Take a run, do yoga poses, spend time quietly meditating…whatever works for you.  But find some way to relieve your stress on a regular basis or your health may one day suffer.