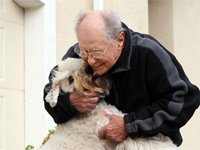 There are about 73 million pet dogs in the US.1 “How Many Pets are In the US?” Pet Place. 18 November 2012. http://webcenters.netscape.compuserve.com/homerealestate/feature.jsp?story=rainingcatsanddogs  Three-quarters of dog owners consider their canine companions family members. The majority of dogs sleep in bed with their owners, and books like Why Dogs are Better Than Men fly off the shelves. But as every devoted dog owner knows, the romance between owner and dog is short-lived; few dogs survive past the age of 13 or so. And that means that owners have to watch the inevitable decline in their dog’s health, as the beloved pet degenerates from a once exuberant pup to an older, pain-ridden, arthritic creature.

But now, there’s a potential fix on the market for canine arthritis, and in fact, it’s a fix that might also work for human arthritis in the future. Stem cell therapy for animals has been gaining popularity with pet owners and veterinarians alike, and many swear that it allows old dogs to perform new tricks like pups once again.

Currently, 4000 veterinarians in the US and Canada are licensed to provide stem cell therapy for pets.2 Shen, Helen. “Firms Developing Stem Cell Therapy for Ailing Pets.” 2 July 2012.  18 November 2012. The Bostson Globe. http://www.bostonglobe.com/2012/07/01/pet-stem-cell-market-thrives-thanks-looser-rules-doting-owners/HU4Q90QytTvaDf9zCKvu4O/story.html The treatment costs from $1800 up to $2800, depending on where you live. Amazingly, pet insurance often will cover the cost. The procedure works by removing fat tissue from the pet, then separating the stem cells from the fat, activating the stem cells with an LED light and injecting them back into the painful area. The whole process can be done in a single day in a vet’s office.

According to a Fact Sheet from the Woodside Animal Clinic in Royal Oak, Michigan, “Within two to three weeks, most animals that had been in severe pain with a restricted range of motion are able to walk, run and jump again.”3 http://www.michiganpetstemcelltherapy.com/animal-stem-cell-therapy-fact-sheet/

The website for Surf Paws animal clinic in Hawaii Kai, Hawaii, says, “This procedure is very safe.  The biggest risk is using anesthetic, to remove the fat tissue.  On a typical dog, this is easier than a spay, and the fat is collected in about 15 minutes by your vet.”4 http://surfpaws.net/stem-cell-therapy.aspx

Most dogs show improvement in about three weeks and continue to improve up to three months. They may require subsequent treatments in a year or so, but it’s far cheaper and easier the second time around as owners can “bank” stem cells from the first procedure for later use.

“This is the single biggest breakthrough I’ve seen in my career, and it isn’t going away,” Hutchinson says. “To me it’s like ‘Star Trek.’ I couldn’t ever dream of something like this in the past.”

Apparently, the therapy has been effective enough for it to catch on as a treatment for racehorses that otherwise would have been retired, although for horses, the procedure is more targeted to soft tissue injuries. According to veterinarian Bob Harman of Vet-Stem, his company has treated 4,140 racehorses and up to 80 percent have completely healed.

All this stem cell work on animals may well be clearing the way for widespread use of the technique in humans. Right now, stem cell therapy is not approved by the FDA for arthritis treatment in humans, although individual states and physicians can choose to administer it as an experimental procedure.

The human trials to date have concentrated on harvesting stem cells from bone marrow rather than from fat tissue.6 Neporent, Liz. “Stem Cells: Alternative to Knee Replacement?” 9 May 2011. ABC News. 18 November 2012. http://abcnews.go.com/Health/GMAHealth/stem-cell-treatment-ease-osteoarthritis-pain-offer-alternative/story?id=13550160#.UKl3xWd42Sp Again, the anecdotal reports are promising. Dr. Christopher Centano of Bloomfield, Colorado has treated 200 patients with stem cell therapy in lieu of knee replacement surgery. “Two thirds of them reported greater than 50 percent relief and about 40 percent reported more than 75 percent relief one to two years afterward,” he says. And it has been used by a number of Olympic and professional atheletes to improve performance. Kobe Bryant, of the Los Angeles Lakers, arguably one of the best basketball players in the world, used the therapy to literally rejuvenate his career in 2011.7 Alex Martin MD & Francesca Coxe, “Stem Cell Therapy Plays a Crucial Role for Athletes in the 2012 Olympic Games: Kobe Bryant, Dara Torres and David Payne.” MetroMD. 2012. (Accessed 18 Nov 2012.) http://metromd.net/stem-cell-therapy-plays-a-crucial-role-for-athletes-in-the-2012-olympic-games/

Advocates claim that unlike knee replacement surgery, stem cell therapy carries almost no risk. Plus, recovering from stem cell therapy is a walk in the park compared to recuperating from painful knee surgery. Most patients can walk the first day after the treatment. The downside is that insurance won’t cover stem cell treatment since it isn’t FDA approved and so the costs begin at $4000 for a single injection. Most patients require more than one.
Skeptics in the medical field (and that would most likely include most surgeons, who like to cut and sew) say that science hasn’t yet proven stem cell therapy is safe or effective in dealing with arthritis. “We need to have animal studies and analyze what’s really happening under the microscope. Then, and only then, can you start doing this with patients,” says orthopedic surgeon Tom Einhorn of Boston University.

And so back to the dogs. All those pets undergoing treatment are paving the way for their aging owners, who may one day require a very similar treatment.