Sleep Deprived Adults on the Job 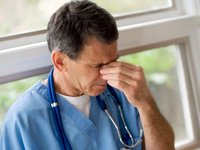 Thinking of scheduling a trip in which you take the red-eye flight to maximize your time away?  You might want to think again since, according to recent research, night-shift workers, especially those in the transportation, warehouse, and health care industries, are not getting enough sleep on a regular basis and are impacting the safety of everyone around them.

A new CDC report through the National Institute for Occupational Safety and Health in Washington, DC, found that at least 30 percent of all adults in the United States typically don’t sleep enough hours at a time to function optimally.1  Not surprisingly, those who are on the job during the night shift are often the most chronically sleep deprived and their job performance can suffer from it.

The researchers combed through information from the 2010 National Health Interview Survey to determine our sleep habits.  The typical adult requires between seven and nine hours of sleep per night to be well rested says the National Sleep Foundation.  However, this study’s findings show that lots of us don’t hit those numbers on a regular basis.

Of the people working a 9 to 5 daytime shift like the majority of us, 28.8 percent don’t sleep an average of even six hours per night.  But the night shift workers are much worse, with 44 percent of that group regularly sleeping too little.  And this can affect not only us, but all of those around us.  Imagine going to the emergency room in the middle of the night and being cared for by a chronically sleep deprived medical professional. You are at risk for everything from misdiagnosis to getting incorrectly medicated, not to mention numerous other potentially deadly mistakes.  Then there are the truckers driving through the night after only getting a few hours of sleep during the day. Dozing off while driving is responsible for up to 20 percent of car crashes in the U.S.

Age seems to make a difference in sleep habits and the effects of sleep deprivation as well.  Interestingly, it’s not the youngest of adults who experience the greatest lack of sleep.  While there is the perception that twenty-somethings are still in post-college mode, staying up late to date and socialize with friends before waking up early to go to their jobs, they are not the group with the shortest sleep hours on average.  That distinction goes to the 30 to 44 year-old crowd.  The most likely explanation?  Lots of people in their 30s and early 40s have recently started families and sleep deprivation is common and extreme among parents of infants.  Then, even after baby has started sleeping through the night, evenings and nights are often the only time to get things done after a day of work and bonding time with your child…which leads to a chronic lack of sleep.

A study last year at the University of Wisconsin-Madison found that when the brain isn’t getting enough sleep, it will literally start shutting down neurons while you are awake so it can get the rest it needs.2  By using the latest technology to monitor electrical activity in the brain, the researchers determined that some groups of neurons were truly asleep and other nearby groups were alert while the subjects were awake.  Unfortunately, the neurons that had fallen asleep were in an area responsible for decision-making processes.  Which brings us back to the frightening possibility of dealing with an emergency room doctor who’s been awake for too many hours straight. Eighty and one-hundred hour shifts are not uncommon for night time physicians.

While you may not be able to make sure your doctor has gotten a good night’s sleep, you can at least get the rest you need to ensure that your own decision-making capabilities are in tip-top shape.  Try to create a relaxing bedtime routine and go to sleep at the same time each day, whether you are working or not.  Avoid drinking caffeinated beverages for at least six hours before bedtime.  Also, as hard as it is these days to not be connected 24/7, don’t use any type of electronic media devices before bed.  That includes the television, computer, e-readers, and your cell phone.  A whopping 95 percent of participants in the 2011 Sleep in American poll taken by the National Sleep Foundation reported that at least several nights a week they were engaging in some form of screen-based technology close to bedtime.3  And 60 percent of them claim to have sleep issues either every night or nearly every night.  So skip the technology and make your bedroom a sanctuary where it’s dark and comfortable, promoting a good restful sleep every night.