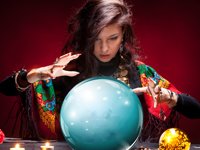 Based on the numbers, a huge segment of the population in the US believes in psychic ability and intuition. The psychic industry earns more than two billion dollars a year, with about 80,000 businesses offering some form of fortune telling.1 “Psychic Services in the US Industry Market Research Report Now Available from IBIS World.” 24 May 2012. PRWeb. 31 January 2013. http://www.prweb.com/releases/2012/5/prweb9538067.htm Surveys indicate that at least 15 percent of the population has consulted a psychic for advice.

Is there anything to the psychic’s claims? Do people really have the psychic ability to read minds or foretell the future–fake gypsy intuition aside?

That’s what scientists at some very reputable institutions have been trying to figure out for a long time now. A few years ago, a respected professor emeritus from Cornell University named Daryl Bern conducted a study that was published in the Journal of Personality and Social Psychology.2 Schindler, Max. “Professor Defends ESP Study on Colbert Report.” 31 January 2011. Cornell Sun. 31 January 2013. http://cornellsun.com/node/45491 He focused his experiments on precognition–the ability to know things before they happen. Dr. Bern found significant evidence to support ESP, a fact that roused his colleagues into a stir trying to disprove his findings. Not only were his fellow academics outraged that a rigorous scientific journal would take his data seriously enough to publish it, they also questioned his methodology and results. In response, the Journal editors, who reject 83 percent of all submissions, maintained that Bern’s study adhered to rigorous methodology and therefore deserved publication.3 Potter, Ned. “ESP Study Gets Published in Scientific Journal.” 6 January 2011. ABC News. 31 January 2013. http://abcnews.go.com/Technology/extrasensory-perception-scientific-journal-esp-paper-published-cornell/story?id=12556754

Bern’s experiments involved about 1000 undergraduate students. In one experiment, subjects were asked to view a computer screen that showed two curtains, and then to guess which curtain had a racy photo behind it. In reality, both curtains were blank. Still, the students rendered their guesses, after which the computer actually did randomly assign a racy photo to one of the curtains. It turned out that students picked the correct curtain more than 53 percent of the time, unknowingly anticipating the computer’s actions.

“Fifty-three percent sounds small,” Bem said in a guest appearance on the Colbert show. “But 53 percent is what Obama won over McCain … 53 percent is actually quite large…”

In spite of all the criticism and doubt his results garnered, Bern published detailed guidelines so that other researchers could duplicate his experiments, since duplication is the key to validating results. So far, two independent studies have taken up the challenge, but both failed to replicate his results, finding no evidence to support the reality of precognition. Does that mean Bern’s results are invalid? He says no.

“I believe that [the researchers] have made a competent, good-faith effort to replicate the results of one of my experiments on precognition….,” he says. “Nevertheless I consider it premature to conclude anything about the replicability of my experiments on the basis of this article…. In mainstream psychology it usually takes several years before enough attempted replications of a reported effect have accumulated to permit an overall analysis.”4 Radford, Benjamin. “Controversial ESP Study Fails.” 15 March 2012. Discovery News. 1 February 2013. http://news.discovery.com/human/psychology/esp-study-120315.htm Bern also noted that researcher bias and skepticism may have influenced the results.

The fact is, no matter how future duplication attempts turn out, there’s enough evidence favoring psychic phenomena that even the US government has taken it seriously, spending big bucks attempting to use clairvoyance to military advantage. The Stargate Project, which ran from 1972 to 1995, involved researchers from Stanford University and the Science Applications International Corporation (SAIC).5 “What is the Stargate Project?” WiseGeek. 1 February 2013. http://www.wisegeek.com/what-is-the-stargate-project.htm The secret project attempted to develop a group of military recruits to do remote viewing, which means to psychically see what’s going on somewhere else. The soldiers were trained to find hostages, missiles, guerilla bases, and so on, through psychic means.

Twenty million dollars later, the project was discontinued after recording some notable successes. One participant predicted the release date and medical condition of a hostage in the Middle East. Another wrote 30 pages detailing an attack on a US ship three days before the attack happened. Nevertheless, the Stargate final report said that although the 22 recruits had demonstrated some success developing psychic ability, it wasn’t significant enough to be useful for military purposes.

Some say that, in fact, the project was far more successful than the public statement allows, as most of the associated documents remain classified.6 “Talk: Stargate Project.” Wikipedia. 1 February 2013. http://en.wikipedia.org/wiki/Talk:Stargate_Project#.23   Tellingly, at the conclusion of the project, Time Magazine said the US military still employed psychics.7 Douglas Waller. “THE VISION THING.” Time Magazine Dec. 11, 1995 (Accessed 3 Feb 2013.) http://www.time.com/time/magazine/article/0,9171,983829,00.html#ixzz2JtBEbAIT

What does all this mean for you? The bottom line is that if your intuition tells you to do something (or not do something) regarding your health, it would probably be wise not necessarily dismiss it out of hand. The truth is that many people report having had remarkable flashes of intuition, but those same people might not have the sustained ability to predict what’s on a series of flashcards. Intuition seems to be a slippery thing that comes and goes. When it works, it truly can be jaw-dropping. Perhaps it represents a more mundane ability to think without thinking — or what Malcolm Gladwell calls  “blink.”8 http://www.amazon.com/Blink-Power-Thinking-Without/dp/0316010669  Or perhaps psychic ability represents one area that scientists ultimately can’t test using the scientific method. Because even if nobody ever duplicates Bern’s results, the fact remains that those jaw-dropping moments of miraculous synchronicity or remote knowing do occur, and enough of us have experienced them to keep the psychic industry robust.