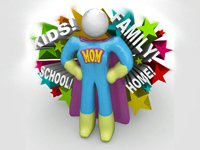 Ask most parents and they will tell you they are perpetually tired.  First, there are the many sleepless nights during your child’s infancy.  Then later, when you can sleep through the night again, there is the shuttling from one activity to the next, with few breaks in between.  After that stage of being a parent, it’s often about waiting up at night for your child to get home by curfew. And then, of course, in addition to all this exhaustion, there’s the fact that children are constantly bringing colds and flus and whatnot into the house.   One would think that parents would be prime candidates for all manner of illnesses and lack a healthy immune system. However, according to one new study, the truth may actually be just the opposite.

Researchers at Carnegie Mellon University in Pittsburgh, Pennsylvania, found that people who have no children are roughly twice as likely to catch colds as those who do have children.1  And the protection conferred by parenthood is cumulative — the greater the number of children you have, the less likely you will get sick.  The 795 healthy participants in this study were all exposed to a cold virus.  Approximately one-third of them got sick.  However, the subjects who have one or two children had a 48 percent lower risk of catching a cold, while those with three children or more had a 61 percent lower risk than the childless.

On the surface, that seems to make sense when you consider the facts.  After all, the more children you have, the more germs and viruses they are exposing you to.  This leads to higher immunity that a parent’s body has built up over time.  But, it turns out, that is not the protective factor for a healthy immune system.  Even after controlling for immunity to a virus, the results were heavily in favor of the parents staying healthier than those with no children.  In other words, those parents who did not have discernible levels of antibodies to the particular virus still were less likely to get sick. In fact, even those with grown children no longer living at home showed a remarkable resistance to catching the same colds their childless peers caught.

The scientists attributed the difference to a mental toughness that parents develop, which makes their immune systems stronger than those without kids.  An interesting theory, but one with no evidence behind it.  Research would need to be designed to prove that, if possible.  Maybe there is some sort of sturdiness or resiliency that enters the picture after having children, as we might picture the hearty frontiersmen and women back in pioneering days who often had large broods.  Then again, life expectancy rates back in the 1850s were only an average of 39 years old, so even if they weren’t getting many colds, more serious diseases were finding them instead.2

At any rate, even if we can’t pin down the exact reason for a healthier immune system, parenthood may have some boosting effect on our immunity.  So what do those of us who do not have children do to gain some parity and raise our immunity as well?  Start off by living a good, healthy lifestyle.  Getting enough sleep, eating nutritiously, and exercising every day will do quite a bit to jumpstart a sluggish immune system.  In fact, working out was shown in a 2010 study at Appalachian State University in Boone, North Carolina, to increase the amount of immune system cells present in the body.3  Just a 30 to 45-minute, moderately-paced walk was enough to raise levels of immunity boosters, keep them elevated for several hours after exercising, and have a cumulative effect in protecting against illnesses over time.

And of course, you can further safeguard your health with regular use of immune boosters to fight infection, strengthen tissues against assault by invading microorganisms, increase T-Cell production, and much more. Check out Part 2 of Jon Barron’s series on the Anatomy and Physiology of the Immune Systemin which he explores a whole range of immune enhancers.  You also might want to check out Part 4 of the same series in which he explains pathogen destroyers, which can help you eliminate any cold or flu virus that does manage to make its way into your body.

2 “Life Expectancy – Beyond the Statistics.” Weight of the Evidence. 17 February 2006. Accessed 23 July 2012. <http://weightoftheevidence.blogspot.com/2006/02/life-expectancy-beyond-statistics.html>.