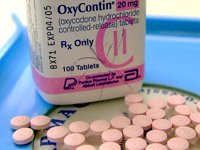 We all want to be as fit as possible before getting pregnant to have the best chances of giving birth to a healthy baby.  For many people, that means making dietary changes, losing some weight, or giving up bad habits such as smoking.  But what do you do if you are taking medications to help with pain or other physical problems?  According to new research, you might want to stop taking painkillers if there’s any chance you could get pregnant, since there appears to be an association between using certain common prescription painkillers shortly after conception and having a child with birth defects.

The study, which took place at the Slone Epidemiology Center at Boston University in Massachusetts, found that those women who were taking an opioid painkiller early in their pregnancy faced twice the risk of giving birth to a baby with a neural tube defect.1 Salamon, Maureen. “Some Painkillers Tied to Certain Birth Defects in Study.” WebMD. 10 September 2013. Accessed 18 September 2013. http://www.webmd.com/baby/news/20130910/some-painkillers-tied-to-certain-birth-defects-in-study   The researchers analyzed information obtained over a 12-year period in which telephone surveys were conducted with more than 20,000 women who had given birth in the previous six months.  They were questioned about all of their medication use before and during their pregnancy.

Of these participants, 305 gave birth to children with neural tube defects such as spina bifida, a failure of the spinal column to close correctly, and anencephaly, in which portions of the brain and skull are missing.  The infants were placed in three categories: those with neural tube defects, those who were born healthy, and those in whom other birth defects were present. Those subjects who reported using some type of opioid during what was termed “periconception,” covering the two months immediately following the woman’s last menstruation, were shown to have a baby with a neural tube defect in close to six in 10,000 live births compared to their peers, at a risk of less than three per 10,000 live births, who had taken none of these drugs.

While both the percentage was very small considering the overall size of the study and the opioids showed no correlation to the development of other forms of birth defects, doubling your risk is still doubling your risk. Neural tube defects can cause serious, lifelong health issues.  Spina bifida can result in growth problems, tethered cord, nerve damage, fluid on the brain, and a range of other disabilities.2 Liptak, Gregory S. “What is Spina Bifida?” Spina Bifida Association. 2012. Accessed 19 September 2013. http://www.spinabifidaassociation.org/site/c.evKRI7OXIoJ8H/b.8277225/k.5A79/What_is_Spina_Bifida.htm   Babies with anencephaly often die within a few days of their birth.  Neural tube defects most frequently develop during the first few weeks after conception, often before a woman even knows for certain that she is pregnant.

And painkillers are a very common mediation these days.  A 2011 study that took place at the Centers for Disease Control and Prevention in Atlanta, Georgia determined that between two and three percent of pregnant women use some type of opioid painkiller shortly before or during early pregnancy, and that doesn’t count all of the women who might use these drugs illicitly.3 “Opioid Pain Killers Linked to Increased Risk of Some Birth Defects.” Centers for Disease Control and Prevention. 2 March 2011. Accessed 19 September 2013. http://www.cdc.gov/media/releases/2011/p0302_opioidbirthdefects.html   In the current research, the opioids that were taken included Oxycontin, Vicodin, and Percocet, which are all frequently prescribed painkillers. Opioids are often used for pain relief, but they quickly can become addictive.  In some cases, the painkillers are prescribed for someone else–often a family member–and teens and young adults will start stealing a few to get high.  But as they need to get more to achieve the same effects, the addiction worsens, which is an even greater problem if the user is sexually active and accidentally becomes pregnant. Incidentally, birth defects are not the only problem. Deaths due to overdose of these drugs have increased by more than 400 percent in women since 1999, according to a July 2013 CDC report.4 “Prescription Painkiller Overdoses.” Centers for Disease Control and Prevention. 3 July 2013. Accessed 19 September 2013. http://www.cdc.gov/vitalsigns/PrescriptionPainkillerOverdoses

Not surprisingly, even with all of the information about the dangers of opioid use, plenty of physicians are still willing to pull out their prescription pads the moment a patient complains of pain. But there are alternatives. Magnetic therapy has been proven to relieve pain.  And natural, herbal-based pain relievers can block pain impulses from even registering in your nerves.  And if you do find yourself with an opioid prescription to treat severe pain due to a serious injury, it is certainly worthwhile to postpone any plans for getting pregnant.