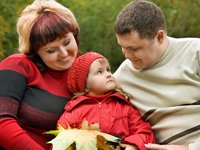 What makes a high risk pregnancy?  You might be guessing some pre-existing condition such as high blood pressure or diabetes, or maybe age, as more women are starting families later in life.  However, obesity might not immediately spring to mind.  After all, who isn’t overweight now? Yet new research shows that obesity pregnancy may be among the most important of variables when it comes to complications during delivery.1

The study, conducted at Central Baptist Hospital in Lexington, Kentucky, found that even first time mothers over the age of 40 had fewer pregnancy-related problems if they were at a healthy weight before conceiving than obese women their age.  In fact, they were very similar in statistics to younger pregnant women when compared by weight.

All of the older women in the study were more likely to have a C-section, perhaps because many obstetricians worry about those malpractice lawsuits.  Since age is “considered” a risk factor for complications in delivery, they don’t want to take any chances.  But although 55 percent of older women gave birth by C-section (and that is undoubtedly a high number), a whopping 69 percent of the obese older women had C-sections.  That’s more than two-thirds of the women in that age group!

And no matter their age, obese women were more likely to suffer from preeclampsia, a potentially dangerous condition in which protein collects in the urine and blood pressure becomes elevated.  Obese women were found to have preeclampsia twice as frequently as those at a healthy body weight.

The bad news doesn’t end there for pregnant women who are obese, either.  A study last year at the Centers for Disease Control in Atlanta found that stroke rates for women who are pregnant, or have just given birth, increased an immense 54 percent over the course of 13 years between 1994 and 2007.2  Why?  Mainly because there are a lot more women who already have high blood pressure and heart disease before they even conceive a child.  Approximately 20 percent of the women in American today are obese when they become pregnant, which is a major factor in both ailments. And now, recent studies indicate that maybe even autism is linked to obesity during pregnancy.

The obvious course of action for any obese woman at any age thinking of trying to become pregnant would seem to be to lose weight.  Eating a healthy, nutritious diet and exercising regularly will help to steadily shed those excess pounds and lower the BMI as well as the risk for so many illnesses, during the gestation period and after.  Despite recent trends in political correctness,3 it’s essential to take the term obesity to heart as an actual medical definition — not an insult — so you can get your health on track for many years ahead with your future family.4 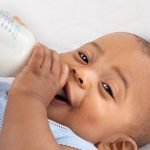 Gallery image with caption: Big Bottles Up a Baby’s Weight