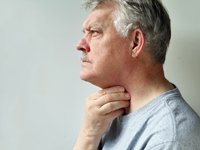 For doctors treating strep throat and sore throat symptoms, unnecessary tonsilectomies and the dishing out of antibioics may be a thing of the past due to new guidelines released by The Infectious Disease Society of America.

When you have a sore throat and feel awful and think you have strep throat, you might pay your doctor a visit, hoping to walk away with a prescription for antibiotics to make you feel better fast.  But, if new guidelines for treating sore throats are heeded by the majority of physicians, that will no longer happen.  Why? Because chances are very good that what you are suffering from is not strep throat at all, and therefore it is not going to respond to those antibiotics.  Any improvement in your symptoms over the next few days is simply because your virus has run its course and is going away. And remember, antibiotics have no effect on viral infections — only bacterial infections.

The Infectious Disease Society of America (IDSA) has revised its guidelines on the treatment of sore throats to correct several errors in care.1  One important difference is a recommendation to avoid unnecessary tonsillectomies.  Many physicians will opt for surgical removal of a child’s tonsils if the child experiences frequent sore throats or strep throat infections.  But studies have shown that the removal of the tonsils provides few advantages to a patient and even when it does, it is for the short-term only.2  The single exception that the IDSA made to recommend a tonsillectomy is for patients who have serious symptoms related to swollen tonsils that may result in breathing difficulties.

More than five years ago, Jon Barron was already explaining that tonsils often do not need to be removed.  Since the tonsils function as part of the lymph and immune systems, serving to protect the throat from bacteria, they may be continuously enlarged due to problems within the immune system.  If you boost immunity, they may very well shrink and the problem is solved naturally.  You can optimize your lymphatic system by using enzyme supplements, performing body cleanses routinely, exercising regularly, getting lymphatic drainage massages, and partaking in saunas and steam baths.

The other chief area in which the IDSA advocates are making a change is when doctors prescribe antibiotics for a patient who presents with a sore throat.  In the vast majority of cases, people who visit their physician to complain of sore throat do not have a strep infection but a viral infection.  Estimates show that approximately 90 percent of all patients have sore throats due to a virus that will not respond to antibiotics of any type.3  In fact, the chances of contracting strep are actually so low that the IDSA suggests not even testing most patients for it.

Strep throat is not particularly common in adults.  So the IDSA recommends that only those adult patients who come in to the doctor’s office with the right symptoms–typically a rapid-onset sore throat and fever and no other symptoms–even get a throat culture to test for strep.  All other adults, most of whom usually present with cold symptoms such as a cough and excess mucus production along with their sore throat, should be sent away with orders to rest and drink plenty of fluids rather than a prescription.

Since strep throat is a little more prevalent in children, the IDSA states that patients between the ages of three and 19 should be tested if they complain of sore throat.  Both a rapid strep test and a throat culture that is processed in a laboratory are considered appropriate.  The main reason for testing in this particular age group, aside from the fact that strep is more common in kids, is because they are at the highest risk for developing rheumatic fever from the infection.  This potentially dangerous complication can do serious damage to the heart, joints, nervous system, and skin.4

If physicians actually follow these instructions for before treating strep throat (of course, that’s a big if), this could potentially lead to far fewer prescriptions being written for unnecessary antibiotics.  Overuse of antibiotics has lead to tremendous problems of bacterial resistance and the creation of superbugs.  If we continue down the present path, it is likely only a matter of time before there will be no tools left in our arsenal that can fight off bacterial infections.  So let’s hope that doctors take it seriously and leave their prescription pads in a drawer except in the cases of confirmed bacterial strep infection.

Also, check out Jon Barron’s newsletters on how to build your immune system and how to naturally fight both viral and bacterial pathogens if infected. You might find these reports invaluable the next time you’re feeling sick.

Gallery image with caption: Your Kitchen May Not Be as Clean as You Think