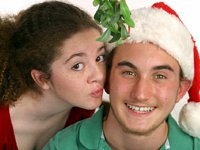 When you think of mistletoe, chances are the images you conjure up have to do with decorating for the Christmas holiday and stealing a kiss.  But as heartwarming a symbol as mistletoe can be, it may prove much more valuable than simply as a sprig to stand under for a smooch with a loved one.  New research has found that mistletoe may be a complementary therapy for fighting colon cancer.1 “Could Mistletoe Give the Kiss of Death to Cancer?” Science Daily. 30 November 2012. Accessed 2 December 2012. http://www.sciencedaily.com/releases/2012/11/121130094725.htm

The Fraxini mistletoe extract was also determined to be much less harmful to healthy intestinal cells than the chemotherapy drugs, which is really no surprise.  Anyone at all familiar with chemotherapy treatment is likely aware of just how sick it can make you, as it indiscriminately kills off all cells in the process of dividing–healthy cells right along with the diseased ones.2 “How chemotherapy works.” Cancer Research UK. 17 August 2011. Accessed 3 December 2012. http://www.cancerresearchuk.org/cancer-help/about-cancer/treatment/chemotherapy/about/how-chemotherapy-works   Some of the common side effects of chemotherapy use for colon cancer patients include sores forming in the mouth, nausea, diarrhea, rashes on the hands and feet, and hair loss.3 “Chemotherapy for Colorectal Cancer.” WebMD. 26 September 2009. Accessed 3 December 2012. http://www.webmd.com/colorectal-cancer/guide/chemotherapy

From a medical perspective, mistletoe extract might prove successful in some combination with chemotherapy for fighting colon cancer.  This research found that particular Fraxini concentrations acted as a booster, increasing the effectiveness of the chemotherapy drugs in destroying the cancer cells.  Or, even better, it may potentially be useful as a complementary therapy against colon cancer on its own, targeting the malignancies while leaving the healthy tissue for the most part undisturbed.  That is, if the big pharmaceutical companies, their high-paid lobbyists, and government regulators don’t get in the way to protect their man-made toxic chemicals.

The same hurdles do not exist in Europe as they do in the United States and Australia, where mistletoe is not widely used for treating any kind of cancer.  Across parts of Europe, mistletoe extract is considered an accepted treatment, frequently employed to combat malignancies.  In fact, many years ago, Jon Barron noted that mistletoe was a widespread cancer fighter in central Europe that is estimated to be incorporated into as many as 60 to 70 percent of cancer patients’ therapies.  There have been numerous studies in Europe, especially in Germany, that have reported the benefits of mistletoe extract in fighting several types of cancer, including pancreatic and breast cancer.  A National Cancer Institute review of more than 16 studies of mistletoe’s effect on cancer in humans found such results as tumor shrinkage, higher survival rates, improved blood counts, and better quality of life for the patients.4 “Mistletoe.” UC San Diego Moores Cancer Center. Accessed 3 December 2012. http://cancer.ucsd.edu/treatments/cam/therapies/Pages/mistletoe.aspx

Mistletoe is one of a number of blood cleansing herbs that have been put to use in traditional medicine for thousands of years, dating as far back as the ancient Greeks and Druids.5 “Mistletoe Extracts.” National Cancer Institute. 16 August 2012. Accessed 3 December 2012. http://www.cancer.gov/cancertopics/pdq/cam/mistletoe/HealthProfessional/page3 It is also a key component of Jon Barron’s blood cleansing formula. By removing toxic residues from your bloodstream and supporting your body’s assault on malignant cells, a good blood cleansing formula can help your body to resist cancer and tumor growth.  Formulas containing several beneficial blood cleansing herbs working together may also be useful taken regularly to maintain optimal health or as part of your personal detox program.

And, if you or a loved one does get a diagnosis of cancer, it is always good to be knowledgeable about alternative and complementary therapy options.  A treatment that incorporates mistletoe extract, along with other blood cleansing herbs, may not be the norm in many parts of the world, but it just might be an option that saves the life of someone you care about.