The Lingering Brain Effects of Concussions 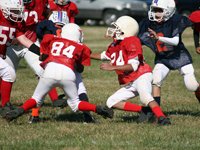 It’s a stressful experience for parents when their child is injured.  Especially scary is any type of trauma to the head.  You take your child to the doctor and a concussion diagnosis is the result.  The good news is that the obvious symptoms of most mild concussions are gone within a few days.  However, many parents don’t even bother with a follow-up visit to the doctor,1 “Follow-Up Visit a Must After a Concussion.” Kids Doctor. Accessed 20 December 2012. http://www.kidsdr.com/your-teen/new-follow-up-visit-a-must-after-a-concussion and those that do often receive clearance to return their child to normal activities, including sports, within a few weeks.  But now, there is evidence that we may be rushing forward a little too quickly. New research has found that children’s brains are still affected by changes even after all of the symptoms of concussion have abated.2 “Concussions Affect Children’s Brains Even After Symptoms Subside.” Science Daily. 11 December 2012. Accessed 19 December 2012. http://www.sciencedaily.com/releases/2012/12/121211193122.htm

The study, conducted at the Mind Research Network and the University of New Mexico in Albuquerque, found that even in kids with mild concussions that produce no obvious symptoms (think soccer), there are differences in the brain even several months after the trauma takes place.  Most of the previous testing that formed the basis of our knowledge about the effects of concussions was performed on adults.  But adult brains are not the same as children’s brains, which are still developing until they are 25 years old.3 “Concussion Facts.” Sports Concussion Institute. Accessed 20 December 2012. http://www.concussiontreatment.com/concussionfacts.html

The subjects in the experiment were 30 children between the ages of 10 and 17.  This age group has a relatively high likelihood of experiencing a traumatic brain injury, often due to participation in a team sport.4 Bakhos, Lisa L., et al. “Emergency Department Visits for Concussion in Young Child Athletes.” Pediatrics. 30 August 2010. Accessed 20 December 2012. http://pediatrics.aappublications.org/content/126/3/e550.abstract   Half of the participants had been diagnosed with a mild concussion and the other half were healthy.  Approximately two weeks after the injury, there were alterations in the structure of the white matter of the concussed brains.  White matter contains the fibers that transport information between the various regions of the brain.  At least three months after the traumatic event–long after all symptoms had disappeared–retesting showed that these changes were still in place within the white matter.

In fact, just looking at the scans blindly, the scientists could accurately determine 90 percent of the time which subjects had suffered a concussion and which had not.  However, since the research ended after the four-month period, it is not known at what point these changes finally disappeared, if at all.  Frighteningly, we don’t truly know whether complete recovery is ever made within the brains of children or whether we will see effects later in life from these changes.  We do know that the damage done by concussions appears to be cumulative, with successive concussions taking longer to heal and putting the child at increased risk of permanent neurological damage, including the development of dementia over time.5 “Cumulative Concussions.” Defense and Veterans Brain Injury Center. Accessed 20 December 2012. http://www.dvbic.org/cumulative-concussions

Head injuries have been linked to a tremendous increase in brain disorders among professional football players when compared to the general populace.  A study of nearly 3,500 retired players just this fall at the Centers for Disease Control and Prevention in Cincinnati, Ohio, found that they had three to four times the risk of mortality from Alzheimer’s disease, Parkinson’s disease, and amyotrophic lateral sclerosis than the rest of us face.6 Cook, Kevin. “Dying to Play.” The New York Times. 11 September 2012. Accessed 20 December 2012. http://www.nytimes.com/2012/09/12/opinion/head-injuries-in-football.html?_r=0   And these were all adult men, although chances are pretty good that they all began playing football at a very young age and quite possibly sustained at least one concussion during childhood.

If your child is not a football player, it doesn’t mean you can necessarily rest easy, though.  Almost all competitive sports carry some risk of concussion, and the worst offenders besides football are soccer, lacrosse, wrestling, hockey, and basketball.7 Barton, Lindsay. “Concussion Statistics in High School Sports.” Moms Team. 5 November 2011. Accessed 20 December 2012. http://www.momsteam.com/health-safety/concussion-rates-high-school-sports
Nor were the risks only for the boys–girls’ soccer and basketball both rank above the same sports for boys when tallying the rates of concussions. Make no mistake; girls’ sports are highly competitive.

Team sports can benefit your child in many ways, both physically and mentally.  But obviously no advantages gained are worth the prospect of serious brain issues later in life.  If your child does end up with a concussion, don’t depend on your pediatrician.  See a neurologist for more definitive answers and wait until all testing comes back clear before allowing your child to go back on the field.  A switch to a less competitive environment or athletic endeavors such as track that involve little or no contact may not be a bad way to go, either — assuming your little athlete is willing to go that route.