Getting Fat from Exercise

Sweating at the gym may do little more for your image than giving you an excuse to wear lycra, if a recent article in Time Magazine is to be believed. The article says the idea that exercise leads to weight loss may be wildly overblown. In fact, says Time, exercise excites the appetite, which in turn leads to eating, which in turn leads to paunch. Many exercisers do their workouts and then reward themselves with satisfying treats afterwards — you’ve probably seen the patrons in Starbucks, wearing snazzy sports clothing and ordering muffins and mocha lattes. While it’s true that you do burn calories when you jog or pedal or lift — if you reward yourself with post-exercise treats, you might be canceling out the benefits. In fact, you might find yourself getting fatter instead of skinnier.

The article cites the fact that more people than ever have gym memberships in the US, more people say they exercise regularly (57 percent of the population), and yet, obesity figures keep rising by startling amounts, with two-thirds of Americans now overweight or obese. If exercising did the trick, those obesity statistics should decline, according to the logic.

But the article goes beyond logic and also cites supporting studies and testimony from experts — evidence showing that in fact, all that effort on the treadmill may be for naught, if weight loss is your goal. “In general, for weight loss, exercise is pretty useless,” says Dr. Eric Ravussin, of Louisiana State University, a prominent exercise researcher. The article also cites a study that appeared in PloS One. The study divided a pool of 464 sedentary, overweight women into four groups, and assigned each group an exercise regimen of varying intensity, without any dietary restrictions. At the end of six months, those in the most rigorous exercise group, working out almost 200 minutes weekly with personal trainers, did not lose significantly more weight than those in the no-exercise control group.

So what’s going on, really? Is Time correct in implying that resistance [exercise] is futile, that aerobics won’t make you trim, that diet is the only route to eternal thin?

Well, a closer look at the article reveals that at the least, though it might not make you svelte, exercise makes you healthier. The article devotes only 108 words out of 3567 to this nugget, burying it in seeming insignificance. But in fact, the quest for beauty isn’t the main reason health experts suggest exercising. Losing weight so you can squeeze into your Levis certainly is important, but so is living longer and healthier. So many studies confirm that exercise leads to cardiovascular health, diminishes risk of cancer, slashes the risk of diabetes, and so on that there’s little to argue about on that front. Unless you really don’t care about longevity, the health benefits alone should be enough to inspire you to renew that gym membership.

As for why exercise doesn’t automatically equate to weight loss, there are three principles you need to address.

First, is a point I’ve dealt with many times. Caloric input must equate to caloric output or else you’re going to put on weight, plain and simple. As I’ve written in previous blogs, we now consume, on average, an extra 523 calories a day over what people typically consumed 28 years ago. Since we’re taking in more calories, we need to exercise more to burn those calories off. It’s simple math. In fact, to compensate for those 523 extra calories daily, you need to walk an extra 35 to 50 miles a week — just to maintain your weight at its current level. At a peppy 20-minute per mile pace, that adds up to about an extra two hours of breaking a sweat every single day, seven days a week! And again, that’s just to maintain, not to lose weight! Which means that those women assigned to the “heaviest exercise group” in the PloS study cited above simply didn’t exercise enough to shed pounds, assuming average caloric intake.

Then there’s the notion that you’ll drop pounds working out in the midst of a life otherwise spent slouching in front of the screen. In fact, researchers have found that vigorous exercisers may burn fewer calories than those who spend less time in exercise sessions but who remain active all day. According to the Centers for Disease Control, overall physical activity, including activities like walking and gardening, has declined in the past 15 or so years, even though more people have instituted regular exercise routines. Those routines just don’t make up for the hours and hours devoted to playing on Facebook. Several very recent studies of school kids have found no correlation between time spent exercising in gym class and overall physical activity. Experts say that exercising may, in fact, produce undesirable results if the exercise sessions punctuate a life otherwise marked by sloth.

“You cannot sit still all day long and then have 30 minutes of exercise without producing stress on the muscles,” says neurobiologist Hans-Rudolf Berthoud of LSU’s Pennington Biomedical Research Center. “The muscles will ache, and you may not want to move after. But to burn calories, the muscle movements don’t have to be extreme. It would be better to distribute the movements throughout the day.”

But all of the above pales in comparison to the most important principle: if you’re exercising, measuring weight is pretty much meaningless. You have to measure body fat. The problem is that muscle weighs more than fat. That’s why it’s possible, if you’re exercising heavily, to gain weight even while you’re losing body fat and slimming down. Here is a picture of LeBron James. He weighs 260-265 pounds. 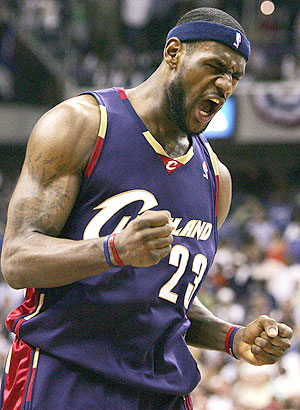 Try telling him that exercise doesn’t work. And while you’re at it, please tell Time Magazine that an article on exercise that evaluates the results based purely on weight misses the point.