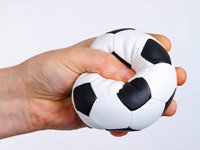 Have you ever participated in a sporting match of any kind where your next move could win it all…or lose the game for you?  Even if you are not an athlete, that kind of pressure can appear at many points in life, from making a presentation before a large audience at work to taking an important test.  If you ever worry about choking at a key moment, there is some good new for you.  A recent study found a very easy, effective way to avoid stress-related mistakes at clutch times: making a fist with your non-dominant hand.1

Researchers at Technical University of Munich in Germany found in three separate studies that by squeezing a ball or making a fist with their left hand, right-handed participants had less sports performance anxiety and performed better.  This has not been tested on any left-handed individuals, so it is not certain whether it would work for them as well.  But this trick is believed to be successful because the right side brain functions are responsible for the left side of the body.  When the right hemisphere of the brain is busy, there is less activity conducted in the left hemisphere.  It is the left side of the brain that is involved in our completion of complex motor functions involving analytical thought.2  And brain scans confirm that less activity in the left hemisphere can boost our performance potential. Think of it as “less is more.”

The scientists used three separate trials to compare the effect on athletes in different sports with varying skill sets.  Drawing from a pool of only right-handed individuals who play soccer, badminton, and judo, the experiment was set up to analyze their performance both at practice (therefore in a setting with low pressure) and at matches with a large audience or that were being filmed, which created a setting with a high level of pressure.  The researchers found that in each diverse sport, the participants were much less likely to make mistakes due to anxiety when they were gripping a ball in their left hand rather than their right hand before going to play.

This trick appears to be best suited to the kinds of actions that we might do automatically without thinking too much about them, such as swinging a racquet or kicking a ball — actions that rely on muscle memory, not analytical thought.  In fact, those are the very types of activities that athletes do very well when they are not overly focused on the mechanics, but screw up when they concentrate too hard due to self-imposed pressure.  And the researchers are testing their theory out on a number of other endeavors.  So far, all of their experiments have led to the same conclusion, even in activities as varied as gymnastics and musical performances.  They even suggest that it may prove successful for certain professions requiring precision and complex repetitive movements but laden with pressure, such as practicing surgery.

There could be benefits to using this technique for those with balance problems as well.  For instance, older people who are at greater risk of injury from falls, can get nervous just taking a walk, especially if they have fallen before.  And yet it’s crucial that they continue to exercise to prevent further weakening of their bones; so it becomes a Catch-22.  Stroke survivors and those with conditions that require rehabilitation to regain strength and mobility might also face less anxiety if they squeeze a ball or make a fist to keep the right side of their brains activated.  Many studies have shown that it is possible to improve brain function through such activities as playing a musical instrument or meditation.3  Maybe something even simpler can do our brains some good as well.

There is also the element of distraction that may help make forming a fist with the left hand a successful practice.  By focusing our thoughts and energies elsewhere, even just for a few moments, it may work to divert the attention away from growing performance anxiety and interrupt the patterns we have developed that cause it in the first place. And then there is the herbal/nutraceutical approach. Herbs such as ashwagandha and nutraceuticals such as L-theanine can stimulate the production of alpha waves in the brain, the brainwaves most associated with meditation, de-stressing, and relaxed focus — all right brain activities that de-emphasize the left brain.

Gallery image with caption: Make the Most of Bike Month