Earn Your Way to Happiness 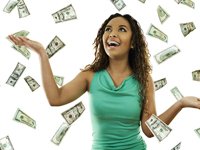 “Money is better than poverty, if only for financial reasons.”  — Woody Allen

Whether or not you consider money to be personally important, we all recognize that money is necessary for our basic needs and survival.  But how much we require to satisfy our desires and ensure our happiness is subjective to each individual.  Or is it?

A recent survey conducted by the Marist Institute for Public Opinion found that an annual income of $50,000 (in the United States) is enough to create a feeling of happiness.1  This was based on a telephone survey of 1,235 adults across America.  For these participants, the researchers found that $50,000 seemed to be the cutoff point below which a feeling of life satisfaction was not achieved.  Once people crossed that monetary threshold, they reported a happier, more positive outlook.

The poll questions covered contentment in numerous aspects of life, including personal relationships, health, living arrangements, neighborhood, employment status, and the path the individual has taken in general.  The volunteers who earned at least $50,000 per year reported more satisfaction in each of these areas than those who earned less than that amount.  In addition, those reporting a lower income were also less optimistic about the future.  The lower earners were less likely to define themselves as happy or to say their best years were ahead of them.  They were more likely, instead, to be concerned about their retirement years as well as managing any medical conditions that might crop up.

Obviously, there is nothing magical about $50,000. There are plenty of people who earn less who are happy, and plenty who earn more who are not. Nevertheless, the study revealed a strong “tendency” correlating money and happiness based on that amount.

Unsurprisingly, with the lingering post-recession economic malaise, the majority of survey participants reported going through some form of financial difficulty.  Nearly two-thirds reported a personal economic hardship within the past year and more than half had reduced their level of household spending.  More than one quarter said putting retirement off was a consideration and 14 percent had experienced a hard time making their rent or mortgage payments.

Perhaps all of this is a sign of the times — that our financial woes are continuing without much relief.  Also, its worth considering that just two years ago, researchers at Princeton University found that it took an income of $75,000 to make a person happy.2  Maybe the bulk of us have learned to be satisfied with less since then.  But truly, it would be interesting to know where the people who took part in either of these studies live.  Because the cost of living can vary so very much depending on where you call home.  In some countries, a $50,000 a year salary would translate to insane wealth…but that’s not the case in the United States.  And even within America, the cost of living varies widely depending on the state, city, town — heck, even within the same town. Perhaps then, it’s not the actual dollar amount that determines happiness and life satisfaction, but rather how your income compares to what your friends and neighbors are earning; thus, as incomes have dropped for so many people in the recession, it takes less to rank well amongst your peers.

In fact, a 2010 study jointly conducted at the University of Warwick and Cardiff University in the United Kingdom showed that more important than the actual income in a ranking of happiness was how a person compared in wealth to his neighbors.3  In other words, the proverbial “big fish” in the neighborhood, even if he only earns $30,000 a year, will consider himself more satisfied with life than the rest of the guys living on his block who earn $20,000.

Then again, a 2011 study that was part of the World Health Organization’s World Mental Health Survey found that among participants living in the 10 higher income nations, an average of close to 15 percent of the population had experienced a major depressive episode at some point.4  Participants from low to middle income countries, however, fared better with an average of just 11 percent, approximately, who had suffered through depression.  So clearly, happiness and life satisfaction can’t simply be about accumulating wealth. Just ask any Carthusian monk.

Ultimately, we’d all do well to put a little Zen philosophy into our lives and try to find some happiness and peace from within.  Live a healthy, honest life; make the most of your relationships; give back to the community; and do work that satisfies and fulfills you. And then, as the Beatles once said, “In the end, the love you take is equal to the love you make.” (The last line, in the last song, on the last album the Beatles ever recorded.)

Gallery image with caption: The Power of Negative Thinking (and Four Ways to Stop It)

Gallery image with caption: Too Much TV May Harm Your Fertility