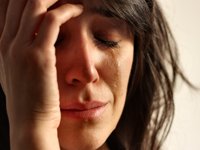 A new study, conducted by scientists at Gentofte University Hospital in Copenhagen, Denmark, found that the risk of developing depression and anxiety rises for anyone whose spouse has had a heart attack, fatal or not.

The death of a loved one, especially a husband or wife, can take a devastating toll.  That’s why there are so many bereavement support groups available through hospitals, senior centers, and community resources.  Those spouses whose partner survives a sudden health crisis such as a heart attack are considered the lucky ones.  But new research shows that the stress of the situation affects the “healthy” spouses as well, often causing pronounced spousal depression and/or anxiety.

The study, conducted by scientists at Gentofte University Hospital in Copenhagen, Denmark, found that the risk of developing spousal depression and anxiety after a heart attack is increased, whether the attack is fatal or not.1  Within the first year after the heart attack, if the partner passed away, the spouse was three times more likely to begin taking antidepressants.  When the mate survived the heart attack, the spouse was still 17 percent more likely to go on antidepressants.  And prescriptions for anti-anxiety medications rose in that population as well in the first post-heart attack year.

The researchers analyzed registries containing pertinent information including the marital status and health records of Danish citizens.  They tracked the data on 16,506 spouses of patients who died due to a heart attack and 44,566 spouses of those who survived a heart attack between 1997 and 2008 to determine who was being treated for depression or anxiety before the heart attack occurred as well as afterward.

Other research has focused on the effects of the death of a spouse, but this study was unusual because it looked at how the “healthy” spouse may still be traumatized even when their significant other survives.  Heart attacks may be worse than certain other health issues in a way, since they are generally unexpected and don’t provide time to mentally prepare for what is taking place.  Long-term illnesses may present sudden crisis moments, but typically patients experience a slower and more progressive decline, allowing loved ones to get accustomed to the idea of functions the patient may lose as well as their potential mortality.

Interestingly, the study also found that men were more likely than women to succumb to depression when their spouse had a heart attack.  In general, women have a higher rate of depression than men do.  However, men have a much higher rate of suicide, with nearly a four times greater death rate due to suicide than women.2

The researchers did not say for how long the average spouse stayed on the medication regimen, but earlier studies have found that use of antidepressants may increase the rate of relapse into depression.3  After stopping the drugs, many patients face recurring bouts of major depression at almost double the rate of those who simply tough out the bad times without the use of antidepressants.  Not to mention the serious, persistent side effects they can cause, such as nausea, dizziness, fatigue, insomnia, weight gain, anxiety, and a decrease in libido.4

Depression may very well be a normal reaction to a life-altering event such as a spouse having a heart attack.  Symptoms of depression include feelings of sadness that aren’t going away, hopelessness, anxiety, loss of interest in normal activities, fatigue, and trouble concentrating.5 If you feel yourself sliding into the blues, medication is not necessarily the best solution to your problem.  Plenty of natural remedies have been shown to help fight off depression and return people to a more satisfying outlook. And exercise has been shown to be as effective as antidepressants — without the side effects and relapse problems.