Dangers at the Beach 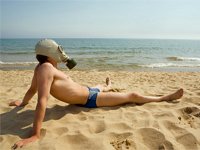 Colorful umbrellas, a cooler, waves gently lapping the shore — these things conjure images of glorious days at the beach. On sunny afternoons when the water sparkles, only pessimists worry about Jaws lurking under the surface. But in truth, your seemingly bucolic swimming spot just might be the site of dangers even Jaws should shun.

And no, the chief dangers aren’t rip currents that could sweep you into the deep blue, nor poisonous jellyfish waiting to sting, nor even potentially carcinogenic sunscreens. The dangers we’re talking about are those that come from out-of-control beach pollution. The Environmental Protection Agency says that more than 3.5 million people in the US get sick every year after coming into contact with raw sewage at the beach.1 The raw sewage can be in water that looks perfectly fine for a dip; you don’t necessarily know when your swim exposes you to a bacterial nightmare. That’s why the EPA says that 3.5 million figure, in reality, might be a gross underestimate. When people get sick after a swim at the beach, they don’t necessarily know it’s because the water was toxic, which means they don’t report it.

Contamination usually happens after a heavy rainfall when untreated waste washes into storm drains that empty right into the ocean. The rainfall can cause overflow at sewage treatment plants. Also, rivers and streams typically terminate by flowing into larger bodies of water, and after heavy rainfall, they carry debris, agricultural runoff, wildlife waste, industrial contaminants, and yes, sewage right to your favorite wading spot. So the pretty place where the river meets the sea may well be the most toxic location on the shore, as is the juncture where the stream dumps into the lake. And so rule of thumb number one is to take your swim far from where the river or stream empties into the beach; go to the other side.

The problem of beach polluted beaches is shockingly widespread, and the number of polluted beaches across the US continues to rise at a rapid rate. In 2011, the EPA issued a report evaluating 3,650 beaches.  A horrifying forty-three percent had been issued at least one warning for conditions that posed a risk to public health during the swimming season. The year before, 37 percent of all beaches had to be closed due to pollution, up from 33 percent the previous year. Looked at another way, between 2009 and 2011, the number of beach closings due to pollution spiked by 29 percent. At that rate, we’ll have no place left to swim (except chlorinated pools) 20 years from now.

While some of the beach closings were caused by the BP oil spill in the Gulf of Mexico, the overwhelming majority — or 70 percent — were due to bacterial contamination. For perspective, consider that the oil spill caused 10,000 beach closure, advisory, and notice days at 88 beaches in four states over a two year period. But bacterial contamination caused at least 27,000 precautionary and closure days in 2011 alone.

According to a report issued by the National Resources Defense Council, “Illnesses associated with polluted beach water include stomach flu, skin rashes, pinkeye, respiratory infections, meningitis, and hepatitis.”2 That gives a whole different cast to the joy of doing a back float.

And by the way, if you’re feeling smug about your pristine shore, assuming all the dirty beaches were near places like industrial Rahway, New Jersey, or Detroit, think again. Even idyllic tourist spots in Florida, Maine, and Hawaii showed contamination and suffered from closures due to pollution. For instance, in Hawaii, 209 beaches were closed in 2011 for a total of 3,116 days because of “brown water” contamination. The region with the highest number of days exceeding allowable levels of pollution was the Great Lakes, followed by the Western states. In a separate measure, the National Resources Defense Council determines which beaches exceed recommended pollution limits more than 25 percent of the time. In 2011, the states with the highest percentage of these major offenders were California, Illinois, New Jersey, Ohio, and Wisconsin.

It’s clear there’s a big problem at the shore. We’ve written before about how staph infection proliferates at the beach. A University of Miami study that found that 37 percent of all beachgoers who took a dip at a popular Florida beach emerged from the water contaminated by the bacteria that causes staph. But what’s to be done about all the pollution?

First, the beaches need to be cleaned up. Experts suggest various measures that could reduce runoff, such as using porous pavement, rain barrels, parks and street plantings to allow rain to collect naturally and keep it from picking up waste and running into drains. The NRDC report says, “These smarter water practices on land not only prevent pollution at the beach but also beautify neighborhoods, cool and cleanse the air, reduce asthma and heat-related illnesses, save on heating and cooling energy costs, boost economies, and support American jobs.”

Sounds good. Also, the NRDC is calling for more stringent standards to monitor beach water. The current EPA standards set an acceptable limit for gastrointestinal illness caused by bacteria at the beach of 3.9 percent, which means that it’s okay for one out of every 28 swimmers to get sick from entering the water. Plus, other illnesses caused by bacteria, such as earaches, bladder and sinus infections, and rashes — to say nothing of meningitis or hepatitis–don’t factor into the EPA standards at all.

Meanwhile, we can worry about the debris and radioactive seawater from Fukushima traveling across the Pacific and depositing itself on West Coast beaches. Radiation could add one more ingredient to the toxic stew brewing from sea to shining sea across America the Beautiful.

Best advice to you is to refer to the beach report  to find out how your local swim spots rate, avoid swimming after raining days, avoid places where the river and stream empty, and remember to beef up your immune system and detox regularly.