Body Language Tells Most About Emotion 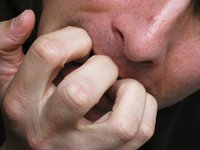 If you are wondering whether you are truly in the doghouse with your significant other after an argument, you might want to check your mate’s body language.  Reading facial expressions may give you some clues, but, according to the latest research on the topic, interpreting body language acts as a much more accurate barometer of our true feelings, especially when the emotions are intense.1 Ghose, Tia. “Is your partner mad? Body language says more than face.” NBC News. 29 November 2012. Accessed 5 December 2012. http://bodyodd.nbcnews.com/_news/2012/11/29/15550007-is-your-partner-mad-body-language-says-more-than-face

The study, which took place at Hebrew University of Jerusalem in Israel, found that facial expressions alone did not provide enough information for others to truly interpret that person’s state of mind.  Yes, the face was helpful for determining perceived emotions when it was combined with body posture, but it was primarily the body that told the story of what the person was feeling.  Note: the researchers were not focusing on subtle cues; the emotions expressed were at the extreme ends of the spectrum from elation to devastation.

The subjects in this experiment were broken into three groups of 15 people.  Each group viewed numerous images of top-seeded tennis players during clutch moments.  All of the photos were taken at important international tennis competitions as the player either won or lost a crucial point.  There was much at stake for the tennis players, and it was captured in these images during the most vital seconds in the match.

The volunteers saw only the players’ faces, only their bodies, or both faces and bodies together.  The participants were then questioned about whether the image depicted a positive emotion or a negative one.  Those who viewed bodies, whether or not a face was visible, were most often correct in their assessments of who was experiencing something very positive versus who was feeling very negative.  Conversely, the subjects who were shown only faces could not tell the happy from the sad.

Just to make things more interesting, the researchers also altered the images of the tennis players, grafting the faces of some during winning moments onto the bodies of some who had just lost and the faces of some losing onto the bodies of others as they won.  Once again, it was interpreting body language that distinguished the positive from the negative, as the volunteers correctly determined the perceived emotions based on the bodies but not on the facial expressions.

Even better, the participants had no conscious awareness of what they were doing. When the participants were asked about what details helped them to determine a positive emotion from a negative one, they claimed to be reading the clues from the face when studying a face and body together.  However, the findings make it clear that their reaction was most definitely to the body stance instead, which people then assigned to the face.  Perhaps that’s because we expect to determine emotion from facial expressions.  We learn from a young age to look into another person’s eyes, check the corners of their mouth to separate smile from frown, see if eyebrows are knitting together in anger, notice a wide-eyed look of surprise, and so on to assess what a person is feeling.  When parents feel their children aren’t picking up these cues, they usually try to teach them how to make sure they are socially adept.2 Borba, Michele. “7 Ways to Boost Kids’ Emotional Intelligence.” Michele Borba. 16 January 2011. Accessed 6 December 2012. http://www.micheleborba.com/blog/2011/01/16/the-emotional-iq-deficit-110-kids-unable-to-read-nonverbal-cues-why-its-a-big-deal

And maybe faces can provide us with a lot of information.  After all, there have been plenty of studies on how we successfully elicit social cues from the facial expressions of others.3 Matsumoto, David and Hwang, Hyi Sung. “Reading facial expressions of emotion.” American Psychological Association. May 2011. Accessed 6 December 2012. http://www.apa.org/science/about/psa/2011/05/facial-expressions.aspx   But, it would seem from this new research that the face is only part of the puzzle, and maybe not even the largest piece.

Or maybe, since it’s likely that few to none of the experiment’s participants are elite-level athletes like those in the images they viewed, it was harder for them to get a correct reading on facial expressions in those situations.  As anyone who has ever watched a tournament such as Wimbledon can attest, after several hours of playing in a match, the athletes on the court are sweaty, exhausted, and grunting through most points.  Even extreme happiness may appear like a grimace by then.  There is a theory called the “facial feedback hypothesis” that suggests that facial expressions signal the brain to produce corresponding emotional responses.  Therefore, as the volunteers mentally tried on the expressions they saw on players in the photos, the expressions might not correspond to what we would typically consider happy or positive.

Still, to be on the safe side with your mate, you might want to check out both facial and body cues to find out where you truly stand.  Together they will most definitely give you an accurate emotional reading, especially if all you are getting verbally is the dreaded, “I’m fine.”