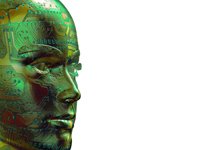 In that old TV favorite, Star Trek, the android character named “Data” at one point gets an emotion chip implanted in his brain to make him act more human. Without the brain chip, he’s dispassionate as a piece of toast. The brain chip gives him a sense of humor, but unfortunately, it also makes him nuts. That’s just science fiction–right?

Not exactly. Brain chips already are in use. Since 1997, Parkinson’s patients have been receiving “brain pacemakers” to help them control tremors. Earlier this year, the news carried stories about quadriplegic patients who received brain chips that allowed them to move robotic arms.1 But the existing brain chips only help patients to control physical processes, not to enhance cognition and decision making skills–until now.

An article in the Journal of Neural Engineering reveals that, in fact, scientists have developed a new type of brain chip that does, apparently, improve memory and decision-making–at least in monkeys.2 Plus, the brain chip seemed to repair brain damage. According to the article, the research focused on five rhesus monkeys at the University of Southern California and Wake Forest Baptist Medical Center. The monkeys underwent two years of schooling to learn how to pick particular images out of a group of images. When the scientists were confident that the monkeys could successfully choose the designated images with 75 percent accuracy, they went to work.3

The monkeys got fitted with sensors that were implanted in the pre-frontal cortex of their brains. This is the part of the brain associated with decision-making and logical thought. As the monkeys chose the right images, the scientists mapped the brain pattern that emerged. After getting a picture of what the brain looked like when the monkey made a correct choice, the researchers stored the pattern. Then, when the monkey was about to make a choice, the researchers used the device to stimulate the appropriate neurons to recreate the pattern of success in the monkey’s brains. They found an immediate 10 percent jump in performance.

Next, the monkeys got a dose of cocaine, which probably had an effect similar to the effect of Data’s emotion chip. The five high monkeys became mentally disorganized and had a hard time recognizing the familiar patterns, as cocaine is known for its ability to disrupt decision-making. Their performance fell by 20 percent.4 But when the researchers fed the brain-wave patterns back to the sensors and stimulated the target neurons, the monkeys not only recovered their ability to guess right–they had enhanced performance. In other words, the chips allowed the monkeys to act smarter, even when completely stoned.

What does the study mean for humans? The scientists hope that they can use the technology to help patients suffering from brain injuries and diseases such as stroke, Alzheimers, and dementia.

“The whole idea is that the device would generate an output pattern that bypasses the damaged area, providing an alternative connection in the brain,” said coauthor Dr. Sam Deadwyler of Wake Forest.5

The scientists believe they can create chips that could be safely implanted in human brains. The chips would fire at the appropriate times to “wake up” the brain. The scientists caution, though, that the feasibility of a human version isn’t yet clear, as it’s possible that every decision or scenario a human might face would have to be programmed in, which would make the chip the size of Manhattan island. More work needs to be done to discern how to make a practical human prototype.

If the scientists do manage to create a human “smart chip,” the development would simultaneously create a huge leap forward in neuroscience. At the same time–as those with paranoid tendencies might fear–it could also open the door to nightmare science-fiction scenarios where humans get cybernetic implants in their brains at birth to ensure they act in compliance with whatever the ruling forces prescribe–a home grown version of the Borg, to reference Star Trek one more time. But that’s paranoid thinking. There’s got to be a chip under development to help us bypass such patterns of worry.